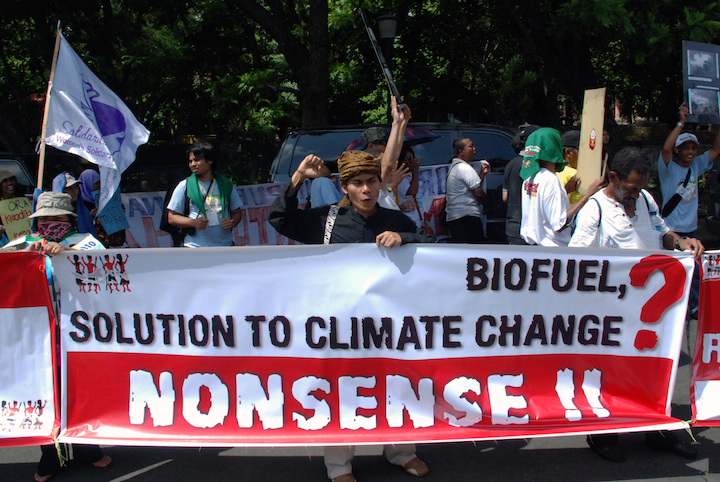 Above photo: By Orin Langelle, www.photolangelle.org.

10th February 2016 – 115 civil society organisations and networks from across the globe have published a declaration today, calling for bioenergy to be excluded from the next EU Renewable Energy Directive (RED) [1]. The declaration is being submitted to a consultation into the renewal of the directive for 2020 onwards [2].The EU intends industrial bioenergy, i.e. biofuels and wood-based biomass, to continue playing a major part in its new renewable energy strategy. Campaigners say this will exacerbate the grave impacts already being experienced because of current support for biofuels and wood-based bioenergy in the EU.  Bioenergy already accounts for around two-thirds of energy classed as renewable in the EU.Industrial bioenergy is not renewable.

The central premise of the declaration is that bioenergy should not be classed and supported as renewable energy, contrary to current EU definitions.  Campaigners point to growing evidence that industrial bioenergy is not renewable because it is not replenished as quickly as it is consumed. Worse still, carbon emissions from burning biomass for energy are often greater than the emissions from the fossil fuels they are supposed to replace.Devastating impacts of large-scale bioenergy on people, forests, climate.

The declaration sets out a powerful case for the exclusion of all forms of bioenergy from the new legislation, citing numerous examples of the harm that current EU bioenergy policy has done to people, forests and the climate.“The devastating direct and indirect impacts of large-scale bioenergy must be fully recognised and reflected in the new RED” said Teresa Perez from the World Rainforest Movement [3]. “We’ve joined with 115 other groups to send a strong signal to the EU that it must change its mind on bioenergy or risk doing far more harm than good. It’s clear that support for bioenergy in the EU is directly impacting forests internationally and the people that depend on them, promoting industrial tree plantations, as well as incentivising even greater carbon emissions.”Peer-reviewed studies and on-the-ground investigations show how industrial-scale bioenergy is not renewable [4]. Instead, it results in significant carbon emissions and fuels the destruction of biodiverse forests from North America to South-east Asia and Europe itself, which are vital carbon sinks. Biofuels in particular have become a major driver for land-grabbing in the global South and are, in many cases, linked to serious violations of land and labour rights.Standards and sustainability criteria will not address the problem.

Signatories of the declaration dismiss policy-makers claim that sustainability standards for bioenergy can mitigate potential negative impacts. Helena Paul from Econexus in the UK [5] states: “Standards and certification cannot address the fundamental issues of the scale of demand, and the scale of exploitation. Instead, certification helps to legitimise the destructive and exploitative practices by providing false reassurances. No regulatory body exists in the EU or elsewhere which has the capacity to verify, audit and sanction bioenergy supply chains.”

The EU is provoking a global expansion in industrial bioenergy use and the rapid development and expansion of a global trade in biofuels and wood-based bioenergy. Of all energy classed as renewable in the EU in 2012, bioenergy and ‘waste’ accounted for around two-thirds.

By including bioenergy in renewable energy targets, the EU is promoting direct and indirect subsidies for it, claiming that it is a sustainable alternative to fossil fuels. But according to the International Energy Agency, renewable energy is “energy derived from natural processes (e.g. sunlight and wind) that are replenished at a faster rate than they are consumed”. Bioenergy does not meet this definition as there is no guarantee that all biomass that is burned is replenished, and it is never replenished “at a faster rate” than it is consumed. Moreover, large-scale bioenergy is far from sustainable, as it relies on a major expansion of industrial agriculture, of monoculture tree plantations, and of industrial logging. These industrial activities deplete and pollute soils and water, destroy forests, grasslands and wetlands, and destroy the livelihoods of workers, farmers, Indigenous Peoples and other communities, particularly in the global South.

The EU claims to have a very ambitious climate policy and emission reduction targets. But this claim is built on the false premise that large-scale bioenergy is inherently carbon neutral, or at least “low carbon”. A growing body of evidence, however, shows that, especially when bioenergy is produced and used on a large scale, it tends to increase rather than decrease carbon emissions when compared to fossil fuels.

Many in the EU claim that the adverse environmental and climatic impacts of large-scale bioenergy can be avoided through the application of sustainability standards. However, standards applied to individual batches of ‘raw material’ cannot address an issue that is inherently one of scale: the very scale of industrial bioenergy is a problem in itself. Standards and certification schemes are applied only to specific loads of biomass or biofuel, and have no impact on overall scale and expansion. On the contrary, they may add to the problem by legitimising large-scale bioenergy use in the eyes of the public. Furthermore, as the Volkswagen scandal has shown, standards and even regulations are ineffective without strict independent enforcement, yet existing biofuel standards and proposed ones for biomass rely entirely on self-regulation by companies and their chosen consultants.

In the EU, bioenergy tends to compete with less carbon- and land-intensive renewable energy sources such as wind and solar power, rather than with fossil fuels, because it fits into the current infrastructure for the latter, so hindering real change.

Bioenergy can provide a sustainable energy option, but only when produced on a small-scale basis for local energy needs, and only if (for example) the health impacts of indoor smoke, especially on women, are taken into account. Small-scale local bioenergy schemes could still attract support, for example under Rural Development programmes. In fact, community-based bioenergy schemes often benefit from this type of support already, rather than from the subsidies that stem from the Renewable Energy Directive, which disproportionately boost large-scale industrial schemes.

The EU cannot be allowed to continue the current model of energy consumption, promoted through false assumptions about bioenergy being renewable, when its application at an industrial scale clearly is not. Claims of emission reductions are often false, and come at the expense of land, livelihoods, workers rights, forests, soil and water. The EU already bears great responsibility for the climate and biodiversity crises currently facing the planet. Claiming more land for bioenergy production, under the false premise that this is a contribution to climate protection, can only increase the already unacceptably high land footprint of the EU.

We call on the EU to end the current overconsumption of energy, and its huge impact on peoples and ecosystems globally, and to move towards a major reduction in energy consumption with all the changes in current development models that will imply.

A positive step and a good signal for the rest of the world would be to fully recognise the devastating direct and indirect impacts of large-scale bioenergy on people, territories, forests, and the climate, and to exclude bioenergy from definitions of renewable energy and from the next EU RED.

Notes:[1] The declaration can be found at www.biofuelwatch.org.uk/2016/BioenergyOut-declaration[2] The consultation, which closes today, 10th February, can be found at https://ec.europa.eu/energy/en/consultations/preparation-new-renewable-energy-directive-period-after-2020 .[3] http://wrm.org.uy/[4] Prior to the declaration, seven organisations published an evidence-based background briefing: Bioenergy Out: Why bioenergy should not be included in the next EU Renewable Energy Directive: http://wrm.org.uy/wp-content/uploads/2015/11/Why_bioenergy_should_not_be_included_in_the_next_EU_Renewable_Energy.pdf [5] http://econexus.info/