Above Photo: Lake Powell, photographed April 12, 2017. The white ‘bathtub ring’ at the cliff base indicates how much higher the lake reached at its peak, nearly 100 feet above the current level. Patti Weeks

The nation’s two largest reservoirs, Lake Mead on the Arizona/Nevada border and Lake Powell on the Arizona/Utah border, were brim full in the year 2000. Four short years later, they had lost enough water to supply California its legally apportioned share of Colorado River water for more than five years. Now, 17 years later, they still have not recovered.

This ongoing, unprecedented event threatens water supplies to Los Angeles, San Diego, Phoenix, Tucson, Denver, Salt Lake City, Albuquerque and some of the most productive agricultural lands anywhere in the world. It is critical to understand what is causing it so water managers can make realistic water use and conservation plans.

While overuse has played a part, a significant portion of the reservoir decline is due to an ongoing drought, which started in 2000 and has led to substantial reductions in river flows. Most droughts are caused by a lack of precipitation. However, our published research shows that about one-third of the flow decline was likely due to higher temperatures in the Colorado River’s Upper Basin, which result from climate change.

This distinction matters because climate change is causing long-term warming that will continue for centuries. As the current “hot drought” shows, climate change-induced warming has the potential to make all droughts more serious, turning what would have been modest droughts into severe ones, and severe ones into unprecedented ones. 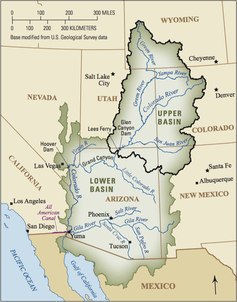 The Colorado River is about 1,400 miles long and flows through seven U.S. states and into Mexico. The Upper Colorado River Basin supplies approximately 90 percent of the water for the entire basin. It originates as rain and snow in the Rocky and Wasatch mountains. (Click to zoom.) USGS

In our study, we found the period from 2000 to 2014 is the worst 15-year drought since 1906, when official flow measurements began. During these years, annual flows in the Colorado River averaged 19 percent below the 20th-century average.

During a similar 15-year drought in the 1950s, annual flows declined by 18 percent. But during that drought, the region was drier: rainfall decreased by about 6 percent, compared to 4.5 percent between 2000 and 2014. Why, then, is the recent drought the most severe on record?

The answer is simple: higher temperatures. From 2000 to 2014, temperatures in the Upper Basin, where most of the runoff that feeds the Colorado River is produced, were 1.6 degrees Fahrenheit higher than the 20th-century average. This is why we call this event a hot drought. High temperatures continued in 2015 and 2016, as did less-than-average flows. Runoff in 2017 is expected to be above average, but this will only modestly improve reservoir volumes.

High temperatures affect river levels in many ways. Coupled with earlier snow melt, they lead to a longer growing season, which means more days of water demand from plants. Higher temperatures also increase daily plant water use and evaporation from water bodies and soils. In sum, as it warms, the atmosphere draws more water, up to 4 percent more per degree Fahrenheit from all available sources, so less water flows into the river. These findings also apply to all semi-arid rivers in the American Southwest, especially the Rio Grande.

The combined contents of the nation’s two largest reservoirs, Lake Mead and Lake Powell, since their initial fillings. The large decline since 2000 is shaded brown for 2000-2014, our 15-year study period, and pink for the continuing drought in 2015-2016. The loss was significantly influenced by record-setting temperatures, unlike a similar 15-year drought in the 1950s which was driven by a lack of precipitation. Bradley Udall, Author provided

Knowing the relationship between warming and river flow, we can project how the Colorado will be affected by future climate change. Temperature projections from climate models are robust scientific findings based on well-tested physics. In the Colorado River Basin, temperatures are projected to warm by 5°F, compared to the 20th-century average, by midcentury in scenarios that assume either modest or high greenhouse gas emissions. By the end of this century, the region would be 9.5°F warmer if global greenhouse gas emissions are not reduced.

Using simple but strong relationships derived from hydrology models, which were buttressed by observations, we and our colleagues calculated how river flows are affected by higher temperatures. We found that Colorado River flows decline by about 4 percent per degree Fahrenheit increase, which is roughly the same amount as the increased atmospheric water vapor holding capacity discussed above. Thus, warming could reduce water flow in the Colorado by 20 percent or more below the 20th-century average by midcentury, and by as much as 40 percent by the end of the century. Emission reductions could ease the magnitude of warming by 2100 from 9.5°F to 6.5°F, which would reduce river flow by approximately 25 percent.

Large precipitation increases could counteract the declines that these all-but-certain future temperature increases will cause. But for that to happen, precipitation would have to increase by an average of 8 percent at midcentury and 15 percent by 2100. 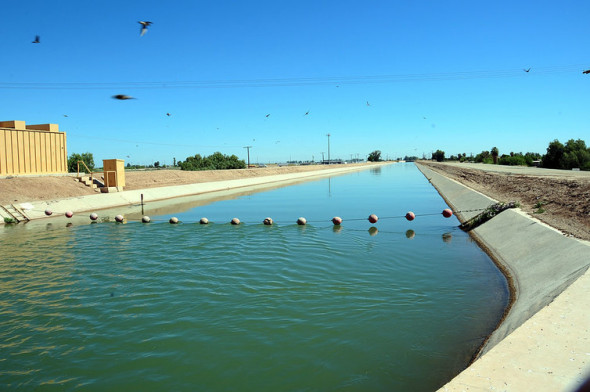 On a year-in, year-out basis, these large increases would be substantial. The largest decade-long increases in precipitation in the 20th century were 8 percent. When such an increase occurred over 10 years in the Colorado Basin in the 1980s, it caused large-scale flooding that threatened the structural stability of Glen Canyon Dam, due to a spillway failure not unlike the recent collapse at California’s Oroville Dam.

For several reasons, we think these large precipitation increases will not occur. The Colorado River Basin and other areas around the globe at essentially the same latitudes, such as the Mediterranean region and areas of Chile, South Africa and Australia, are especially at risk for drying because they lie immediately poleward of the planet’s major deserts. These deserts are projected to stretch polewards as the climate warms. In the Colorado River basin, dry areas to the south are expected to encroach on some of the basin’s most productive snow and runoff areas.

Megadroughts, which last anywhere from 20 to 50 years or more, provide yet another reason to avoid putting too much faith in precipitation increases. We know from tree-ring studies going back to A.D. 800 that megadroughts have occurred previously in the basin.

Several new studies indicate that with warmer temperatures, the likelihood of megadroughts skyrockets in the 21st century, to a point where the odds of one occurring are better than 80 percent. So while we might have periods with average or above-average precipitation, it also seems likely that we will have decades with less flow than normal. 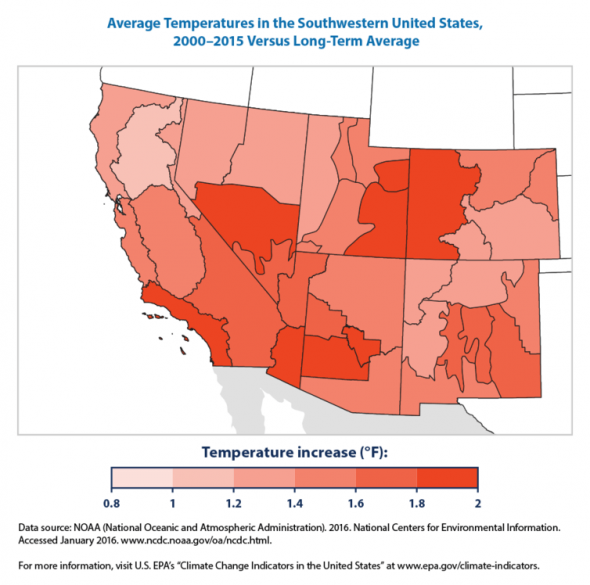 March of 2017 was the warmest March in Colorado history, with temperatures a stunning 8.8°F above normal. Snowpack and expected runoff declined substantially in the face of this record warmth. Clearly, climate change in the Colorado River Basin is here, it is serious and it requires multiple responses.

It takes years to implement new water agreements, so states, cities and major water users should start to plan now for significant temperature-induced flow declines. With the Southwest’s ample renewable energy resources and low costs for producing solar power, we can also lead the way in reducing greenhouse gas emissions, inducing other regions to do the same. Failing to act on climate change means accepting the very high risk that the Colorado River Basin will continue to dry up into the future.