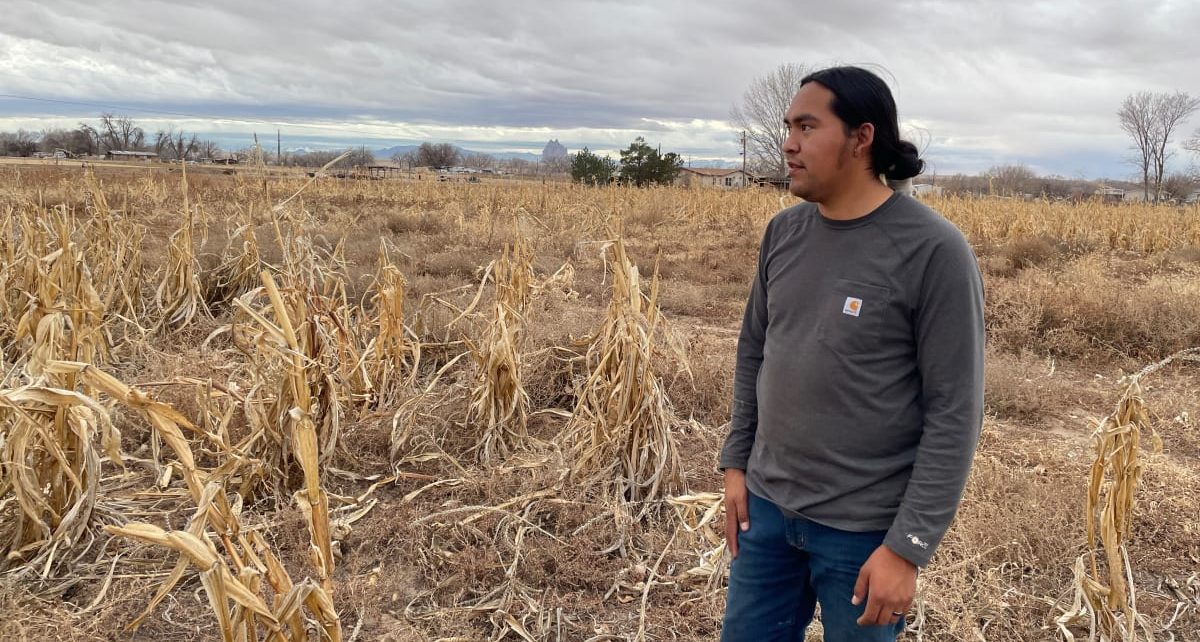 Above photo: Zachariah Ben walks through the corn fields of his family’s Ben Farms on Dec. 23, 2021. Ben worries about how the ongoing drought fueled by climate change will affect local farmers and ranchers. Pauly Denetclaw for Indian Country Today.

His tsiiyééł sits low on his neck and it’s clear that his dark brown hair is very long. Before him, on a black-and-white Pendleton blanket, sit two products — Bidii Baby Food and neeshjizzii — that share a common element, naadą́ą́, or corn. He’s already sold out of tádídíín, or corn pollen, this year, which sells fast during the summer and fall.

But tádídíín is not the only thing missing from the table. Over the summer, he offered a variety of melons grown at Ben Farms, owned and operated by his family, at different flea markets in the Four Corners area on Saturdays and Sundays.

In past years, Ben Farms grew only corn, but last growing season Ben decided to grow melons on the cornfield he manages. Farming puts food on the family’s table, gas in their vehicles and money for each of them to live. But he’s already concerned that it didn’t rain as much this year during the summer months, and that by late November it still hadn’t snowed.

“Right now, we should be, at least, under a couple of inches of snow,” Ben, Diné, told Indian Country Today. “But we’re having 60-degree days where we’re going out in our T-shirts by mid-afternoon. That is very worrisome.”

The Navajo are among tens of thousands of Indigenous people in the U.S. feeling the impacts of climate change. An informal survey by Indian Country Today found that Indigenous communities have been hit particularly hard by the changing climate, with some forced to choose between their homelands and their safety.

In coastal areas from Alaska to Louisiana and Florida, tribes are facing floods, rising sea levels, coastal erosion and increasingly powerful storms. In the Southwest and Plains, extreme drought and heat has taken hold, increasing the risk of wildfires and depleting water sources. All are facing the loss of their environment and threats to traditional foods and medicine.

In the arid climate of the Navajo Nation, any changes in precipitation have drastic effects on the land. From 1996 to 2009, extreme drought conditions in the Navajo Nation caused some 30,000 livestock to perish. The drought also lowered water levels in aquifers, making the water so salinated that it became unusable, leaving whole communities without water.

Snowfall levels, meanwhile, have consistently decreased in the area since the 1930s, causing 30 major rivers and other bodies of water to dry up by the 1960s. The combination forces Navajo families to haul water from 10 to 50 miles away, move into Navajo housing that has running water, or move away.

Unlike in some areas where tribal nations are relocating entire communities to escape devastation, the Navajo people aren’t leaving their communities because of climate change, though they are adapting to having less water.

“The predictions, or continued forecasting for the future, looks like drought, like what we’re experiencing now,” said Crystal Tulley-Cordova, a citizen of the Navajo Nation and principal hydrologist for the Navajo Nation Department of Water Resources.

“Concurrently, when it does rain, for example, there’s an increase for extreme precipitation events,” she said. “We did face some of that with the North American Monsoon 2021, where some of the communities in the southwestern portion of the Navajo Nation did see some flooding events, particularly in the Blue Springs and Dilcon areas.”

Ben comes from a long line of farmers who dry-farmed in the Colorado plateau near Sanostee, New Mexico, just 18 miles from where Ben Farms is located today in Shiprock, in the San Juan River basin.

It’s high-stakes farming for them and the community. The farm employs Ben, along with three of his siblings and father, and in summer months hires extra hands from the community to help produce the hundreds of pounds of dry steam corn they sell online and across the region.

The family takes extra care of the pure genetic makeup of its Navajo white corn, which can last for several years once it is steamed, smoked and dried, according to the website.

“It is not just a source of nourishment but a physical embodiment of our Holy People,” the website states. “Pollen is harvested for purposes of personal prayer to ceremonial usage and is a catalyst for prayer. White corn is an extension of who we are as Diné and as such understands our language, songs, prayers and our love.”

The biggest worry right now is the possibility of more extreme flooding events due to prolonged drying of the topsoil and decreased vegetation — which make the land act very much like a parking lot.

“When you think about water going over a parking lot the amount of water can accumulate fast, especially over a large watershed, and it can be an increased event,” Tulley-Cordova says.

Flooding is a worry during the monsoon season in the summer as well as after snowmelt runoff in the winter, particularly in places like the Chuska Mountains that run along the New Mexico/Arizona border. Ch’ooshgai is 60 miles long, filled with old-growth ponderosa pine trees, and peaks at nearly 10,000 feet. The mountain range is home to several Navajo communities, and the snowpack feeds local aquifers and seasonal streams and waters. It is one of six sacred mountains.

“Because of climate change, we’re starting to see less snowpack which leads to decreases in streamflow and it changes the timing of streamflow,” Tsinnijinnie said. “Instead of the snow melting later in the summer, it’s starting to melt earlier in the summer. This can lead to less recharge to groundwater, and less water in our river systems, and an increased risk for wildfires.”

The Asaayi Lake Fire in 2014 charred nearly 15,000 acres and burned down several homes on Navajo lands. It took 20 days for the fire to be fully contained. Several fires erupted in 2020 and 2021 as well.

Dry conditions and wildfires put other tribal communities at risk throughout the region.

”The dry season is prolonged,” Tsinnijinnie said. “That’s not just being observed on the Navajo Nation, but it’s being observed all across the Southwest.”

Less snowpack also means less recharge water for local groundwater, which decreases residents’ access to clean water. Water access continues to be a “wicked problem” on the Navajo Nation, according to a 2021 Water Resource IMPACT report.

Some relief is provided with settled water rights, like those from the Upper and Lower Colorado River basins. Ben Farms uses water from the San Juan River to irrigate its three cornfields.

“We simply are adapting our traditional methods of farming and adapting it to today’s time,” Ben said. “We can still farm and we can still use the same land that we’re on.”

Although climate migration is growing among tribal citizens in Alaska, Washington, Louisiana, North Carolina and other coastal states, Tulley-Cordova said Navajo citizens are more likely to move to tribal housing or off the reservations for reasons other than climate change.

The Navajo Nation spans New Mexico, Arizona and Utah, and some 37,000 people out of 174,000 who live on Navajo lands don’t have access to indoor plumbing. Nationally, about 13 percent of Native homes don’t have safe water or wastewater disposal; fewer than 1 percent of non-Native homes do not.

“The migration pattern may not be as extensive as, for example, some of the Alaska Native villages that have to move inland because of flooding,” Tulley-Cordova said. “It might look like migration to maybe more water but that also has different factors that may not be related directly to climate change. For increased convenience, people may move towards public water systems rather than living in very rural areas where they might have to continue to haul water.”

But tribal leaders are drafting plans for future droughts. In 2003, as streams and aquifers were drying up, officials drafted the Navajo Nation Drought Contingency plan to improve understanding of the effects of drought, including dune migration, wildfires, flooding and dry aquifers.

The Department of Water Resources, the Navajo Area Indian Health Service and the Navajo Tribal Utility Authority worked together to plan for short-, mid- and long-term strategies for potable water.

Despite how drastically climate change has impacted the Navajo Nation, however, Ben doesn’t plan on moving away from the Shiprock area.

“We Navajos are really good at adapting to our current living conditions,” he said. “We continue to thrive and that’s something that I take pride in. Our way of life, our culture, our heritage and traditions, have never been severed. We fought hard.”

Pauly Denetclaw, a citizen of the Navajo Nation, is Haltsooí (Meadow People) born for Kinyaa’áanii (Towering House People). An award-winning reporter based in Austin, Texas, she has worked for the Navajo Times and Texas Observer covering Indigenous communities, and her radio pieces have aired on KYAT, National Native News, NPR’s Latino USA and Texas Public Radio. She is a board member of the Native American Journalist Association. Follow her on Twitter, @pdineclah.