Above Monica Huertas and Gina Raimondo

One of them embodies white neoliberal feminism, the other is an extremely brave freedom fighter. How they respond to expanding fossil fuel infrastructure is a microcosm of what we can expect to see more and more in response to the climate crisis…

“Rhode Island Governor Gina Raimondo, a Democrat, squashed a letter by her own state health agency, which raised serious concerns about a proposed liquefied natural gas (LNG) facility in a densely populated Providence neighborhood. Documents obtained by DeSmog show that last summer Raimondo nixed a letter by the Rhode Island Department of Health (RIDOH) critical of National Grid’s Fields Point Liquefaction project right before it was to be submitted to the Federal Energy Regulatory Commission (FERC). FERC approved the project three months later.”

For years, Raimondo insisted the entire project was outside her oversight and totally under federal jurisdiction. Vardi’s report proves that was a lie and the Governor’s office played a major role in the approval process.

Raimondo’s decision to prevent RIDOH from submitting their letter to FERC may have been the pivotal decision that granted the LNG facility’s construction clearance by the federal government. This episode also showed yet again the hypocritical, useless nature of Sen. Sheldon Whitehouse, who postures and preens in the national media by pontificating on the floor of the Senate about the fossil fuel industry. Whitehouse, a former state Attorney General, had the ability and means to take a more proactive role but intentionally did not intervene.

At the heart and soul of this story are two mothers in Providence on opposing sides. One of them is Gov. Raimondo, ascendant Democratic politician with eyes on Washington, an embodiment of corporatized, middle class and white feminism. The other is the extraordinarily brave working-class Puerto Rican Monica Huertas, campaign coordinator for the primarily BIPOC-led environmental coalition No LNG in PVD. Raimondo lives in the elite neighborhood on the East Side while Huertas lives in South Providence, which is primarily Black and Latinx, with a large population of Dominican, Haitian, Cape Verdeans, and Puerto Ricans.

“If you want the facility and you want to pretend you care about the environment but you don’t care about this particular issue, okay, that’s fine. Do nothing and say nothing. But for her to actually do something against us and have the people who work for her not say what they wanted to say, it’s just disgusting,” Huertas said about the Raimondo revelations by DeSmog.

Click Here to Donate to No LNG in PVD!

Fields Point is an industrialized port at the top of Narragansett Bay in South Providence whose primary utility is the manufacture, transport, and storage of hazardous chemicals. When driving down Allens Avenue, which bisects this industrial zone, there is a noxious chemical smell that compels drivers to roll up the car windows and turn off the onboard air conditioning. Up the hill from this location are four public schools and one charter school. (See this report by FERC for more detailed analysis of the area.)

In September 2016, my friend and colleague Steve Ahlquist wrote “The project’s location, 642 Allens Ave, has a long history of industrial contamination dating back to the earliest days of the gas industry. Providence Gas Company operated a ‘manufactured gas plant’ from 1910 to 1954 which resulted in the release of many toxic substances which polluted the soil and groundwater. The site has also been host to an ammonia plant, a toluene facility, a propane works, and most recently an LNG storage facility. Numerous substances which pose a risk to public health, safety, and the environment have been recorded at the site, including polycyclic aromatic hydrocarbons (PAHs), total petroleum hydrocarbons (TPH), phenolic compounds, volatile organic compounds (VOCs) including benzene and naphthalene, polychlorinated biphenyls (PCBs), ferri­ and ferro cyanide compounds, asbestos, and metals including lead and arsenic. Many locations in the site contain multiple hazardous substances at levels that far exceed allowed standards, and while some specific areas have been remediated since 1994, the majority of the land has not been remediated.” (Read Steve’s extensive and extraordinary coverage of this story here, some of the best muckraking in New England.)

The impacts of a catastrophic disaster would very easily extend into other parts of Providence and the outlying suburbs. “It will affect us, people of color, that live in the immediate surroundings and will have a greater impact but that doesn’t mean it won’t impact those other people too!,” continues Huertas. “One of the tanks that is owned by Univar Chemical Facility has a 14 mile evacuation radius. That’s Cranston, Warwick, Riverside [in the city of East Providence], even Fall River [in Massachusetts]! It definitely is going to impact everybody if something were to happen!” 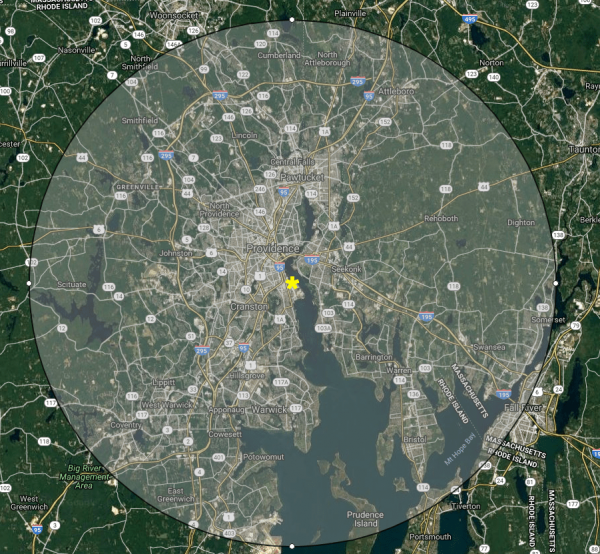 The DeSmog story showed Raimondo approved turning South Providence into an ecological wasteland. “We’re going to keep fighting, we’re not going to allow this to be a sacrifice zone for people of color,” Huertas told Vardi.

Since December 2015, I have built contacts with faculty members of several of the nearby schools and understand the various impacts of locating the educational population within such close proximity. Asthma and other respiratory illness rates in the wider neighborhood are some of the highest in the state and country. At Roger Williams Middle School, multiple faculty and staff members have been diagnosed with and even died of cancer and other illnesses. How much of this is caused by direct exposure to the atmospheric pollution from Fields Point? How much of this is caused by the combination of the atmospheric pollution with the materials within a building that dates back to the first half of last century and still contains building materials now known to be health hazards, such as lead paint or asbestos? What are the opinions of faculties and staffs of these schools about this? Were an industrial accident to happen during the school day, these workers could be at risk for serious harm, so what is their opinion?

“Some of the chemicals are not even legal to store like this in Massachusetts and Connecticut and yet we have them here in Rhode Island in South Providence! They are extremely dangerous, nasty, and dirty and there are no good things coming in and out of that port,” continues Huertas. “It is not any quality stuff coming in and out of our port! It’s junk!”

Huertas described encounters with problematic environmental organizations. “I tell them ‘Some of you guys do this for a living. You can mobilize quickly because you have privilege to do so.’ Most of the environmental groups in Rhode Island and all over are led by white folks,” she says. “You guys need to understand and realize that not everything is going to be fast-fast-fast because we don’t have the privilege so we can say ‘Okay, I can go at 6 o’clock and organize and come up with these great ideas’.”

“I’ve had to go against some really big people who ideally have some good ideas. But they don’t think about the whole picture because, of course, they don’t live in the neighborhood. They haven’t had to live my life and my experiences and if they don’t know people of color, they’re not going to think about that,” she says.