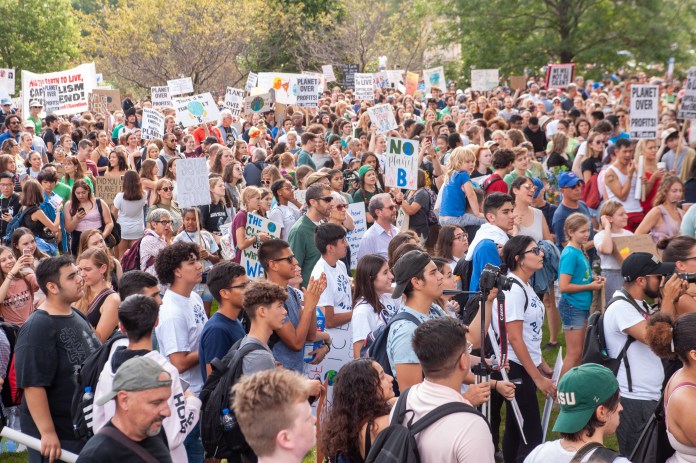 Climate Crisis Being Used As A Defense To Civil Disobedience

So what is reasonable conduct in the face of the mounting climate crisis? The importance of asking this question cannot be overstated.

The phrase “climate emergency” became part of the political lexicon this year. Governments at all levels made declarations of a climate emergency, as did various organisations such as the Australian Medical Association. Even the Pope joined in.

But what has this meant in practical terms? Very little so far, given the continuing rise in global greenhouse gas emissions.

For instance, the Canadian government’s decision to triple the capacity of an oil pipeline one day after acknowledging the climate emergency suggests the declarations have rhetorical and symbolic, rather than practical, significance.

Nevertheless, such official declarations make it clear climate change is, in fact, an emergency. And in light of its current and projected global impacts – including drought, catastrophic bushfires, increasing coastal inundation and erosion, flooding, melting ice caps, the demise of shallow tropical coral reefs, food and water shortages and massive relocation of populations – the emergency is both unprecedented and extraordinary.

Like all extraordinary emergencies, climate change requires an urgent and drastic response. As the emergency develops, our current understanding of what is reasonable and what is lawful will inevitably change.

Climate activists are making this argument by deploying a statutory defence in Queensland courtrooms: the extraordinary emergency defence in section 25 of the Queensland Criminal Code.

Greg Rolles, a climate change activist who erected a tripod over a railway line in north Queensland, unsuccessfully argued the defence during his May trial. And four Extinction Rebellion activists, including Rolles, intend to raise it in their trials in Brisbane on October 22.

What does the law say?

The defence permits law-breaking in circumstances of “sudden or extraordinary emergency” if:

an ordinary person possessing ordinary power of self-control could not reasonably be expected to act otherwise.

It’s a version of the common law “necessity defence”, which allows law-breaking to avoid greater harm or irreparable evil. This defence has been argued by climate activists in the US and UK for over a decade.

Using climate change as a legal defence worked in the UK in 2008 when Greenpeace protesters painted graffiti on the chimney of a British power station. A jury acquitted them of property damage charges on the basis of necessity.

And earlier this year, another UK jury acquitted Extinction Rebellion founder Roger Hallam and a fellow activist of similar charges. While the judge ruled climate change was irrelevant, the jury was persuaded by the defendants’ argument that their actions were a proportionate response to the climate crisis.

In the US, judges have been largely reluctant to let climate activists use this defence, and no climate activist has yet been acquitted of criminal charges when they do use it.

However, in 2018, a US judge downgraded the charges against pipeline protesters to civil infractions and then found them not responsible on the basis of necessity. And, in 2019, “Valve Turner” protester Ken Ward succeeded in having his conviction overturned, on the basis he should have been allowed to argue necessity as a constitutional right.

In Australia, no climate activist has been acquitted on the basis of the necessity defence.

But framing the “necessity defence” as an “extraordinary emergency defence” in jurisdictions like Queensland allows Australian climate activists to take advantage of the growing acceptance of climate change as emergency.

Still, they face difficulties in persuading judges that peaceful, non-violent acts of civil disobedience are a reasonable response to that emergency.

Youth litigants are highlighting issues of intergenerational inequity, such as in the Juliana lawsuit against the US government. The nature of corporate responsibilities is also under scrutiny, and there are ongoing legal attempts to hold the world’s biggest fossil fuel producers to account.

These developments foreshadow a tsunami of legal conundrums thrown up by climate change, as I discuss in my recent book.

We will have to confront the implications of widespread statelessness as territory disappears with rising sea levels. International law falls short in assigning criminal responsibility for the death and suffering to come from climate impacts such as more frequent and intense natural disasters.

What’s more, some human rights – including property rights, freedom of movement and the right to reproduce – exacerbate the climate crisis. At the same time, climate change jeopardises many of these rights.

If runaway climate change occurs, eminent commentators, including Justice François Kunc of the New South Wales Supreme Court and the United Nations Special Rapporteur on extreme poverty and human rights, have predicted the collapse of the rule of law itself.

So what is reasonable conduct in the face of the mounting climate crisis? The importance of asking this question cannot be overstated.

As novelist Amitav Ghosh has speculated, our time may come to be known as the Great Derangement: a time when reason failed to prevail, and through inertia, ignorance, apathy and avoidance we rushed heedlessly towards planetary catastrophe.

Attempts to avert this catastrophe through non-violent acts of civil disobedience will come to seem reasonable.