Climate Crisis Made Worse By Presidential Mis-Leadership Throughout This Century

By Kevin Zeese and Margaret Flowers, Popular Resistance
December 2, 2018
| Newsletter
Climate Crisis Made Worse By Presidential Mis-Leadership Throughout This Century2018-12-022018-12-19https://popularresistance-uploads.s3.amazonaws.com/uploads/2017/12/popres-shorter.pngPopularResistance.Orghttps://popularresistance-uploads.s3.amazonaws.com/uploads/2018/12/1flood-e1543802031859.jpg200px200px

Barack Obama, speaking to the Baker Institute, made sure the audience of wealthy Texans, many in the oil business, gave him credit for making the United States a world leader for oil and gas production. He said, “American energy production . . .went up every year I was president. And . . . suddenly America’s like the biggest oil producer, that was me, people,” eliciting cheers.

Throughout this century, even though the climate science was clear, presidential leadership has escalated the dependence on oil and gas, built infrastructure for pipelines and compressor stations, encouraged fracking in the US and around the world and prevented a global response to reducing carbon gas emissions.

This dereliction of consistent misleadership has put the planet on a dangerous path of climate crisis. In a just world, the political and corporate leadership of the United States would be held accountable. As it is, leadership for confronting the climate crisis must come from the people, not from political leaders.

Obama’s legacy confuses some people because, unlike President Trump, he did not deny climate change and, unlike President Bush, he did not come from the oil industry. But in reality, Obama watered down global climate agreements and grew oil and gas output and infrastructure in the United States.

As a newly elected president, Obama came to the Copenhagen climate summit in 2009 with the goal of weakening the agreement so there would be no internationally enforced reductions of climate gases. Ban Ki-moon, the UN general secretary, warned leaders that they held in their hands “the future of this entire humanity.”

NSA documents leaked by Edward Snowden showed that the US monitored communications between countries before the summit, and planned to spy on the negotiations during the conference. The NSA knew of China’s efforts to line up its negotiating position with India. Chinese negotiators entered the talks willing to undertake mandatory emissions cuts, but needed other major countries in the the developing world to agree. The US developed a strategy to stop China, indeed to make them the villain.

As the Copenhagen meeting was progressing, Obama, who had already “won” a Nobel Peace prize and was a political star as the first black president, flew to the meeting with Secretary of State Clinton. Obama and Clinton crashed a meeting of Chinese, Indian, South African and Brazilian leaders who were trying to agree on enforceable standards. The US made sure their agreement would not threaten US oil interests.

As a result of Obama’s intervention, the accord set no target for concluding a binding international treaty, leaving the implementation of its provisions uncertain and fueling criticism that it was more of a sham than a breakthrough. US intervention stopped a collective agreement among nations to reduce greenhouse gas emissions by 50 percent by 2050, which was included in earlier drafts. Obama also successfully prevented adequate US funding for climate justice policies for poorer countries and scuttled the UN Framework Convention on Climate Change agreed on in 1992.

Obama undermined the UN climate process and became known as “the man who killed Copenhagen,” said Greenpeace US head Phil Radford. Bill McKibbon said: “The president has wrecked the UN and he’s wrecked the possibility of a tough plan to control global warming. It may get Obama a reputation as a tough American leader, but it’s at the expense of everything progressives have held dear.” At the time, the UN’s Intergovernmental Panel on Climate Change (IPCC) warned that world emissions need to peak by 2015 to give any chance of avoiding a 2ºC rise.

Obama declared a phony negotiating victory for the climate in Copenhagen and went on to make sure the Paris Accords also contained no enforceable standards, making it an inadequate treaty for the climate crisis. Climate scientist James Hansen called the Paris agreement a “fraud” of “worthless words.”

Domestically, after running against “drill baby drill” Republicans, Obama governed in the era where fracking became widespread, off-shore drilling increased and massive oil and gas infrastructure were put in place. In 2012, Obama said, “We’ve opened up new areas for exploration. We’ve quadrupled the number of operating rigs to a record high. We’ve added enough new oil and gas pipeline to circle the Earth and then some.” Obama fast-tracked the approval process for oil and gas infrastructure at a time when scientists were saying we should build no more carbon-polluting infrastructure. While he delayed portions of the high profile Trans-Canada pipeline, his administration approved the equivalent of ten Keystone pipelines.

Under Obama, while there was a decline of 37% in coal production, gas production vastly increased by 34% due to fracking. Obama presided over the highest gas production in history and crude oil production rose by 88%, the fastest rate in the 150-year history of the U.S. oil industry. On the positive side, his tenure was also timed with big increases in solar and wind energy. Obama also deserves credit for putting in place fuel economy and emissions standards for cars.

Obama’s bragging about increasing US oil and gas production at the Baker Institute came shortly after the dire October IPCC report, which warned the world has 12 years to put in place a radical transformation of the energy economy to prevent climate catastrophe, and the November 23rd release of the 4th National Climate Assessment, which warned of the serious impacts of the climate crisis in the United States. In this environment, Obama took credit for this crisis situation that will kill hundreds of thousands, cause mass migration and trillions of dollars in damage. 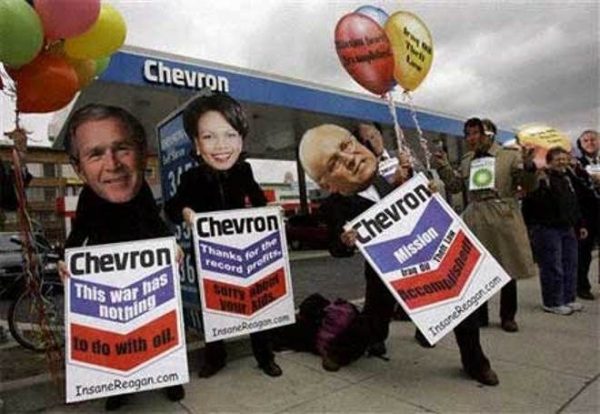 Despite the above, Obama’s presidency looks good in comparison to the George W. Bush administration, which denied climate science. and was marinated in oil with deep oil connections. Climate scientists were kept out of meetings to develop energy policy while the oil and gas industry worked closely with the administration.

President Bush was in the oil industry for more than two decades and came from an oil family. His investors included the bin Laden family and other members of Saudi Arabia’s oil-wealthy elite. Bush called the Saudi ambassador, Bandar bin Sultan Al Saud, “Bandar Bush” because he was so close to the Bush family.

Vice President Cheney was CEO of Halliburton, one of the world’s largest providers of products and services to the oil industry. Cheney developed energy policy in secret meetings with the oil industry. He fought to the Supreme Court keep information about those meetings secret from the public.

National Security Adviser Condoleeza Rice was a director of Chevron and Secretary of Commerce Don Evans was head of an independent oil company in Colorado. Former Enron CEO Kenneth Lay was George W. Bush’s most generous campaign contributor. Bush received more campaign contributions from oil companies than any other administration in history.

The Bush administration ignored climate change for eight years, wasting precious time. Bush invaded and occupied Iraq in what was a disastrous war for oil domination. In 2008, President Bush’s last year in office, the US produced 1.06 billion metric tons of coal — an all-time high. 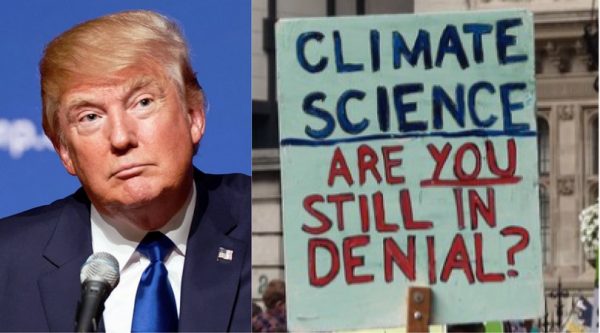 As bad as previous presidents have been, President Trump’s climate denial policies have reached a new low for presidential misleadership.

When the recent National Climate Assessment revealed that global warming is causing ongoing and lasting economic damage, President Trump denied the findings of the 13 federal agencies who wrote it. Trump said, “I don’t believe it,” while noting he has “very high levels of intelligence,” and had his political appointees and press secretary attack the report.

Trump appointed the former CEO of Exxon Mobil Corp., Rex Tillerson, as Secretary of State and appointed other  industry supporters, e.g., Rick Perry at the Department of Energy, Interior Secretary Ryan Zinke and EPA administrator Scott Pruitt, now replaced by industry lobbyist Andrew Wheeler. Trumps’s policy is “Energy dominance,” the expansion of coal and oil production as well as the weakening of environmental regulations, including those that address climate change. 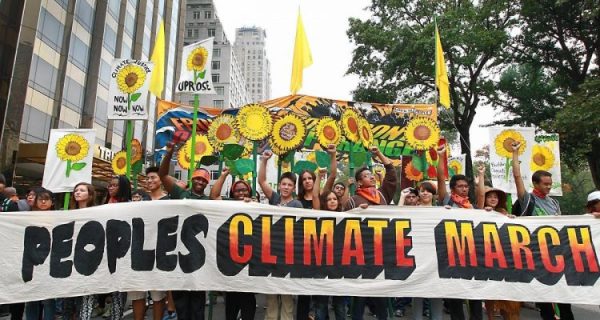 Climate Justice From the Bottom Up

The science on climate has been known since 1990 when the first international agreements to combat climate change were negotiated. Since then, the science has only become stronger. We must not produce any more gas-fueled cars or build any new power plants or buildings of any kind unless they are replacing old ones or are carbon-neutral. When we build a factory, power plant, house, automobile or anything else that uses energy, we are committing to using energy through that structure for up to 40 years, depending on its lifespan.

This century has shown that facing up to the challenges of climate change will not come from the top of the US political system, which is polluted by the oil and gas industry as well as investors who profit from carbon pollution. Change is going to come from the bottom up.

Recently, we have seen how activity from below can impact political reality. The Green New Deal, developed in 2007 by Green Party activists, is now being taken on by Democrats. Establishment Democrats and Republicans will fight it, but it is making its way onto the agenda and will become reality if people keep mobilizing for it.

The Extinction Rebellion, started in the United Kingdom, is growing around the world. And there is now a call to build towards a general strike in September with actions throughout the year, beginning on January 15. Follow #EarthStrike.