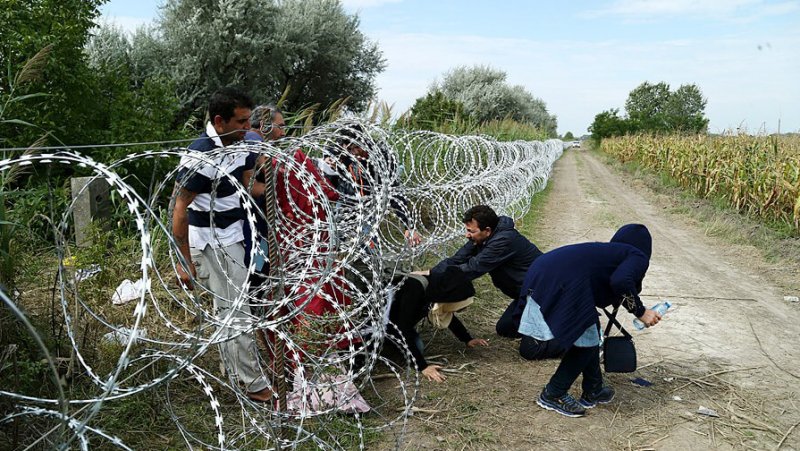 Above Photo: Migrants in Hungary near the Serbian border in 2015. Image: By Gémes Sándor/SzomSzed, via Wikimedia Commons

There’s hope for many people seeking better lives as generosity offers them a real welcome. But for climate migrants serious doubts persist.

LONDON, 22 January, 2020 − If you are a climate migrant, how urgent is urgent? Slowing, or even stopping, the damage humans are doing to the physical world through profligate use of fossil fuels and casual extermination of other species is urgent. But what we are allowing fellow humans to tolerate is just as urgent, though often less remarked.

Many millions more will be forced to flee their homes in a world experiencing intensifying climate breakdown. Some will move within national borders, and many others will cross them. The UN body that monitors migration is the International Organisation for Migration, whose data portal provides recent estimates of the numbers of migrants globally.

It says 17.2 million people were forced to flee by disasters, many climate-related, in 2018 alone. The World Bank estimates that by 2050 143 million people across three global regions could be displaced within their countries by climate breakdown.

Their plight is urgent. But there are strenuous efforts to tackle the problem; movements to welcome migrants − and refugees − and offer them hospitality are growing, from the initiative for sanctuary cities in the US to villages in southern Europe.

The initiative is needed more than ever, as President Trump issued an executive order in 2017 seeking to criminalise sanctuary jurisdictions and cut off their funds. Several cities have simply ignored his action.

The Rapid Transition Alliance (RTA), a global initiative which aims to learn from rapid change to address urgent environmental problems, thinks there is mounting urgency, which will result in rapid change for the better for many of the world’s migrants.

It acknowledges that “the real challenge is how to look after the huge numbers of lone young people struggling as migrants without family or community support. Between 2014 and 2018, around 60,000 minors arrived alone in Italy by sea, 90% of whom were between the ages of 15 and 17,” according to a recent report.

But it also instances the proposal to introduce a cross-border tax on financial speculation (the so-called Tobin Tax) as a way of helping to support migrants and refugees and to help to meet the costs associated with relocation.

The Alliance is upbeat. It says: “Despite high levels of hostility in the global North, exaggeration of the problem, and the irony that many wealthy countries are disproportionately responsible for many of the push factors driving human displacement, movement mostly happens within and between poorer countries.

“Where flows do occur from the global South to the North, it is often to where it is needed, and people are generally good at integrating and adapting.”

Others have been more sceptical about the world’s chances of preventing a climate-driven migrant catastrophe. As recently as 2015 the late British peer Lord Ashdown told the BBC: “The numbers we now have of refugees fleeing battle zones are going to be diminished into almost nothing when we see the mass movement of populations caused by global warming.”

Lord Ashdown, a former marine and diplomat, known popularly as Paddy, told the Climate News Network: “I raised the issue of climate refugees then because I’ve been trying for a very long time to get the international community to take some notice of them . . . I raised it to make the problem more obvious – though I do not know why politicians continue to be so blind to it.”

Paddy Ashdown died in December 2018, enough time to see himself proved right. Three years earlier he had said: “The Syrian crisis is simply a dress rehearsal for an immense climate-fuelled disaster, which I think will begin to be felt within the next decade, perhaps within five or six years from now.” − Climate News Network