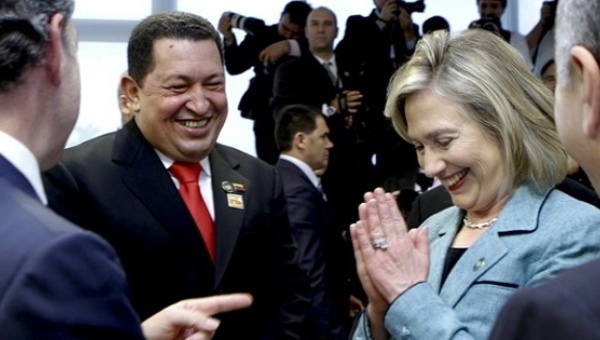 As secretary of state, Hillary Clinton led a team committed to delegitimizing the politics of the late Hugo Chavez and the Bolivarian Revolution.

While Hillary Clinton publicly welcomed improved relations with Venezuela as secretary of state, she privately ridiculed the country and continued to support destabilization efforts, revealed her emails leaked by WikiLeaks.

In 2010, Clinton asked Arturo Valenzuela, then assistant secretary of state for Western Hemisphere Affairs, how “to rein in Chavez.” Valenzuela responded that, “We need to carefully consider the consequences of publicly confronting him but ought to look at opportunities for others in the region to help.”

His answer was in line with the U.S. embassy strategy in 2006, also revealed in WikiLeaks intelligence cables: “Creative U.S. outreach to Chavez’ regional partners will drive a wedge between him and them,” said the confidential cable from the embassy. “By refusing to take each of Chavez’s outbursts seriously, we frustrate him even more, paving the way for additional Bolivarian miscalculations. We also allow room for other international actors to respond.”

Spain was among the countries willing to help the U.S. in its subversive foreign relations strategy. Former Secretary of State Madeleine Albright passed on a message from the administration of conservative Prime Minister Mariano Rajoy in 2012 expressing intentions “to re-orient Spanish foreign policy so that it can work with the U.S. in Latin America, especially on Venezuela and Cuba … As a transition in Cuba and something significant in Venezuela (and possibly the Andes) loom, a stronger working relationship between the U.S. and Spain could be very helpful.”

When keeping an eye on regional meetings, Clinton was especially concerned with Venezuela. Responding to a United Nations statement against the coup in Honduras in 2009—that she supported—Clinton shifted the attention to Venezuela: “Ok—but have they ever condemned Venezuela for denying press freedom?” she wrote to Deputy Chief of Staff Jake Sullivan.

He responded “I highly doubt it. And that is just the tip of the iceberg,” to which Clinton wrote, “Ah, the proverbial iceberg.”

Clinton was cautious not to respond to all of Hugo Chavez’s “antics,” but her staff insisted that Venezuelan politics were a threat to U.S. interests.

An email advising how to spend USAID funds strongly suggested refraining from backing leftist states like Venezuela, Ecuador, Nicaragua and Cuba because the money “could undermine real democratic development to hand over ‘ownership’ to populist centralizers.”

Clinton should use language like “‘local ownership’ in a nuanced way” to avoid having her words “used against her by demagogues and kleptocrats,” said the email. Any funds channeled into such unreliable states, it added, must be accompanied by “(h)uman behavioral changes.”

International aid to Venezuela was siphoned off, but broadcasts to counter local “propaganda” were amplified.

The Broadcasting Board of Governors—which runs the Marti stations, Voice of America, Radio Free Europe/Radio Liberty, Radio Free Asia and the Middle East Broadcasting Networks—requested more funding in a 2010 email forwarded to Clinton to “combat the public diplomacy efforts of America’s ‘enemies,’ which he (chairman Walter Isaacson) identifies as Iran, Venezuela, Russia, and China.”

The BBG, with a US$700 million annual budget—now increased to over US$750 million—was “facing increased competition from other governments’ forays into international broadcasting … including Venezuela’s teleSUR.”

A month later, when the board was facing cuts, Cuban-born Florida Senator Ileana Ros-Lehtinen suggested focusing resources on high-priority countries like Cuba, Venezuela and Ecuador.

Another leaked email from Stratfor described the BBG as “responsible for the radio and TV aggressions against Cuba,” which received its own category of state funding of nearly US$40 million. The board separated from State Department control in 1999, officially becoming an independent agency. “Congress agreed that credibility of U.S. international broadcasting was crucial to its effectiveness as a public diplomacy tool,” according to Congress’s 2008 budget on foreign operations.

While giving the cold shoulder to Venezuela, Clinton was cozy with Latin American players that opposed the country’s leftist politics.

Her counselor and chief of staff, Cheryl Mills, forwarded her a recommendation for Mari Carmen Aponte to be appointed as U.S. ambassador to El Salvador. Aponte, noted the email, “has consistently fought Cuba and Venezuela’s efforts to gain influence in Central America and as a result of her negotiating skills, the U.S. and El Salvador will open a new, jointly-funded, electronic monitoring center that will be an invaluable tool in fighting transnational crime.”

She won the appointment and later became assistant secretary of state for Western Hemisphere Affairs.

Clinton also drew fire for saying, “We’re winning!” when the Venezuelan opposition won a majority of seats in parliament in 2015 and for serving as secretary of state while the National Security Administration regularly spied on Venezuela.