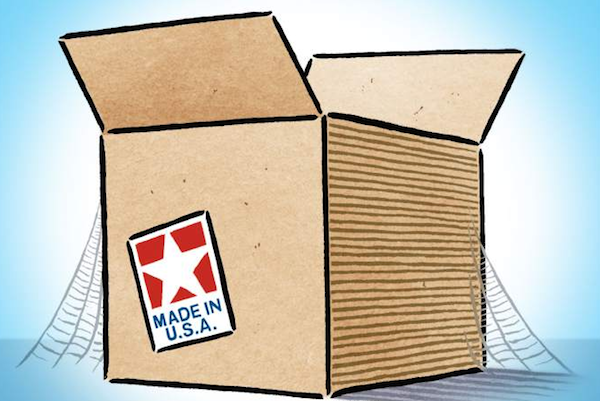 This artwork by M. Ryder relates to U.S. manufacturing and world markets.

When The Press Democrat published an editorial from the Washington Post (“A chance to speed up trade deals,” Nov. 8), most readers probably had not heard of the Trans-Pacific Partnership, even though negotiations for this trade agreement began in 2005.

Since the editorial recommended bipartisan cooperation to grant fast-track authority to the president to negotiate the Trans-Pacific Partnership, a trade agreement with 11 other countries, the paper apparently endorses the treaty and giving the president carte blanche to negotiate without congressional input or public discussion.

Although representatives of corporate America are participating in the process, members of Congress are not directly involved. If they grant fast-track authority to the president, they will have to vote the treaty up or down in 90 days, without any amendments.

Since representatives of public health, labor or environmental organizations have not been invited to participate, who is looking out for consumer safety, worker rights or the environment, critical components of a balanced trade agreement?

Though fast track has been used before, it raises constitutional issues and arouses suspicion about the proponents’ priorities and secret provisions of the pact. This process does not meet the minimal standards of transparency and accountability. Fair trade agreements do not have to be fast tracked.

As with NAFTA and the World Trade Organization, the Trans-Pacific Partnership would favor the free flow of capital, remove restrictions on trade and investment, eliminate subsidies, protect intellectual property rights and promote privatization of public services. It is more about protecting investments than about trade.

Although NAFTA was supposed to improve our balance of payments, create good paying jobs and reduce immigration, it did just the opposite. When American companies moved production to countries with lower wages, fewer regulations and lower taxes, millions of decent jobs disappeared, and American workers found themselves in a race to the bottom. In order to keep their jobs, they accepted lower wages and benefits, wages stagnated and income inequality soared.

Based on leaks, the Trans-Pacific Partnership apparently would include investor-state dispute settlement, whereby foreign investors can challenge local regulations before an international tribunal and receive damages if they can prove that their profits have been harmed by these laws. Threatening to override “buy local” policies or regulations protecting consumers, workers or the environment, this arrangement weakens local authorities and courts. It does not, however, empower local governments to hold corporations accountable. Under this system, local efforts to protect the coast, conserve wetlands, prohibit fracking, ban GMOs, regulate land use, restrict use of water, set minimum wages or sustain a green power utility could be reversed for harming investors’ profits under this treaty. It might also overturn restrictions on the use of designations for locally produced wine or cheese.

If the foregoing is not reason enough to reconsider fast-tracking this partnership, the single most important challenge facing us today, climate change, certainly is. While globalization and increased trade have fueled economic development, the increase in manufacturing has also increased carbon emissions and accelerated warming.

Although China is now the largest polluter, American companies own factories in China or hire Chinese subcontractors to produce products for the global market As consumers, we also share responsibility for the emissions from the manufacture and transport of these imports, and the sweatshops in which they are manufactured.

In recognition of this shared responsibility for global emissions, now and in the past, and aware that some of the poorest nations will be devastated by global warming, President Barack Obama has pledged a donation of $3 billion to help them.

Although the U.S. and China have just signed an agreement to reduce carbon emissions by 2030, the increased economic activity from the Trans-Pacific Partnership could thwart these worthy goals, abetted by a Republican-controlled Congress. That not only raises questions about the Trans-Pacific Partnership but also about whether the current trade system is sustainable.

Tony White is a retired history professor and a member of the North Bay Jobs with Justice who lives in Santa Rosa.