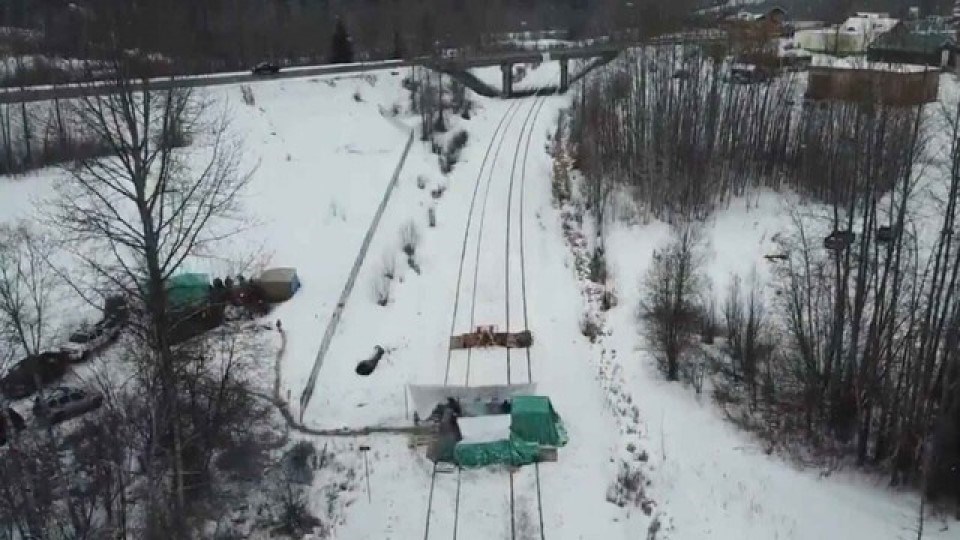 BREAKING: A private corporate prosecution targeting Indigenous activists is taking root in Canada — based on the same @Chevron model used to detain me in the U.S. for 2 years. The oil industry attack campaign is spreading.

CN Rail has won the right to privately pursue criminal charges against three people who participated in a 2020 rail blockade in northern B.C., despite the fact that provincial prosecutors declined to get involved.

The ruling cements the B.C. Supreme Court’s ability to enforce court injunctions, with or without the participation of Crown prosecutors, who unsuccessfully fought the decision.

A group of people, including three Gitxsan hereditary chiefs, were arrested at a blockade on a CN Rail line in New Hazelton, B.C. on Feb. 24, 2020.

An injunction against the blockade had been issued two weeks prior amid nationwide protests in solidarity with Wet’suwet’en hereditary chiefs fighting against the Coastal Gaslink Pipeline.

The BC Prosecution Service, which typically has the final say on who gets charged with criminal offences in the province, declined an invitation of the court to press charges.

Crown prosecutors said they could not prove nine of the protesters were aware of the injunction when they were arrested. Three others, however, were captured on video having the injunction read to them.

Provincial prosecutors tried to argue it was “not in the public interest” that those three protesters be criminally prosecuted on the basis that they were non-violent, mostly cooperative and did not return to block the tracks after their arrest.

In a BC Supreme Court ruling earlier this month, Justice Ward Branch said the BC Prosecution Service is “not the sole arbiter of the public interest.”

“While the BCPS has expertise in assessing and pursuing criminal offences, the court undoubtedly has its own expertise in protecting the administration of justice and ensuring respect for the courts…” Branch ruled.

The BCPS tried to raise concerns about a private corporation, CN Rail, carrying out a criminal prosecution.

Justice Branch agreed that the situation “is not ideal,” but when Crown counsel declined to press charges “the court is effectively left to ‘make the best out of a bad situation.’”

Branch noted that “judicial contempt power has existed for as long as courts themselves,” later ruling “that the long term repute of the administration of justice is imperilled by the mass public disobedience of a court order.”

Criminal Vs. Civil Contempt Of Court

When dealing with people who breach court orders, the courts deal with offenders in two ways.

Civil contempt of court proceedings are used for issues between two parties with the primary purpose being to secure compliance with the court order.

A criminal contempt case transcends the interests of the parties, resulting in the public having an interest in ensuring the proper administration of justice. Punitive sentences are issued.

In the CN Rail blockade case, Justice Branch ruled that CN Rail can launch its own criminal prosecution of the three protesters who were allegedly knowledgeable of the injunction.

The other nine protesters would have to be dealt with in a civil contempt case, with the judge accepting the Crown’s explanation that a conviction is unlikely.

Justice Ward’s ruling on the New Hazelton blockade was guided primarily by a similar BC Supreme Court decision months prior.

A blockade at the entrance to the Vancouver Port on Feb. 24, 2020 — the same day at the New Hazelton rail blockade arrests — was cleared by police. An injunction preventing the blockade has been issued weeks prior and six people were arrested.

The BC Prosecution Service again declined to press criminal charges because it was not “in the public interest that prosecutions proceed.” A judge would then grant the Vancouver Port Authority the right to pursue criminal charges privately, which the BCPS opposed.

The six arrestees in that case pleaded guilty after the Port Authority won the right to press criminal charges and were sentenced to 12 months probation and 25 hours of community service/$500 fine.

The Port Authority decision was also relied upon by a judge dealing with the injunction contempt case for the ongoing Fairy Creek blockades on Vancouver Island. But in that case, provincial prosecutors deemed it in the public interest to press criminal charges against hundreds of protesters.

The New Hazelton and Vancouver Port Authority decisions erode the discretion the BCPS and BC Attorney General previously had in dealing acts of civil disobedience that violate injunctions, opening the door to more private criminal prosecutions in the future.

At this time it is not known if CN Rail will proceed with a criminal prosecution of the three eligible New Hazelton arrestees. The company declined comment when contacted by Castanet.

The New Hazelton arrestee identities are not revealed in the court decision, but the judge said he expects the BCPS to make them available to CN Rail and the courts.