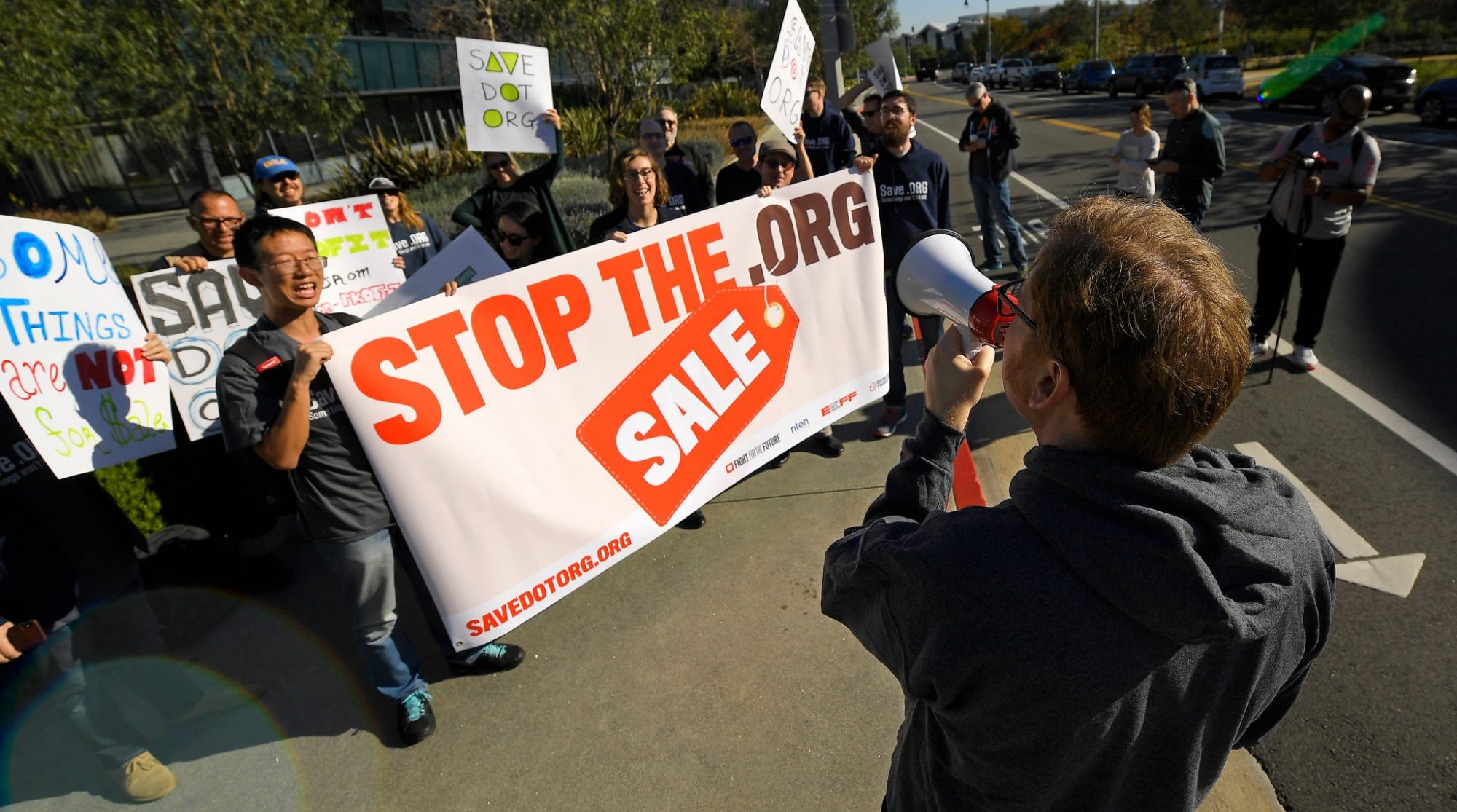 Above photo: Protesters outside the Los Angeles headquarters of the regulatory body for domain names, the Internet Corporation for Assigned Names and Numbers, in January. Mark J. Terrill/Associated Press.

The co-op blocked the sale of the .org domain to private equity.

How .org was almost sold to private equity

Around 5% of all websites use the .org domain, with the most popular being Wikipedia. These websites represent around 6% of the top 1000 websites and 7% of the top 100 000 domains. The domain itself has been controlled by ICANN (The Internet Corporation for Assigned Names and Numbers), which is part of the non-profit Internet Society. In 2019 a private equity firm, Ethos capital, approached ICANN with an offer of buying the .org registrar for $1.6 billion.

As the deal seemed likely to pass, the opposition to the deal mobilised a massive campaign to stop it. ICANN received 3,252 comments, with only 6 in favour of the deal. Perhaps the most commonly cited criticism included the removal of the price cap. The price for .org domains had been capped at 9.93$/year since 2013, although registrants were allowed to freely sell them. Ethos would have got rid of the price cap, which raised concerns about a transfer of wealth from a large number of non-profits around the world to a single private equity firm. Concerns were also raised about censorship and selling off data.

The campaigners proposed and set up an alternative – Cooperative Corporation of .ORG Registrants, democratically governed and owned by the registrants. It includes numerous heavyweights of the industry in its board – such as Katherine Maher, the head of Wikimedia (the parent organisation of Wikipedia) and Michael Roberts, the founding president of ICANN. One of the board members, William Woodcock has explained the structure:

– Every .org registrant has one vote when electing the board of directors. Whether it is Wikipedia or a local children’s football club, they both have an equal say.

– The surplus is distributed to the members proportionally. If the .org domain remains at 9.93$, and the CCOR makes a 4$ surplus as a result, someone with one .org domain gets 4$ back at the end of the year, while someone with 10 .org domains will get 40$.

– A bad actor could try to game the system by pretending to be multiple organisations, but it would be pointless. Even if elected to the board, they wouldn’t have any rights that non-board-members don’t have. The members’ rights to their share of the surplus are guaranteed under law, so the bad actor couldn’t, for instance, vote to pay themselves.

In May, the campaign succeeded in blocking the sale. It now remains to be seen whether the next step is taken to implement the cooperative ownership model proposed by the campaigners. This would lead to an explosive expansion of the platform cooperative movement, suddenly having 5% of all websites as part of it. The board elections of the cooperatives could also be an unprecedented exercise of global democracy, where millions of organisations around the world would use their voting rights to democratically shape the course of the future of internet. It might signal a move away from the trend of the internet being increasingly dominated by largely unaccountable, monopolistic corporations seeking to maximise their profits.