CO2 Just Hit An All-Time Record. But That’s Not The Worst Of It.

The Scripps Institution of Oceanography and the National Oceanic and Atmospheric Administration (NOAA) announced Tuesday that the average carbon dioxide concentration in the atmosphere during May rounded to 414.8 parts per million, or ppm — the highest monthly number on record and the peak of 2019. While Earth’s CO2 trend has been skyrocketing overall — compared to both geologic and historic levels — each year the potent greenhouse gas wavers down during the warm growing season, when flourishing trees and plants in the Northern Hemisphere temporarily soak up CO2 from the air (this ever-rising, though saw-like line is called the Keeling Curve).

But 414.8 ppm, while the highest monthly CO2 level in recorded history, is not the only number that’s critical to appreciate. The other is 3.5 ppm. That, noted Scripps, is the leap in CO2 ppm since last May. It’s the second highest year-to-year jump on record, and smashes average CO2 increases from earlier decades. After the Scripps monitoring station atop Hawaii’s towering Mauna Loa went online in 1959, CO2 rose around just 0.7 ppm per year in the early decades of operation. Then, in the 1990s, the rate increased to 1.5 ppm per year. The last decade has averaged 2.2 ppm.

Yet, in the last year, it was a 3.5 ppm gain. Concentrations of the planet’s most influential greenhouse gas are accelerating.

“It’s extremely alarming to see atmospheric CO2 continuing to increase relentlessly year after year when all scenarios that lead to a stable climate require that it go down,” said Sarah Green, an environmental chemist at Michigan Technological University. 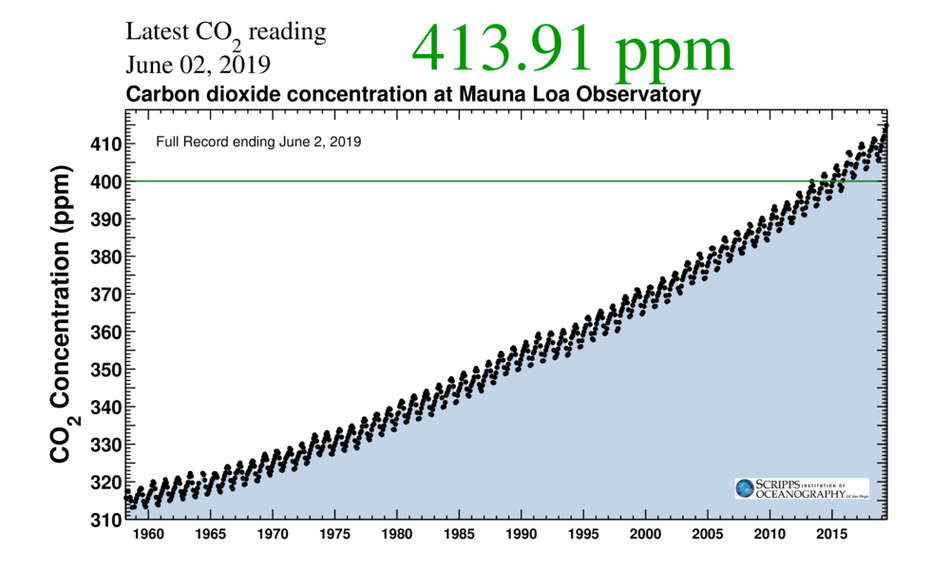 The saw-like  line of the rising CO2 curve.
IMAGE: SCRIPPS INSTITUTION OF OCEANOGRAPHY

“The further we go into the uncharted climate territory of unprecedented CO2 levels, the more likely we are to encounter surprises,” added Green, referencing the extreme weather and climate disruptions wrought by such warming. “We are heading toward the part of the climate map labeled ‘here there be dragons’ and rather than turning around, or even slowing down, we are running faster.”

On Earth, climate scientists globally are well aware that the climate has naturally changed before, as CO2 levels have fluctuated over hundreds of thousands of years. But the current rate of change has no precedent, in at least some 800,000 to a million years.

“When I think of the Keeling curve, I see it as the most important confirmation that the rate of the rise in CO2 (or the pace of CO2 increase) is like nothing we have ever seen before and probably like nothing the planet has ever seen before, certainly in the last million years and possibly ever,” said Kris Karnauskas, an associate professor in the Department of Atmospheric and Oceanic Sciences at the University of Colorado Boulder. 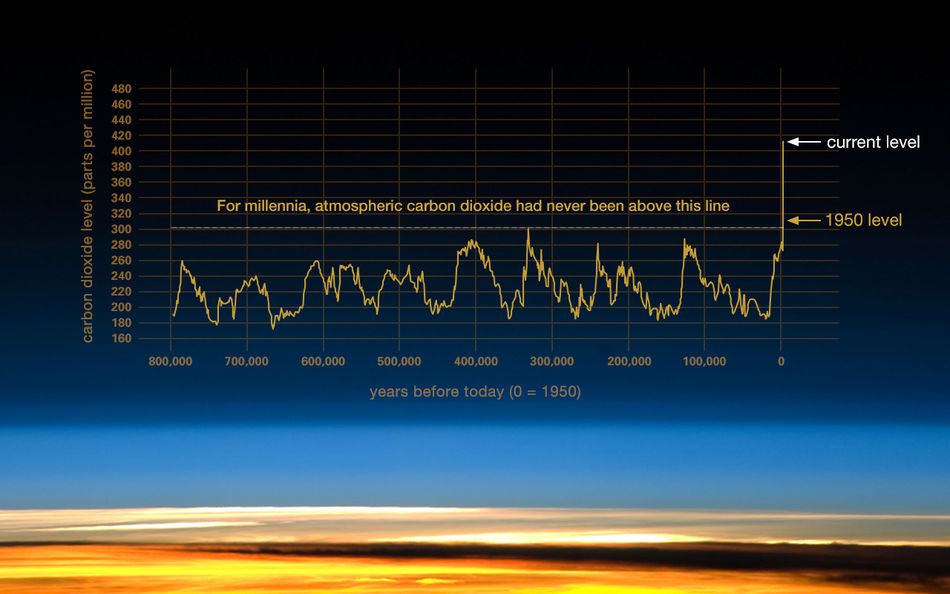 Today’s CO2 measurements, like the Scripps’ measurements taken atop Mauna Loa and other stations around the globe, are direct, incontrovertible proof that the planet is experiencing profound atmospheric changes.

“These are measurements of the real atmosphere,” Pieter Tans, a senior scientist with NOAA’s Global Monitoring Division, said in a statement. “They do not depend on any models, but they help us verify climate model projections, which if anything, have underestimated the rapid pace of climate change being observed.”

“We are running faster”

Although these CO2 numbers are stark, they’re even more striking when put into context with observable changes around the rest of the world. In real time, scientists are seeing unprecedented disappearances of Arctic ice, vanishing mountain glaciers, a surge of large, destructive wildfires, and continually warming seas.

“We still need to remember that the story isn’t built on a single number,” emphasized Green. “The full story of the climate crisis, which is even more alarming, is built from many, many data points on global emissions, ocean heat, Arctic warming, deforestation, and many other metrics.”

Halting an unprecedented rise in CO2 will require unprecedented, transformative societal efforts, specifically slashing the use of fossil fuels. Already, it’s almost certain that the globe will warm beyond 2 degrees Celcius (3.6 Fahrenheit) this century.

As Green, noted, there are regional efforts underway to “turn the tide of emissions,” like the growing number of U.S. states that have passed or introduced laws to completely end CO2 emissions by around the middle of the century.

Sea ice extent is currently a record low in the #Arctic Ocean-basin. Summertime melt is largely found in this area, whereas wintertime variability is confined to the outer marginal seas.

But, in the U.S., the current presidential administration is in robust and proud support of continued carbon dioxide emissions.

This won’t help society curb Earth’s warming to temperatures that would limit the worst consequences of climate change, noted Karnauskas.

“Every molecule of CO2 is not a molecule of freedom,” he said. “It is further tying our hands in terms of available options to solve this crisis in the future.”