This weekend across two states, a community of climate activists stopped 10,000 tons of coal in its tracks in three successive train blockades. This is the next step in a campaign that started in August to shut down the Merrimack Generating Station in Bow, New Hampshire – the last large coal-fired power plant in New England without a shut-down date. There is no justification for burning coal in 2019: it’s far too late for that. And taking responsibility in 2019 means taking action.

There was fresh snow on the ground when the train, which was 80 cars long, rolled into Worcester, MA at 9:30 AM on Saturday, December 7th. It sat there almost a full day before it started rolling north again at 7:30 PM. Before the train had moved more than a couple miles, it was stopped by a small but determined group of activists who had been standing in temperatures well below freezing all day. A rotation of students from Clark Climate Justice (Clark University), with support from members of 350 Central Massachusetts and the Central MA climate disobedience praxis group, had been keeping themselves warm enough and ready to act throughout the many hours of waiting.

In the middle of several miles of woods in the town of West Boylston, the train began slowing down after a call to the emergency phone number to the railway dispatch. But it did not stop in time, and sprinting along the tracks four brave organizers caught up to it and stood in front of the engines in the glaring headlights after it came to a halt.

Supporters soon arrived at the remote blockade site, and it wasn’t too long before the West Boylston police arrived, too. The local police were not interested in arresting four or five folks in the middle of the woods in the snow and biting cold, and so they left after telling the blockaders that they were on railroad property and that the railroad police would be there in two hours to deal with them. So the cold and waiting continued. Blockaders walked back to the little encampment to fetch their warm gear (while some stayed in front of the train, of course), bringing it to the front of the train where they hunkered down together.

Shortly after 10pm Officer Mitchell of the Boston & Maine Railroad Police arrived and attempted to convince the activists to leave voluntarily. After another hour and a half of negotiations, bringing the total blockade time to over 3 1/2 hours, the four remaining activists left of their own accord, having been issued a warning.

At 11:40 PM, the coal continued on the Worcester Main Line toward the town of Ayer, Massachusetts. Ayer is home to a large rail yard and a junction with the freight and MBTA commuter rail line owned by Pan Am Railways.

And lo and behold! Another blockade sprang up!

This time activists from the metrowest climate disobedience praxis group, the Metrowest node of 350Mass, and members of the Sugar Shack Alliance from the Pioneer Valley showed up in force, and a big group got themselves in front of that train. From 3:30 AM until nearly 5 AM on Sunday, December 8th they kept the coal at bay on a short segment of fright track between the Ayer yard and the MBTA main line. This time with signs! 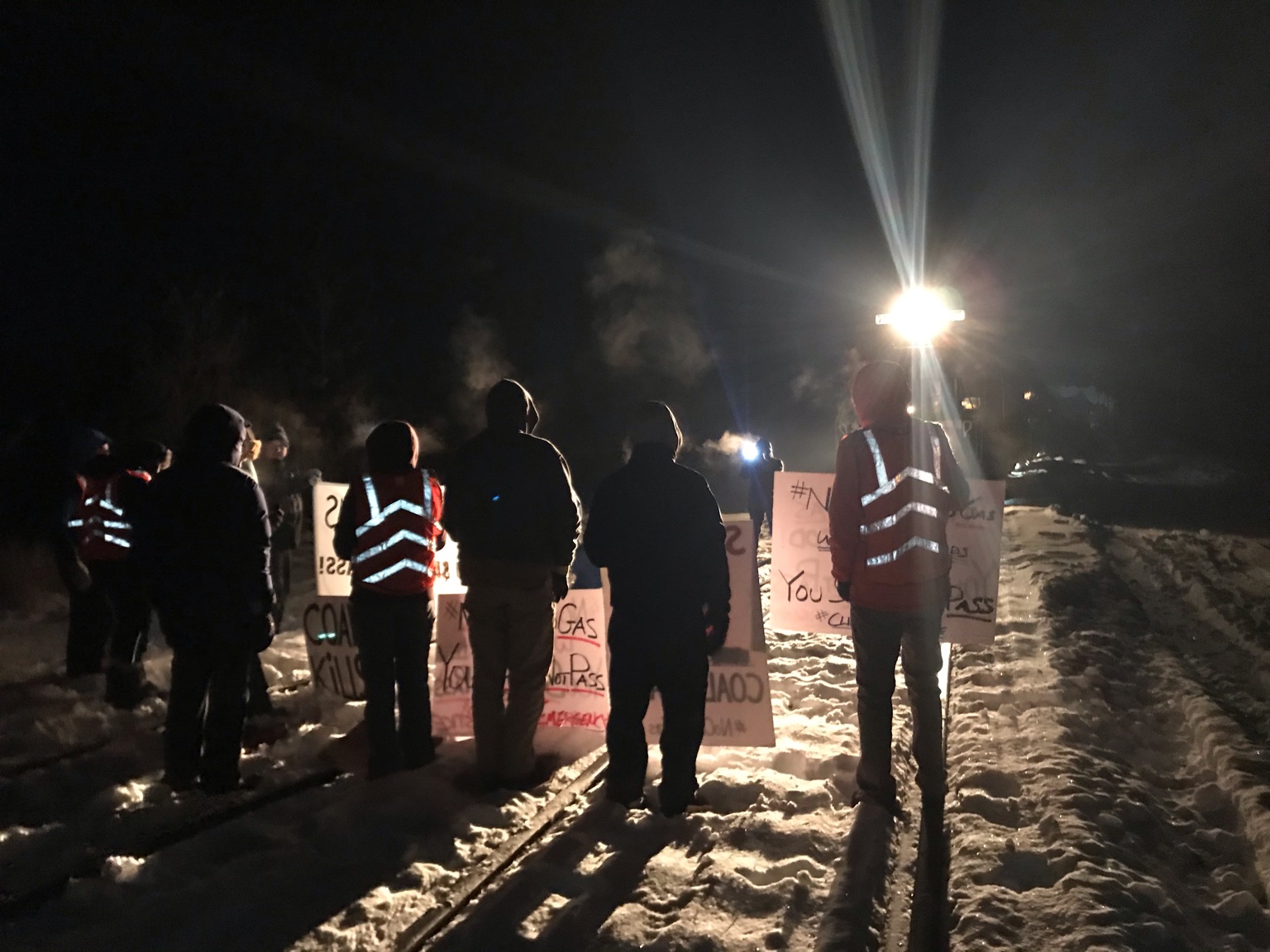 Ayer police arrived on the scene quickly, and the blockade continued while officers from neighboring towns trickled in until there were enough squad cars and handcuffs on site. Blockaders were arrested one by one and put into waiting police vehicles, and the final two on the tracks extended their hands toward the rumbling train engine to embody Barbara Deming’s “Two Hands of Nonviolence”: one hand held up to say STOP! and the other extended in an invitation to transformation.

In total 12 blockaders were arrested and taken to the nearby Ayer police station. And around 5 AM the train pulled out onto the Pan Am Main Line headed toward North Chelmsford and New Hampshire. 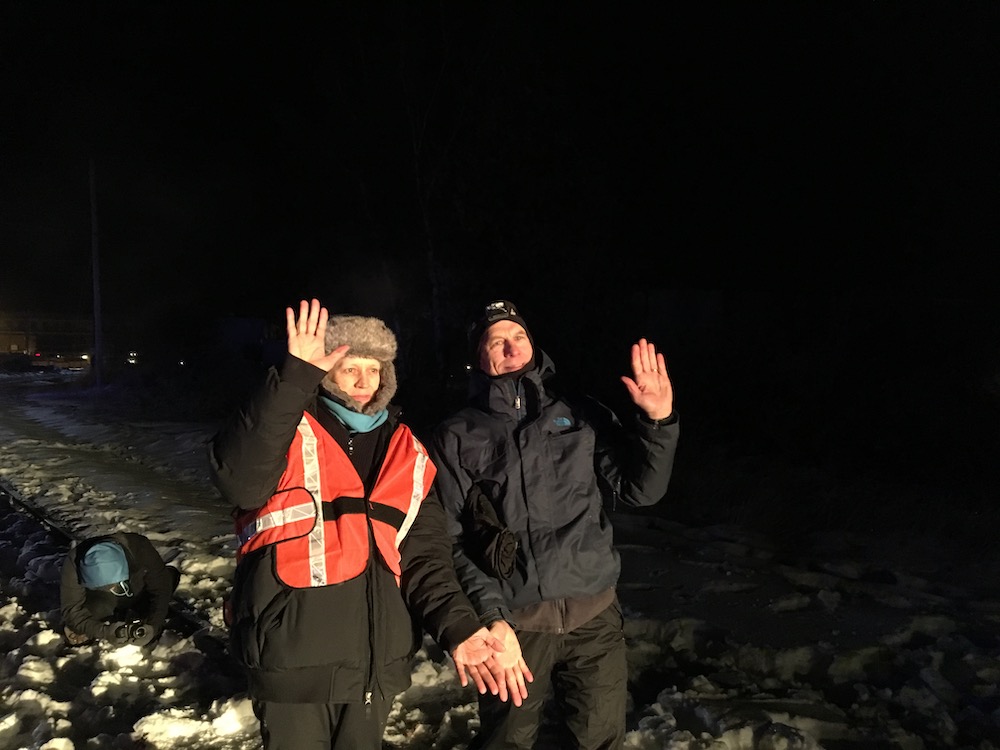 As the train continued northwards towards Bow, the sun rose on another cloudless winter day with the temperature at dawn at 0°F, a third group was prepared to take action in the town of Hooksett, New Hampshire, just a few miles south of the power plant in Bow.

At 10:30am, it was time. The train was again stopped about a mile south of their location – before it was in view of the blockade site. When they got the signal, a group of blockaders made their way into the center of the railroad bridge that crosses the Merrimack River at Hooksett. This group included two climbers who scaled the metal trusses, hung a “No Coal No Gas” banner across the span, and safely clipped their harnesses to the bridge. 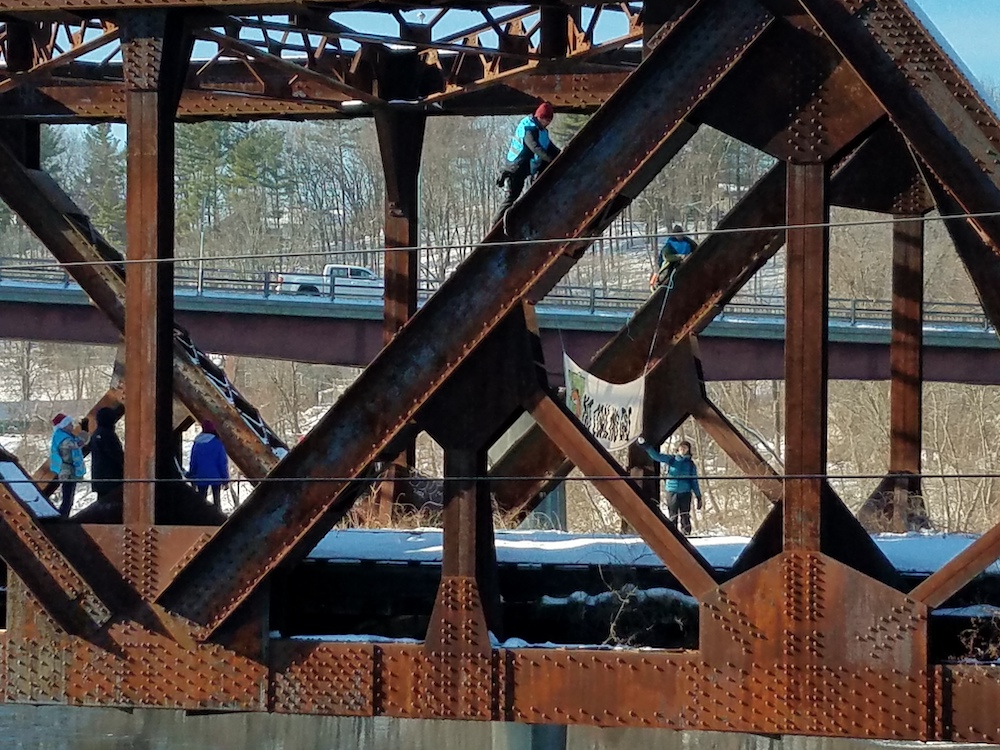 A large group of supporters, fluctuating between 20 and 25, gathered on the adjacent public pedestrian bridge, and the groups sang, chanted, and sent love back and forth across the water. Their presence and witness bolstered those on the tracks and was a solace to those scaled the bridge.

Police arrived quickly – while the two climbers were still maneuvering into position with the banner. Emma Schoenberg, of the Climate Disobedience Center, was immediately arrested as she walked out to engage the State Troopers as a police liaison in order to buy more time for the climbers. When she said she was going to return to the group and relay the dispersal order, one of the officers said “Grab her!” and she was locked in the back of a police cruiser for the next 2.5 hours. After two hours of mobilizing resources, police removed 9 pedestrian blockaders on the railroad bridge, leaving the two climbers in place. These 10 blockaders were each issued a court summons for trespassing, and were not booked by the police. By now, our network was getting to know Officer Mitchell, the sole B&M Railroad Police officer in the region, who responded to the blockades in Worcester/West Boylston and Ayer and greeted them heartily upon their removal from the bridge.

The aerial blockaders remained high up on the metal superstructure of the bridge over the middle of the icy Merrimack River, with no obvious way to extract them. After several more hours rescue climbers and rescue boats from the fire department arrived on the scene. 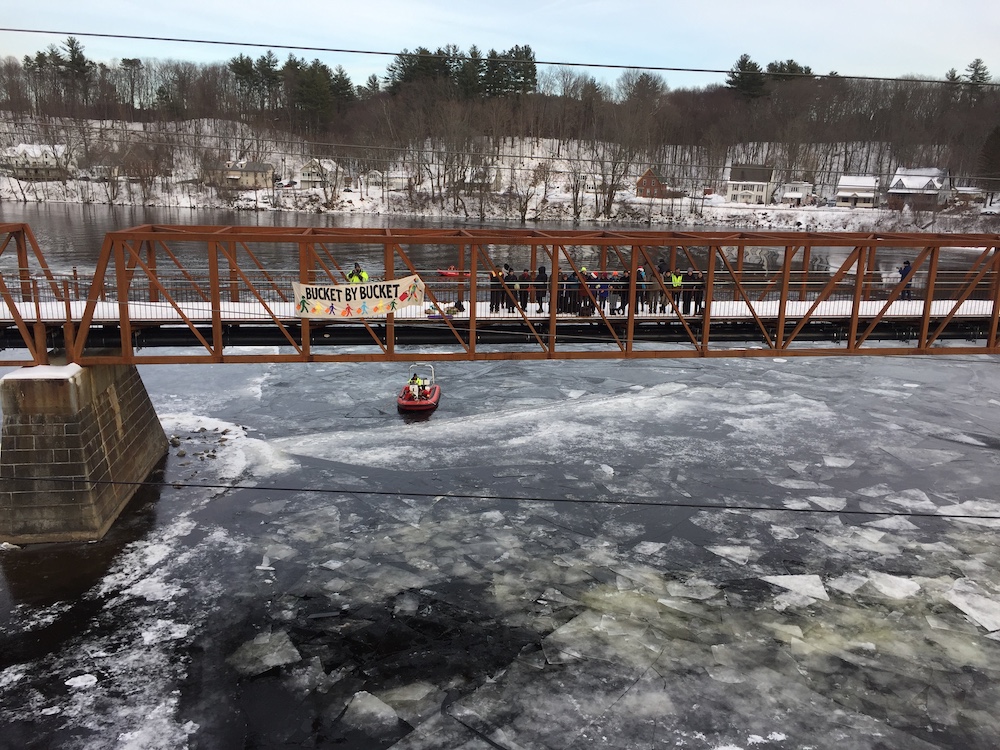 The aerial blockaders were given life jackets, and the firefighters scaled the trusses, secured the activist climbers, and brought them down one at a time. Both were charged with trespass and resisting arrest, and released onsite. Their determination and grit held the train bridge for an additional four hours. The Hooksett blockaders halted the coal train for a total of six hours, until 4:30pm.

The coal made it to the power plant this time, but this movement is growing in sophistication and power. In this first blockade, the coal was stopped for 11 hours. 24 people were arrested or issued court summons in 2 states. All it takes is a few people to bring the fossil fuel industry to a halt. There are a lot more people out there who are ready for climate justice to become a reality, and people across New England are gearing up.