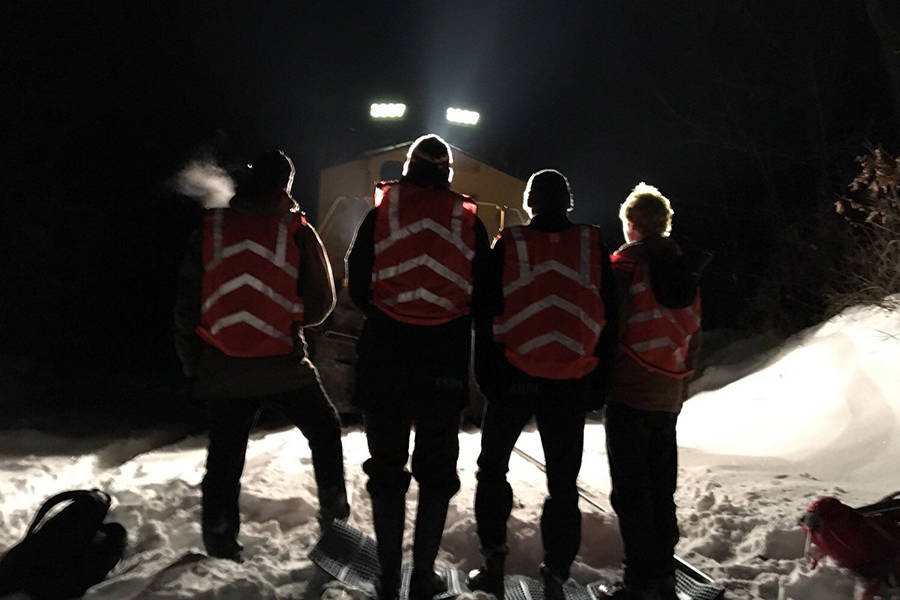 Above Photo: Protesters have blocked coal trains headed for one of New England’s last remaining coal-fired plants five times in the span of a month, including this protest in early December 2019 and another this week on Jan. 2-3, 2020. Credit: 350 New Hampshire Action

Climate activists halted a coal train bound for one of New England’s last large coal-fired power plants by building a barricade on the tracks and sitting on it for about eight hours this week. The delay was temporary, but it was the fifth time activists had stopped a coal train in the region in less than a month.

The protest is part of an ongoing effort to eliminate coal-fired power production in New England. It also draws attention to what activists say is a costly and unnecessary subsidy for coal-burning power plants that consumers ultimately pay.

The train the protesters stopped Thursday night near Harvard, Massachusetts, was transporting more than 10,000 tons of West Virginia coal to the Merrimack Generation Station in Bow, New Hampshire, according to the Climate Disobedience Center, an environmental organization that helped organize the demonstration.

“We are all witnessing the climate emergency, and this plant needs to shut down,” said Sabine von Mering, a member of 350 Mass Action who was one of dozens of activists at the protest site. Four people were arrested there. Dozens of others had been arrested at earlier protests targeting the same plant and its coal trains.

Granite Shore Power, the company that owns the 482 MW coal- and kerosene-fired Merrimack Generation Station did not respond to a request for comment, nor did CSX, the rail company whose coal train was blocked by the demonstration. In the first 10 months of 2019, the power plant burned 103,000 tons of coal, according to the U.S. Energy Information Administration.

The trains were only briefly delayed by each protest, and the delays likely had little if any impact on the power plant’s operations, but the protests have started drawing attention to the Merrimack plant and the money its owners are being paid.

New England Coal and the Merrimack

Coal, a particularly dirty form of fuel, makes up only 1 percent of electricity generated in New England today, according to data from ISO New England, an independent company that operates the region’s electricity grid. The states the grid serves belong to the Regional Greenhouse Gas Initiative (RGGI), an 11-year-old carbon cap-and-trade system that has helped reduce their electric power sector emissions by nearly half.

The Merrimack power plant does not provide continuous baseload power. Its coal boilers are only fired during periods of peak demand.

In 2017 the plant ran at only approximately 5 percent of its total capacity, or the equivalent of running at full capacity for roughly 20 days during the entire year, according to an analysis of federal data by energy consultancy M.J. Bradley & Associates. It is one of only two large coal plants remaining in New England. The other, in Bridgeport, Connecticut, is scheduled to shut down in 2021.

Climate activists say that despite its limited use, emissions from the Merrimack plant are still significant and the plant remains in operation because of what they say is an unfair subsidy funded by the region’s ratepayers.

Millions of Dollars to Keep a Coal Plant Ready

Granite Shore, a joint venture of Castleton Commodities International LLC and Atlas Holdings, a private equity company, which purchased the plant in 2018, will receive $189 million from 2018 to 2023 in “forward capacity payments” from ISO-New England, according to an analysis of ISO data by the NH Business Review. In exchange, the company commits to keeping the power plant open and ready to provide electricity during periods of peak demand.

“These forward capacity payments, which act as a subsidy to keep the coal in place, is money that is coming out of ratepayers pockets in New England that could be used instead to transition the grid into the kind of technology that we need for the future,” said Marla Marcum, director of the Climate Disobedience Center. “Instead, it’s being used to keep in place a technology of the past that is harmful to the communities where the coal is mined. It’s harmful to the communities where it’s burned, and it’s harmful in a global sense due to the emission related to climate change.”

ISO-New England spokesperson Matthew Kakley said he was not in a position to confirm or dispute the $189 million figure but said the payments to power plants are not subsidies.

“These payments are the result of an open auction in which resources of all fuel-types and technologies compete to provide the capacity needed to run the power system reliably,” Kakley  said. “Resources clear this auction based on their ability to provide the service at the lowest cost.”

“Those tens of millions of dollars a year could be used to transition the grid to the future that we need,” she said.

ISO-New England will hold its next forward capacity auction in February to ensure it has the resources it needs to meet future energy demands.