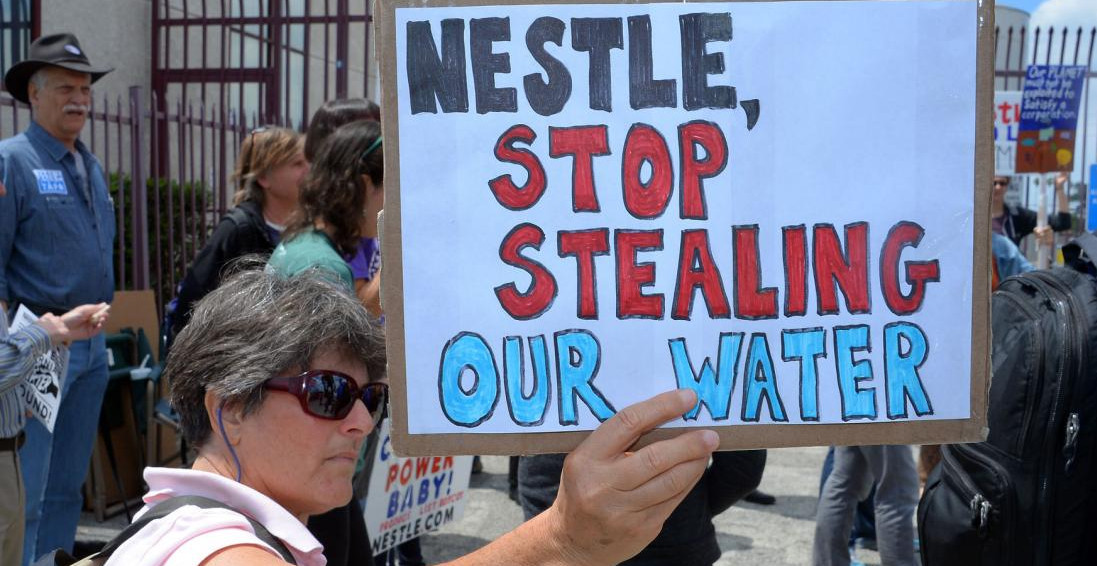 Above photo: From Waking Times Media.

Mecosta, MI – Great Lakes water protector groups including U.S., Canadian, and Indigenous representatives united at the Water Is Life: Strengthening the Great Lakes Commons conference in Flint on September 29 and 30, 2017.

Sixteen Water Protection organizations representing urban and rural communities from Michigan and Ontario along with local residents, Indigenous representatives and activists attended this unprecedented international summit on water justice around the Great Lakes. Attendees pledged to challenge Nestlé and end the water crises in Flint, Detroit and Indigenous nations.

Maude Barlow of Council of Canadians presented the keynote speech on Friday evening to a crowd of more than 200 people at Woodside Church in Flint.

“The summit this weekend was a powerful moment for water justice organizations, Great Lakes residents and Indigenous representatives. We came together to challenge the issues that our governments are failing to address. We renewed our commitment and outlined concrete steps to secure the human right to water and bring about water and social justice for all communities around the Great Lakes,” Maude Barlow said.

People shared stories of violations of the human right to water – that echoed a similar message – water in communities around the Great Lakes is being put at risk by privatization and commodification.

A common discussion theme raised during the two-day summit was the outrage people feel at allowing Nestlé to take water (essentially free) for private profit while Flint, Detroit, and Indigenous communities cannot rely on public systems/government for clean water and many are shut off altogether.

Sylvia Plain, from Aamjiwnaang First Nations, near Sarnia, expressed her concern that Indigenous nations in both countries have kept their treaty promises yet are still waiting for American and Canadian governments to reciprocate.

Claire McClinton of Democracy Defense League of Flint, said at the Summit:

Michigan Citizens for Water Conservation members who attended the Summit were committed to connecting the dots between Nestlé’s push to privatize water by “taking” as much as possible while destroying the ecosystem of the Muskegon River Watershed, and the folks in Flint and Detroit who pay the highest prices for water in our country.

Listen to our interview with Peggy Case of Michigan Citizens for Water Conservation on Clearing the FOG:

Nestlé makes $millions while the local communities are losing their precious water and gaining little economic value for their communities. In both Canada and the U.S, Nestlé controls access to underground aquifers, takes water for fractions of a penny per gallon, and sells water marked up by 2000% in single-use plastic bottles which wind up as litter more often than they are recycled.

The pumping, packaging and distribution of bottled water is unsustainable for the environment. Bottled water undermines confidence in public tap water as governments neglect investment in public water infrastructure.

At the Summit conclusion, representatives of the sixteen water protection organizations, pledged to work together to protect water in their communities. Michigan Citizens for Water Conservation will call on Governor Snyder and our legislators to phase out permits to bottle water over the next ten years. We have also joined with other organizations of the forum to boycott all Nestlé products, and will defend the Osceola Township decision to say NO to the Nestlé booster station request, and encourage all to contribute to the legal defense fund set up to cover the bills for the frivolous lawsuit Nestlé filed against the township.

Support Evart – a small township is being sued by giant Nestlé because it denied Nestlé’s request for a permit to take more water. Donate to Evart here.