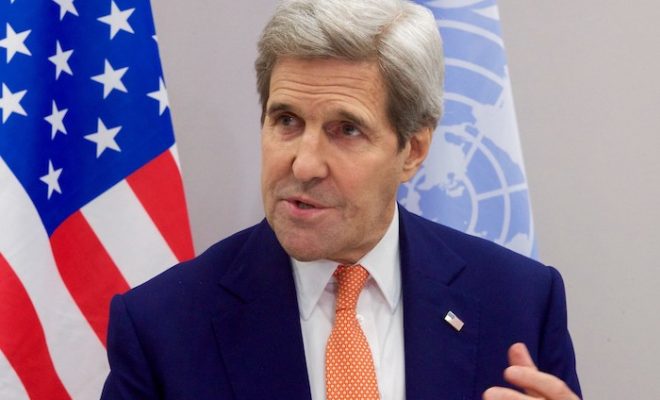 Above photo: John Kerry. US Dept. of State/Flickr.

NOTE: It is good to see the United States back in the Paris Climate Agreement and reengaging with other countries on this critical issue, but we can’t have any illusions that the US will push for an equitable and just climate future. The climate crisis is becoming another profit venture. We will have to continue to demand an eco-socialist Green New Deal that puts necessary sectors in public hands and uses a participatory process to put control in the hands of those who are the most impacted by the crisis.  – MF

“This is a significant day, a day that never had to happen,” Kerry said. “It’s so sad that our previous president, without any scientific basis or any legitimate economic rationale, decided to pull America out. It hurt us and it hurt the world.”

Now, he added, the U.S. is re-entering the landmark 2015 accord “with a lot of humility, for the agony of the last four years”.

The expression of “contrition” from the Biden administration is “balanced by a desire to resume the mantle of leadership at a time when almost every country is struggling to undertake the swift emissions cuts required to avert disastrous global heating of 1.5°C above the pre-industrial era, as outlined in the Paris deal,” The Guardian writes. “Kerry said that none of the world’s major emitters, including China, India, and the EU, are doing enough,” all of which raises the stakes for the negotiations during COP 26 in November.

“The meeting in Glasgow rises in its importance,” he said. “We are at this most critical moment where we have the capacity to define the decade of the 20s which will make or break us to get to net-zero carbon in 2050.”

That puts the onus on countries to “define in real terms their roadmap for the next 10 years, the next 30 years,” he added. “We are talking about a reality we haven’t been able to assemble in these meetings so far.”

While climate hawks were pleased at the Biden administration’s move, the reactions were necessarily brief and understated.

“It’s good to have the U.S. back in the Paris agreement, but sadly we have no time to celebrate,” said Laurence Tubiana, an architect of the Paris Agreement who now leads the European Climate Foundation. “The climate crisis is deepening, and this is the year we need all major polluters to step up and deliver stronger plans to deliver a safe, clean, and prosperous future for everyone.”

“The climate crisis is a race against time, and the U.S. is just reaching the starting line after years of inaction,” said Jean Su, energy justice director at the Center for Biological Diversity, one of nearly 200 environmental and humanitarian groups that are urging the U.S. to meet its responsibilities for climate action and international climate finance. “As the world’s largest historical polluter, the United States must take its fair share of robust climate action on both the domestic and global stage.”

In statements late last week, Biden and his senior officials appeared to agree.

“This is a global existential crisis,” the U.S. president told the Munich Security Conference Friday. “We can no longer delay or do the bare minimum to address climate change.”

“We have to show we are not just talking the talk but walking the walk,” added Todd Stern, the lead U.S. negotiator at the 2015 Paris conference. “Our capacity to be impactful will start at home. Everybody understands the United States has got to get a really revved-up effort.”

That will begin with the U.S. updating its voluntary Nationally Determined Contribution (NDC) under the Paris accord, as all countries are supposed to in advance of the Glasgow conference. In addition to the nearly 200 civil society groups cited by The Guardian, Greentech Media says U.S. states, cities, and businesses are pressing the new administration to commit to a 50% reduction in greenhouse gas emissions by 2030.

The new group, America Is All In, grew out of the coalition of state governors, tribal nations, cities, and environmental groups that pledged in 2017 to uphold their country’s Paris government against the Trump administration’s wanton hostility.

“For four years, [the groups] acted in place of the federal government,” said Climate Nexus Executive Director Jeff Nesbit, and “effectively held the line until this moment when a new administration entered office that took the climate crisis seriously.”

Now, “the new group aims to back Biden’s overarching targets with a ‘whole-of-society’ approach,” Greentech writes. “And with the support of the federal government now behind them once again, America Is All In is pushing the administration to pledge to cut emissions 50% below 2005 levels by 2030 on the way to net-zero carbon by mid-century.”

“Over the last few years, America’s Pledge has repeatedly demonstrated the immense power, potential, and significance of non-federal leadership, not just domestically but on the world stage,” Wendy Jaglom, manager of the Rocky Mountain Institute’s U.S. program, told Greentech. “It’s this combination of the two—non-federal leadership combined with the federal government—that can get us back on track for U.S. climate action.”