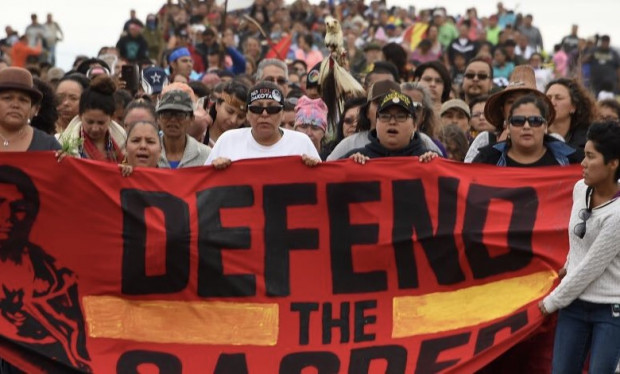 Reporters Without Borders/Reporters sans frontières (RSF), a non-profit organization defending freedom of the press and access to information, along with the organizations below, write to express deep concerns regarding charges against multiple journalists for their coverage of protests against the Dakota Access Pipeline.

The undersigned have collectively documented at least 10 journalists currently facing charges stemming from their reporting on the protests. Filmmaker Jahnny Lee is being charged with physical obstruction of a government function and is next due to appear in court for an arraignment on March 22. Myron Dewey, owner of Digital Smoke Signals, a website that includes news, videos, and forums, is being charged with stalking for allegedly using a drone to film private security guards. He is next due to appear in court for a bench trial on March 30.

Other journalists still facing charges include freelancers Sara Lafleur-Vetter, Jihan Hafiz, Adam Schrader, Jenifer Stum, Jenni Monet, Tracie Williams, and Tonita Cervantes, and Lorenzo Serna, from Unicorn Riot. On March 2, 2017 RSF joined a coalition of media associations and press freedom organizations in a letter to the Morton County Sheriff’s office asking that it drop all pending charges against journalists who had been covering the events at Standing Rock, or justify the arrests of reporters in the course of their work.

Several journalists have said they were arrested despite attempting to follow police orders to disperse or remain behind police lines. Monet said in a column for the Columbia Journalism Review that she was arrested while following an officer’s order to leave an area where protests were taking place.

Most of the journalists facing charges are either freelancers or are from smaller, independent outlets that lack the resources to pay attorney fees or mount a public defense. The fact that these journalists do not have the backing of large media companies may make them more vulnerable—but it does not lessen their First Amendment protected right to report the news.

Journalists have an important role in documenting incidents in the public interest, such as the construction of the Dakota Access Pipeline and the multiple protests around it, including instances of civil disobedience and law enforcement operations.

The fact that journalists are being arrested in the context of this reporting not only has a chilling effect on press freedom by discouraging media from covering such stories, but it also does broader harm to the American people who have an important interest in accessing this information but are denied it when journalists are detained and arrested. Furthermore, public trust in the government is undermined when the media are restrained from performing their job of informing the public and, in fact, are prosecuted for doing so.

We urge you to uphold the First Amendment rights of these journalists to report the news and call for charges against them to be dropped, or justify the arrests of reporters in the course of their work.
Sincerely,
Delphine Halgand
North America Director
Reporters Without Borders