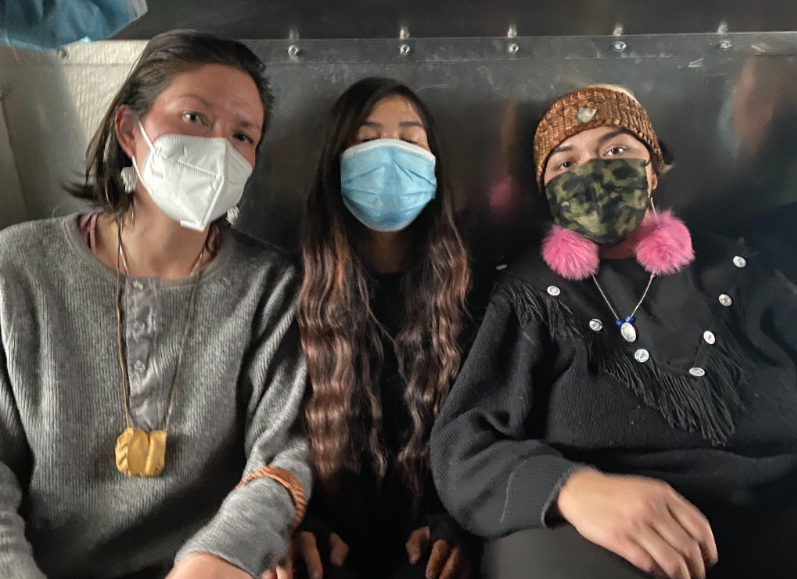 Next Court Appearance On June 1.

“On April 13, 2022 twenty seven land defenders arrested in the fall and into winter of 2021 on Wet’suwet’en territory appeared virtually before Justice Church.

Coastal Gaslink’s lawyer, Kevin O’Callaghan, recommended that the charges be criminal contempt, and not civil contempt.

…this would mean that the land defenders arrested during the Coyote Camp occupation at the drill pad site and the Likhts’amisyu Chief arrested on his own territory would face criminal charges.

…are abusing the intent of the court injunction to violently and illegally criminalize sovereign Wet’suwet’en people in an attempt to push through an industrial project that does not have the consent of the true title holders to the land.

The police have repeatedly used excessive force against unarmed Indigenous women and continuing to use an injunction to resolve Indigenous land issues will only result in further conflict and crisis.

The next court appearance for land defenders is scheduled for June 1st, 2022

At this appearance the crown prosecutor, Trevor Shaw will tell the court whether or not the BC Prosecution Service will intervene and take over the proceedings.

Visit http://yintahaccess.com and write to David Eby with your concerns.  AG.Minister@gov.bc.ca.”

The template letter to Eby is here.

Earlier in the week, Gidimt’en Checkpoint also tweeted: “Since March, RCMP have sent 6-8 officers into our village site, between 4-8 times each day, in order to harass & intimidate our elders, relatives & supporters.”

They then tweeted: “Come to the yintah and be a legal observer!”

They further explain: “We require a rotating team of upwards of a dozen legal observers. Your time and ethical commitment are the most useful assets; necessary supplies and training will be provided by experienced movement members & legal support organizers.”

The application form is here.

This past February, a Coastal GasLink spokesperson stated: “We expect that the micro-drilling [under Wedzin Kwa] will take place starting this spring.”

The Terrace Standard adds: “[The] company is getting ready to install a starting shaft which is a deep circulation excavation acting as an entry point on the east side of the [river]. The active tunneling work is expected to take two and half to three months.”

You can also help amplify this message with this tweet:

We reject Coastal GasLink’s call for criminal charges against the water protectors defending #WedzinKwa from its fracked gas pipeline. The company is preparing to drill under the river while the defenders face a court date on June 1. More: https://t.co/dkTJ3eBxyN #DropTheCharges pic.twitter.com/prvWAzpVUu