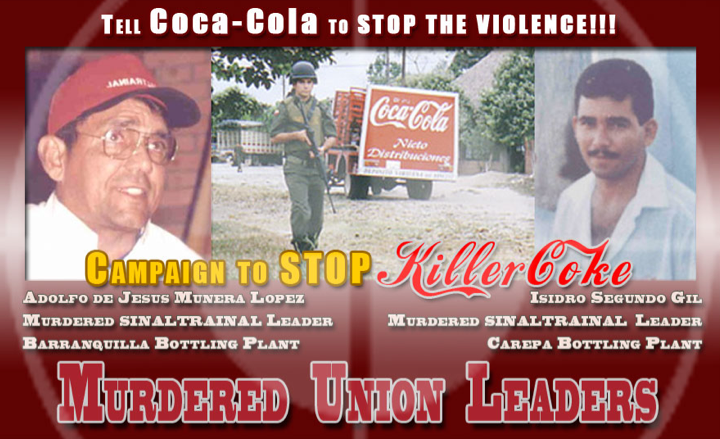 Strong labor unions are critical to improve wages, working conditions and human rights for all workers and for democracies to flourish. For workers in Colombia and Guatemala, a strong union can also mean the difference between life and death.

The Campaign to Stop Killer Coke originated to stop the gruesome cycle of violence against union leaders and organizers in Colombia in efforts to crush their union, SINALTRAINAL. Since then, violence, abuse and exploitation leveled against Coke workers and communities have been uncovered in other countries as well, notably China, El Salvador, Guatemala, India, Mexico and Turkey.

Colombia
In Colombia, the importance of winning the struggle against Coke was best summed up by SINALTRAINAL Vice President Juan Carlos Galvis when he said:

Lawsuits were filed in the United States in 2001 and 2006 by the United Steelworkers of America and the International Labor Rights Fund on behalf of SINALTRAINAL, several of its members who were falsely imprisoned and the survivors of Isidro Gil and Adolfo de Jesus Munera, two of its murdered officers. The lawsuits charged Coca-Cola bottlers “contracted with or otherwise directed paramilitary security forces that utilized extreme violence and murdered, tortured, unlawfully detained or otherwise silenced trade union leaders.” The lawsuits and campaign were developed to force Coca-Cola to once and for all end further bloodshed, compensate victims and provide safe working conditions.

The Campaign called for the main judge, Joseph E. Martinez, who presided over the original lawsuits against The Coca-Cola Co. and its Colombian bottlers in Federal District Court in Miami, Florida, to recuse himself because of serious conflicts of interest and statements he made about the case. (Read “Talking Points” 3 on Martinez)

Coca-Cola, which is virulently anti-union, claims that any allegations that its bottlers in Colombia are involved in the systematic intimidation, kidnapping, torture, and murder of union leaders are false. Yet the company has fought every effort to have an independent investigation into these allegations while at the same time has misled the public and its own shareholders with a long string of lies and bogus investigations. (Read “Talking Points” 4 on bogus investigations)

Guatemala
On February 25, 2010, another human rights abuse lawsuit against Coca-Cola was filed in the Supreme Court of the State of New York and later moved to federal district court. “This case involves a campaign of violence – including rape, murder, and attempted murder – against trade unionists and their families at the behest of the management of Coca-Cola bottling and processing plants in Guatemala.”

It should be noted what happened in the ’70s and ’80s in Guatemala City: According to “Soft Drink, Hard Labor” published by the Latin America Bureau (UK) in 1987, “For nine years the 450 workers at the Coca-Cola bottling plant in Guatemala City fought a battle for their jobs, their trade union and their lives. Three times they occupied the plant — on the last occasion for 13 months. Three General Secretaries of their union were murdered and five other workers killed. Four more were kidnapped and have disappeared. Against all the odds they survived.”

Turkey
In Turkey, in 2005, 105 workers at a Coca-Cola bottling plant in Istanbul joined a union and were terminated. They organized a lengthy sit-down strike in front of the main offices of Coca-Cola in Turkey. After several weeks of protesting, Coca-Cola workers entered the building to demand their reinstatement. While leaders of the workers were meeting with senior management for the company, the company ordered Turkish riot police to attack the workers who were by all accounts peacefully assembled, many with their spouses and children. Nearly two hundred of them were beaten badly and many required hospitalization. Lawsuits are pending.

China
In China: Based on undercover investigations at several Coke plants, Chinese press reported in December 2008 that Coke employees are “involved in the most dangerous, intense and tiresome labor, work the longest hours, but receive the lowest wages and face arrears and even cutbacks in their pay.” One investigator claimed that Coke violated Chinese labor laws and reported that workers “often worked 12 hours per day for an entire month without a single day off.”

In a report, “Violence in Coca-Cola’s Labor Subcontracting System in China,” it was revealed:

“On the 12 August 2009, a labor dispatch company hired by Coca-Cola’s designated Hangzhou-based bottling plant was discovered to have threatened two university student-workers who asked for their own and their two other fellow workers’ back pay upon their resignation. Xiao Liang, 24, was beaten up by two managers at the labor dispatch company’s office, resulting in serious wounds over his left eye, left hand, and right ear. Xiao Xu sent Xiao Liang to the Dongfang Hospital immediately after police arrived on the scene. Xiao Liang was later diagnosed with a ruptured eardrum, resulting in compromised hearing capacity…”

Two years earlier, BBC News (5/21/07) reported that Coca-Cola has been accused of benefiting from prison labor in China.

Mexico
Mexico, the country with the highest per capita consumption of Coca-Cola, is a huge profit center for Coke to the detriment of the health of millions of children and adults who suffer an inordinate rate of obesity, diabetes and other serious maladies. Dr. Ann Lopez, author and environmental science Professor, Ph.D. at San Jose City College in California, and Director of the Center for Farmworker Families states:

“The people of west central Mexico are easy corporate prey for predator Coke. You can’t stand anywhere in some of the rural towns and not see a Coke ad. I’ve seen what Coke is doing in the west central Mexico countryside where I do research: pushing their addictive products on peasant populations who can ill afford them and in which one in 10 may have undiagnosed diabetes.”

To control the soft drinks market in Mexico, Coca-Cola has shown repeatedly it will break the law. The Angel Alvarado Agüero case, currently in the Mexican courts, describes how this former marketing executive of Coca-Cola was unjustifiably dismissed when he refused to carry out illegal monopolistic marketing practices as directed by the Company. This case also highlights how The Coca-Cola Co. is cheating Mexican workers out of hundreds of millions of dollars in profit sharing and other benefits and shortchanging the Mexican government out of millions of dollars in tax revenues.

Investigative reporter Beverly Bell pointed out that “…more than 12 million people do not have access to potable water in Mexico.” She explains how then-Mexican President Vicente Fox, who prior to his election in 2000 was president of Coca-Cola in Mexico and Latin America, “…with help from the World Bank-has successfully pursued water privatization, as well as a massive land privatization program, that allowed companies free access to all the resources on the land, including water.”

Bell wrote in 2006, “Since 2000 [while Fox was president], Coca-Cola has negotiated 27 water concessions from the Mexican government. Nineteen of the concessions are for the extraction of water from aquifers and from 15 different rivers, some of which belong to indigenous peoples. Eight concessions are for the right of Coke to dump its industrial waste into public waters.”

El Salvador
In addition to abuse of workers, Coke has been involved in the exploitation of children by benefiting from hazardous child labor in sugar cane fields in El Salvador. This was first documented by Human Rights Watch in 2004 and in footage taken in 2007 for a nationally-televised British documentary and highlighted in Mark Thomas’s book “Belching Out the Devil: Global Adventures with Coca-Cola,” published in 2009 in the U.S.

Representatives of the International Labor Organization interviewed company representatives at Colombian Coca-Cola bottling plants in 2008 to ascertain whether they exercised any control of suppliers of raw materials (such as sugar) to ensure that they did not use child labor. The manager at the Coke plant in Cali said that their suppliers should not use child labor, but added “that the enterprise [Coca-Cola] did not yet exercise oversight over this issue.”

India
Of the 200 countries where Coca-Cola is sold, India reportedly has the fastest-growing market, but the adverse environmental impacts of its operations there have subjected The Coca-Cola Co. and its local bottlers to a firestorm of criticism and protest. There has been a growing outcry against Coca-Cola’s production practices throughout India, which are draining out vast amounts of public groundwater and turning farming communities into virtual deserts. Suicide rates among Indian farmers whose livelihoods are being destroyed are growing at an alarming rate. Every day for years there has been some form of protest, from large demonstrations to small vigils, against Coca-Cola’s abuses in India.

One target of protest has been the Coca-Cola bottling plant in Plachimada, Kerala, which has remained shut down since March 2004 as a result of the community-led campaign in Plachimada challenging Coca-Cola’s abuse of water resources.

The International Environmental Law Research Centre issued a report in 2007 that stated, in part, “The deterioration of groundwater in quality and quantity and the consequential public health problems and the destruction of the agricultural economy are the main problems identified in Plachimada. The activity of The Coca Cola Company has caused or contributed a great deal to these problems…The availability of good quality water for drinking purposes and agriculture has been affected dangerously due to the activity of the Company. Apart from that, the Company had also polluted the agricultural lands by depositing the hazardous wastes. All these points to the gross violation of the basic human rights, that is, the right to life, right to livelihood and the violation of the pollution control laws.”

In 2009, the government of Kerala set up the High Power Committee to Assess the Extent of Damages Caused by the Coca-Cola Plant at Plachimada, India, which “recommended that Coca-Cola be held liable for Indian Rupees 216 crore (US$ 48 million) for damages caused as a result of the company’s bottling operations in Plachimada.”

The human rights abuses discussed above are but one aspect of Coke’s sinful world. But if you study this website, you will find up-to-date news, reports and other information that shows the world of Coca-Cola is a world full of lies, deception, immorality, corruption, and widespread labor, human rights and environmental abuses, and that Coke has inflicted great hardship and despair upon many people and communities throughout the world.

When people see Coca-Cola ads, they should think of crimes and misconduct on a worldwide scale so unthinkable that all of Coke’s products become undrinkable!

We would appreciate any additional information regarding Coca-Cola abuses that we can use to further document Coke’s crimes throughout the world. We can be contacted at info@KillerCoke.org or (718) 852-2808.

In the meantime…boycott the 3300 Coca Cola Products.