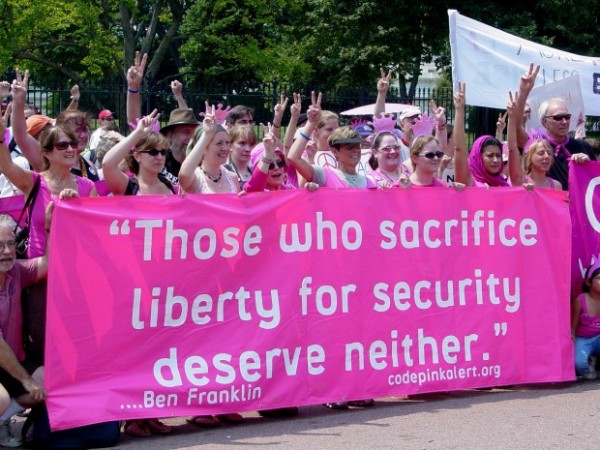 The US Peace Memorial Foundation has awarded its 2014 Peace Prize to CODEPINK Women for Peace “In Recognition of Inspirational Antiwar Leadership and Creative Grassroots Activism.”  Michael Knox, Chair of the Foundation, presented the award on August 7, during a ceremony at The New Peace Center in Culver City, CA.

The plaque was accepted by co-founders Medea Benjamin and Jodie Evans, to overwhelming applause from an audience of about 100 people.  In his remarks, Knox thanked CODEPINK for the great courage its members have shown and for the sacrifices they have made for peace.  “CODEPINK is the most innovative, effective, and visible antiwar presence in the United States.  Its approaches to peace and opposition to war are contemporary and receive more media and government attention than any other peace group. CODEPINK has shown what volunteers can do with limited resources.  Their service is an inspiration to the world.”

In learning of the award, Jodie Evans remarked, “What a wonderful honor for tens of thousands of women and men of CODEPINK who take action, write letters to the editor, organize locally, travel globally, and live intentionally to create a more peace filled world.  I feel blessed to work with this posse of angels who live from their hearts and gather under the banner CODEPINK, and those we collaborate with around the world who know that war is not the answer and the money we spend on war, weapons, and violence needs to be invested in our communities to achieve the peace and justice we all desire.”

Medea Benjamin noted: “After more than a decade of perpetual war, the American people are both war weary and war wise, understanding that a military response to violence only leads to more violence.  While the military contractors and weapons manufacturers have made a killing, the rest of us – at home and abroad – have had to deal with death, suffering, PTSD, corruption, and depleted economies.  I am honored to be part of a vibrant peace movement in CODEPINK and beyond, a movement that is now gaining traction with the general public that is more and more wary of calls for foreign military adventures.  We don’t do this work for recognition, but after so many years of exhausting work, getting this prize from the US Peace Memorial Foundation inspires us to continue our efforts to build a world where we take care of each other and our precious planet, and send the weapons-makers back to the drawing board to come up with a new set of products that are not designed to kill.”

CODEPINK is the first organization to be recognized in this way by the Foundation.  Previous Peace Prize recipients are Chelsea Manning, Medea Benjamin, Noam Chomsky, Dennis Kucinich, and Cindy Sheehan.  Nominees considered this year include American Friends Service Committee, Garry Davis, Psychologists for Social Responsibility, the Jeannette Rankin Peace Center, and David Swanson.  You can read about the antiwar/peace activities of all recipients and nominees in our publication, the US Peace Registry.

The US Peace Memorial Foundation’s highly focused mission is to honor Americans who stand for peace by publishing the US Peace Registry, awarding an annual Peace Prize, and planning for the US Peace Memorial in Washington, D.C.  These projects can help move the United States toward a culture of peace, as we honor the millions of thoughtful and courageous Americans who have taken a public stand against one or more U.S. wars or who have devoted their time, energy, and other resources to finding peaceful solutions to international conflicts.  We celebrate these role models as they inspire other Americans to speak out against war and for peace.

Please help us continue this important work.  Become a Founding Member and have your name permanently associated with peace.  Founding Members are listed on our website, in our publication the US Peace Registry, and eventually at the National Monument.