Above Photo:  Tourists visit Iguazu Falls in Brazil. The falls are part of the world’s largest reservoir of fresh water, known as the Guarani Aquifer. They are in the middle of thick jungle that has more than 1,000 plant and hundreds of animal species., March 15, 2015.(AP/Jorge Saenz)

A concerted push is underway in South America that could see the Guarani Aquifer, one of the world’s largest reserves of fresh water, soon fall into the hands of transnational corporations such as Coca-Cola and Nestle.

A concerted push is underway in South America that could see one of the world’s largest reserves of fresh water soon fall into the hands of transnational corporations such as Coca-Cola and Nestle. According to reports, talks to privatize the Guarani Aquifer – a vast subterranean water reserve lying beneath Argentina, Brazil, Paraguay, and Uruguay – have already reached an advanced stage. The deal would grant a consortium of U.S. and Europe-based conglomerates exclusive rights to the aquifer that would last over 100 years.

Named after the Guarani indigenous people, the Guarani Aquifer is the world’s second largest underground water reserve and is estimated to be capable of sustainably providing the world’s population with drinking water for up to 200 years. Environmental groups, social movements, and land defenders warn that the exploitation of the freshwater reserve could see the 460,000-square mile (1.2 million sq. km.) reservoir sacrificed for the short-term profits of agribusiness, energy, and food-and-drink giants.

For global behemoths like U.S.-based Coca-Cola and Swiss Nestle, the extraction and sale of drinking water – a finite resource and a basic necessity for all living beings – is especially lucrative. Water intended for public use is enriched with various minerals or combined with cheap sweeteners and other ingredients before being bottled and sold at a massive profit.

The plunder of South America’s water 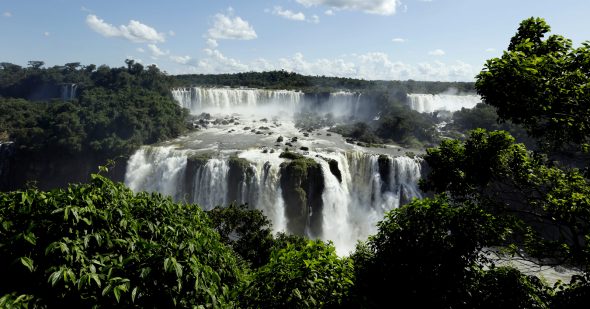 Iguazu Falls cascade near Foz do Iguazu, Brazil, March 14, 2015. Iguazu Falls, on the border of Argentina and Brazil, is part of the Guarani Aquifer, one of the world’s major underground reserves of fresh water. (AP/Jorge Saenz)

In Brazil, intense lobbying has been underway since at least 2016 to tap into the aquifer. These efforts fell under the spotlight late last month at the World Economic Forum in Davos, Switzerland, where private talks were reported between Brazil’s President Michel Temer and a range of top executives with interests in the aquifer, including Nestle CEO Paul Bulcke, Anheuser-Busch InBev CEO Carlos Brito, Coca-Cola CEO James Quincey, and Dow Chemical CEO Andrew Liveris.

As leading Brazilian water-rights activist Franklin Frederick noted in Brasil de Fato, these companies belong to the 2030 Water Resources Group (2030WRG), a transnational consortium that includes AB Inbev, Coca-Cola, Dow, Nestle and PepsiCo. 2030WRG bills itself as “a unique public-private-civil society collaboration” and hides its intention to privatize developing nations’ water supplies by claiming to “facilitate open, trust-based dialogue processes to drive action on water resources reform in water-stressed countries in developing economies” and “close the gap between water demand and supply by the year 2030.”

According to corporate accountability advocates, in truth the group is “an unmistakably activist campaign by the private water industry to gain funding and credibility for a radical power grab.”

Temer’s coup and the “new Brazil” 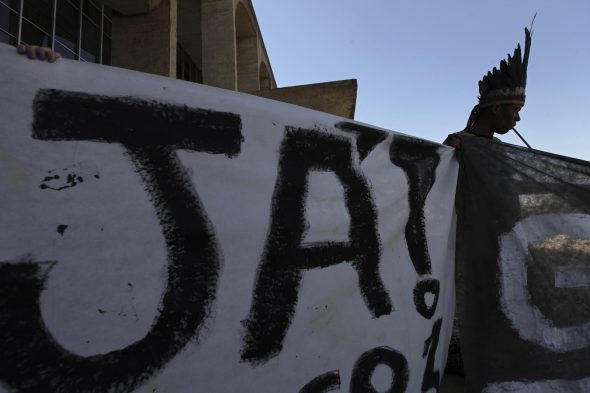 Brazil’s unelected President Temer is no stranger to radical power grabs: the deeply unpopular head of state came to power himself in August 2016 through a legislative coup that deposed his predecessor, Dilma Rousseff. Since then, his government has implemented a broad-ranging restructuring of Latin America’s largest economy and rolled back progressive policies established by the previous Workers Party government, such as environmental protections, poverty reduction programs, labor protections, and barriers to the privatization of natural resources.

According to Correio do Brasil, negotiations between coup figures and transnational conglomerates regarding the privatization of the Guarani Aquifer kicked off before the impeachment trial of former elected President Rousseff had even begun. In an article from August 2016 titled “Multinationals want to privatize water use and Temer negotiates,” a senior official in Brazil’s National Water Agency noted that a public hearing on the privatization of water was postponed on the same day the impeachment process began, because talks between Temer, Coca-Cola and Nestle were already “striding forward” at a rapid pace.

Representatives of [Nestle and Coca-Cola] have held meetings with government authorities to formulate procedures for exploitation by private companies of water sources, especially in the Guarani Aquifer, in concession contracts for over 100 years — [the senior official] added.”

At the Davos forum, Temer trumpeted his government’s 20-month track record of transforming Brazil into a readily-exploitable country rich with opportunities for transnational capitalist elites:

Brazil’s water wealth has long been a source of profit for the country’s export industries, which deal in such commodities as beef, biofuels, rice, and oil and gas extracted through hydraulic fracturing. However, the deregulation of public control over land use and resource management has resulted in the reckless plunder of water resources, major pollution, and land grabs affecting indigenous nations and the rural poor in the region.

While a third of the Guarani Aquifer lies beyond Brazil’s borders, the right-wing governments in neighboring Argentina and Paraguay have also reportedly agreed to grant 100-year concessions to companies wishing to exploit the aquifer, with only Uruguay’s left-of-center government refusing to grant approval.

Militarization and the imperialist theft of Latin America’s resources 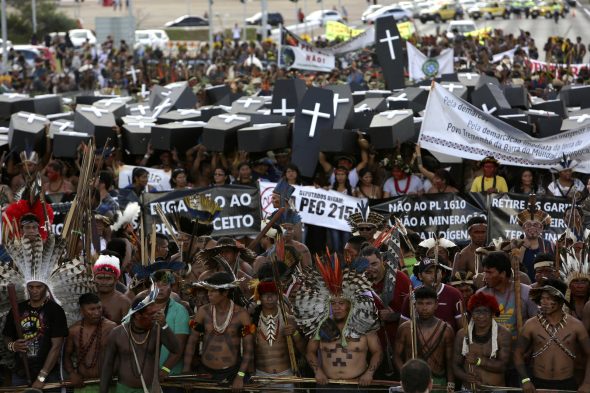 Indigenous protesters from various ethnic groups carry coffins representing indians killed over the demarcation of land, as they demand the demarcation of indigenous lands, outside the National Congress in Brasilia, Brazil. In May, Congress passed two measures that convert around 1.4 million acres of protected land, the vast majority of it in the Amazon, into areas open to logging, mining and agricultural use. (AP/Eraldo Peres)

The push to privatize the Guarani Aquifer comes amid an increased militarization of the region by the Pentagon.

In May of 2016, the neoliberal government of Argentine President Mauricio Macri agreed to grant permission to the U.S. military to build a base in the jungle region known as the Triple Border, which lies directly on top of the Guarani Aquifer on the borders of Argentina, Brazil and Paraguay. U.S. officials and media figures have long claimed that the area is a hotbed of alleged criminal activity, such as drug trafficking and counterfeiting intended to raise funds for Lebanese resistance movement Hezbollah.

As far back as 2004, critics like Elsa Bruzzone of Argentina-based progressive veterans’ group CEMIDA noted accused the U.S. of alleging a “terrorist presence” in the region “so they can install a military base and exert control over the water.”

Relating a common perception, observer Vincent Lofaso of the Council on Hemispheric Affairs also notes that Washington’s interest in the Triple Border may have more to do with the aquifer’s abundant water reserves than with so-called “international terrorism,” and says that the new U.S. base will deprive local indigenous communities of access to clean water supplies, fishing, and the freedom to navigate their region.

Under Temer, as well, the defense establishments of the United States and Brazil have formed an increasingly close relationship, recalling close ties between Washington and Sao Paolo during the 21-year military dictatorship that ruled the country following 1964’s right-wing coup. Last November, U.S. military personnel took part in military drills in the Brazilian Amazon involving 2,000 troops from Brazil, Colombia and Peru – all countries that have right-wing governments that have pushed forward hard-line corporate policies.

As the so-called “pink tide” of progressive elected governments in Latin America recedes and the U.S. reasserts a Monroe Doctrine claiming sovereignty over the Americas, the world faces an ever-increasing danger that our priceless shared environment will fall like ripe fruit into the hands of transnational corporations obsessed with short-term gains rather than protecting humanity’s basic needs for present and future generations.