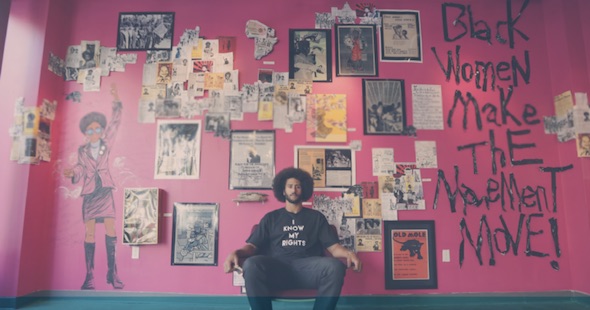 Colin Kaepernick Is Being Blackballed By Billionaire NFL Owners

Colin Kaepernick took a courageous and principled stand last season by kneeling during the national anthem before NFL games. This was done in response to a society that continues to systematically, culturally, and institutionally devalue black lives. This devaluation is played out in many areas, including politics, economics, housing, employment, and perhaps most notably, within the criminal punishment system. Black lives are routinely extinguished by police in the streets without recourse, in the courts without pause, and in the prisons without hesitation. Entire generations of black Americans have essentially been destroyed through the “school-to-prison pipeline” and a system of mass incarceration, for which author Michelle Alexander has properly deemed, The New Jim Crow.

Kaepernick recognized this and felt compelled to bring attention to it. He openly protested the national anthem, donated hundreds of thousands of dollars to community agencies, and started a national youth camp program to teach children from marginalized communities about self-empowerment.

This offseason, he brought a box of 100 suits to hand out to parolees outside a Queens (New York City) parole office, has continued to donate $100,000 per month to various community programs, with $50,000 recently going to Meals-On-Wheels (after Donald Trump’s budget cuts were announced), and has and even arranged (with Turkish Airlines) for food and water to be flown into Somalia in an attempt to address famine-stricken areas there.

He is now a free agent, in the prime of his career, and without a job. By all “measurables” (and the NFL is big on “measurables”), Kaepernick should have a starting job somewhere. He is only 29 years old and has a prototypical quarterback build at 6-foot-4 and 230 pounds. He’s brought a team to the Super Bowl. His career numbers, in what amounts to just over three full seasons, are very impressive: 12,271 passing yards, 2,300 rushing yards, a passer rating of 88.9, and a 72/30 touchdown/interception ratio, which is remarkable for an NFL quarterback with such little experience. Despite playing for one of the worst teams in the NFL in 2016, he still managed to put up very good numbers in only 12 games: 2,241 passing yard, 468 rushing yards on a 6.8 yards-per-carry average, a 16/4 TD/INT ratio, and a passer rating of 90.7. His passer rating in 2016 was higher than that of 13 other starting quarterbacks, including Eli Manning, Cam Newton, Philip Rivers, Carson Palmer and Joe Flacco.

When considering these measurables, his performance record, and the fact that he is in the prime of his football career, it is unimaginable that he is not only without a roster spot, but that he is without a starting job on one of the 32 teams in the NFL. The only reasonable explanation for Kaepernick’s newfound unemployment status is that he’s being blackballed by billionaire NFL owners.

If you’re still wondering why @kaepernick7 hasn’t been signed by an @nfl team, @reesewaters was able to get a few… https://t.co/LvibZLayiY pic.twitter.com/mL4fI95LJ7

We’ve seen this before. Muhammad Ali, Mahmoud Abdul-Rauf, Craig Hodges, Tommie Smith and John Carlos all faced similar treatment after using their platforms to take principled stands. Kaepernick has made millions of dollars in the NFL, so he will be fine either way. But there are many lessons to be learned from this situation.

One important lesson is how the owning class relies on patriotism to help protect and secure its position in society. The notion of patriotism is one that tells the American working class that they have a deep, common bond with the American capitalist class. This, of course, couldn’t be further from the truth. As being consistent with capitalism, the owning-class minority has driven the working-class majority into widespread deprivation in order to secure more and more wealth for itself. One way to hide this reality is to create an artificial bond based on geographic and cultural nationalism—patriotism.

While globalizing its capital, the owning class calls for “national unity.” While laying off American workers in mass, it airs multimillion-dollar ad campaigns celebrating patriotic loyalty. While employing foreign workers for slave wages, it parades its brand name during celebrations of “national independence.” While driving wages down and forcing American workers on to welfare rolls, it asks that you celebrate “American values.” While systematically exploiting the majority, it demands that this majority remain loyal to its nationalistic ties.

It is not enough that Colin Kaepernick is proving to be a modern-day Roberto Clemente, or that he’s following the path of the great Muhammad Ali. American society (and its sports industries) under capitalism demands that profit remains a priority over people. In order to maintain this, it must insist that workers bow down to bosses, that citizens refrain from questioning their rulers, that everyday people not dare to step out of line.

WATCH: Richard Wolff Explains How U.S. Economic Education Gives the Illusion That ‘Everything Is All Right’

Patriotism (and the unquestioned obedience that comes with it) is a crucial tool for the owning class. To them, Kaepernick’s refusal to submit to this nationalistic ritual was not merely “disrespect.” It was a potentially damaging challenge to this important tool that is wielded in their quest to extract all of society’s wealth (through a docile working class). For this reason, it is vitally important that Kaepernick be taught a lesson. The NFL’s billionaire class is in the process of carrying out this lesson.