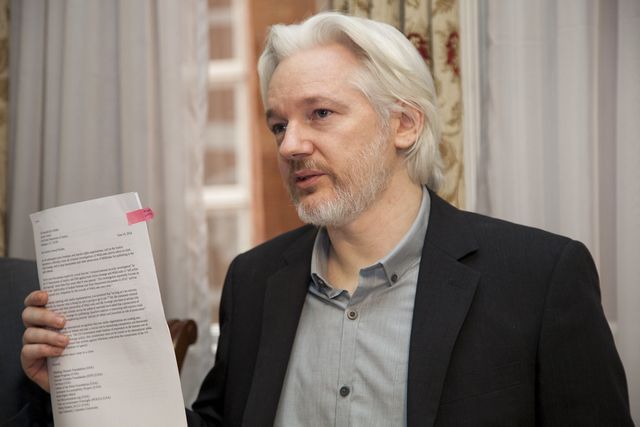 The important article below does a thorough job of documenting the phony Swedish investigation against Assange, how it was part of a plan to silence the most important editor and publisher of the 21st Century and how so many who should have stood by him fell for the character assassination.

For years we have defended Assange against the phony sex crimes investigation against him and applauded his journalism. Those of us who followed his case from the beginning saw how prosecutors declined to indict Assange from the outset, how Assange met with Swedish investigators before going to the UK and how he offered interviews to the politicized prosecutor who restarted the investigation.

The claims of sexual assault or rape seemed like a set-up from the beginning yet it fooled many. People who had supported Assange fell for the character assassination. Now, that the investigation has been dropped for ‘lack of evidence’ — the same reason it was not pursued by initial prosecutors a decade ago — the truth is coming out but the damage is done.

Assange is being held without bond for extradition to the United States for charges that should never have resulted in an indictment. The problematic  Espionage Act has never been used against a journalist before and the charges against Assange should be dropped. He exposed serious war crimes and ethical violations by the United States and its allies. He is being punished for telling the world the truth. People need to show solidarity with Julian Assange and demand his release and the charges against him being dropped. KZ

Swedish prosecutors announced yesterday that, after almost 10 years, they were finally abandoning a “preliminary investigation” into allegations of “sexual misconduct” against WikiLeaks founder Julian Assange. Sweden’s deputy chief prosecutor, Eva-Marie Persson, told a press conference that there was “insufficient evidence” to proceed.

The ignominious collapse of the investigation—which, over the course of a decade, was dropped three times and never passed beyond the “preliminary” stage—brands it as a state frame-up and dirty tricks operation. It demonstrates that Assange has been the victim of an unprecedented international political conspiracy, spearheaded by the US, and aided and abetted by its allies, including Sweden, Britain and Australia.

The ending of the investigation is an absolute vindication of the warnings made by Assange since 2010 that the sole purpose of the Swedish allegations was to blacken his name and provide an alternate route for his dispatch to an American prison.

After 10 years of sordid machinations and flagrant violations of international and domestic law, the Swedish investigation lies in tatters, while Assange is held in a maximum-security British prison awaiting proceedings for his extradition to the US, where he faces a sentence of up to 175 years imprisonment for exposing war crimes and global diplomatic conspiracies.

All the smears—endlessly trumpeted by the corporate press as proof that Assange was a “sex offender” or even a “rapist”—stand exposed as lies and fabrications, concocted to victimise, besmirch and persecute a courageous journalist and publisher.

The complete discrediting of the Swedish investigation, which played such a linchpin role in the US-led vendetta, exposes the utterly lawless character of the entire operation against Assange.

As UN Special Rapporteur on Torture Nils Melzer stated in an official letter to the Swedish government publicly released last week, the investigation “was the primary factor that triggered, enabled and encouraged the subsequent campaign of sustained and concerted public mobbing and judicial persecution against Mr. Assange in various countries, the cumulative effects of which can only described as psychological torture.”

Despite never coming close to the issuing of criminal charges, the Swedish investigation was used to embroil Assange in the legal system and was the chief mechanism for enforcing his arbitrary detention.

It was Britain’s backing for Sweden’s unprecedented request that Assange be extradited merely to “answer questions” that forced him to seek political asylum in Ecuador’s London embassy in 2012. The Swedish case provided the bogus rationale for Britain’s siege of the embassy and its threats that it would arrest Assange if he set foot outside the building.

The investigation was used relentlessly to slander Assange and to try and undermine the immense public support for him. It created the political climate in which the WikiLeaks’ founder could be dragged from Ecuador’s London embassy by the British police in April this year and the US could openly seek to prosecute him for his legally-protected publishing activities.

The Swedish allegations, moreover, provided the ideological and political cement for the unholy alliance that was assembled against Assange, spanning from the blood-soaked American intelligence agencies, to the official political parties in the US, Britain and Australia, to the corporate media, the pseudo-left and innumerable practitioners of identity politics.

All of these organisations—hostile to Assange because he had exposed the social and political order that they defend—used the Swedish allegations to conduct what Melzer accurately described as a ruthless “public mobbing” of Assange and to justify their backing for the trampling of his legal and democratic rights.

To cite only a handful of examples from thousands:

All the organisations and individuals who made such statements knew that they were telling lies. The bogus character of the allegations was on the public record.

This included the finding of the initial prosecutor Eva Finne, in August 2010, who stated: “I do not think there is reason to suspect that he has committed rape.” She noted that the “conduct alleged… disclosed no crime at all.” Text messages from one of the complainants stated that “it was the police who made up the charges.”

The litany of “irregularities” in the case included police officers rewriting the statement of one of the complainants without informing her, the intimate involvement of Claes Borgström, a lawyer and politician with close ties to the US state, and the refusal of Swedish prosecutors to interview Assange by video-link or in London, as they had done in hundreds of other cases.

Most sinisterly, those who promoted the Swedish frame-up derided the suggestion that it had anything to do with the American pursuit of Assange—despite the otherwise inexplicable refusal of the Swedish authorities to guarantee that they would not extradite Assange to the US if he came into their custody.

The allegations, moreover, were first concocted by the police in August 2010, under conditions where senior US politicians were publicly calling for Assange’s assassination for having exposed their war crimes. The US government had launched an investigation “unprecedented in scale and nature,” which included the establishment of a “war room” staffed 24 hours a day by FBI and CIA agents explicitly tasked with destroying WikiLeaks.

The blueprint for the frame-up was later revealed in a leaked email from Fred Burton, a former US intelligence official and chief security officer for Stratfor, a private company described as a “shadow CIA.” In December 2010, he wrote to an associate that the US strategy against Assange was: “Pile on. Move him from country to country to face various charges for the next 25 years.”

All those who legitimised the Swedish investigation functioned as the footsoldiers of this CIA campaign.

The frame-up of Assange, however, has encountered resistance from the most principled artists and public intellectuals, from renowned investigative journalist John Pilger, to musicians and entertainers such as Roger Waters, Pamela Anderson and M.I.A.

The exposure of the political conspiracy against Assange is central to the fight that must be waged to prevent his extradition to the US and to secure his complete and unconditional freedom.

The burning urgency of this struggle, which must be the spearhead of a broader campaign against imperialist war and in defence of democratic rights, is demonstrated by the warnings of Assange’s father and UN official Nils Melzer that he may die in Belmarsh Prison, and by the lawless conduct of the British judiciary.

The World Socialist Web Site and Socialist Equality Party are fighting to organize resistance all over the world to the persecution of Assange, as part of the struggle to mobilize the working class in defense of democratic rights. Contact us today to take part in this fight.