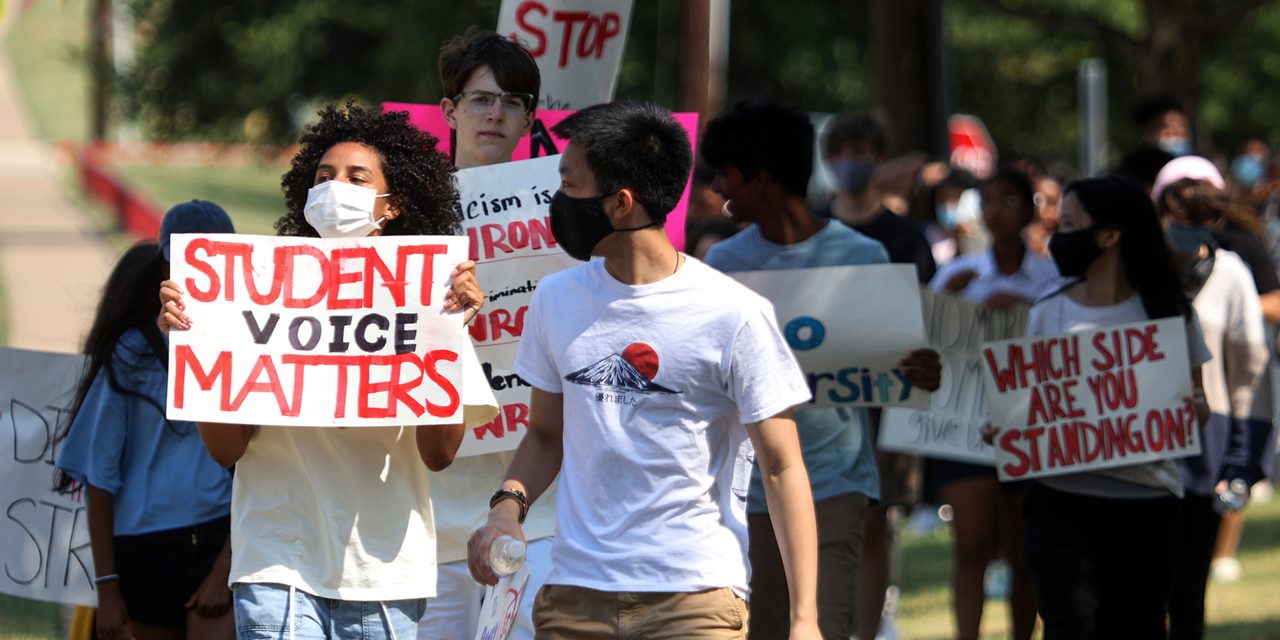 Colleyville – Over 100 students walked out of their Friday morning classes at Colleyville Heritage High School to show their support of James Whitfield, the high school’s first Black principal who was placed on paid administrative leave last month.

They want answers from school administrators as to why Whitfield is on leave.

Students carried signs and wrote “We stand with Dr. Whitfield” in chalk on the sidewalks at the high school. They also marched around the school chanting, “Dr. Whitfield’s here to stay.”

Sunehra Chowdhury, a senior at Colleyville Heritage who helped organize the walkout, said she and other students are not backing down or giving up on supporting Whitfield.

She said the school board has contributed to the criticism and hostility toward Whitfield and his family.

At issue are claims that Whitfield introduced critical race theory to Colleyville Heritage, which Whitfield has denied.

Chowdhury and another student, Samantha Zelling, said they are grateful that Whitfield created a welcoming environment for students of color.

“We are both of marginalized groups in this community,” Zelling said. “We grew up in this district, and we know what those experiences are like.”

Whitfield could not be reached for comment Friday afternoon. However, Whitfield retweeted his attorney David Henderson who told WFAA that the superintendent will recommend during Monday’s board meeting that the principal’s contract should not be renewed.

#BREAKING: The superintendent at @GCISD will recommend that the school board on Monday should not renew Dr. James Whitfield’s contract as principal at Heritage High, according to Whitfield’s attorney @OakCliffLawyer.

Kristin Snively, a spokeswoman for the Grapevine-Colleyville school district, said in an email to the Star-Telegram that “small groups of students walked out Thursday and Friday to show their support of Whitfield. In GCISD, it is our goal to teach students to become effective communicators and global citizens; however, leaving or disrupting class is not an appropriate way to demonstrate these traits,” Snively said.

The students said they plan to attend Monday’s school board meeting and speak during the public comment period.

The district previously issued a statement saying that Whitfield’s being on paid administrative leave is a personnel issue and that it had nothing to do with with posting of photos or allegations that he was teaching critical race theory.

Whitfield was asked by the district to take down photos he and his wife had taken on a Mexican beach to celebrate their 10th wedding anniversary. The district released several photos of Whitfield and his wife on the beach that it said were called to its attention.

The principal was accused during a school district board meeting by former school board candidate Stetson Clark of teaching and promoting critical race theory. Whitfield wrote a lengthy Facebook post explaining his position on this issue.