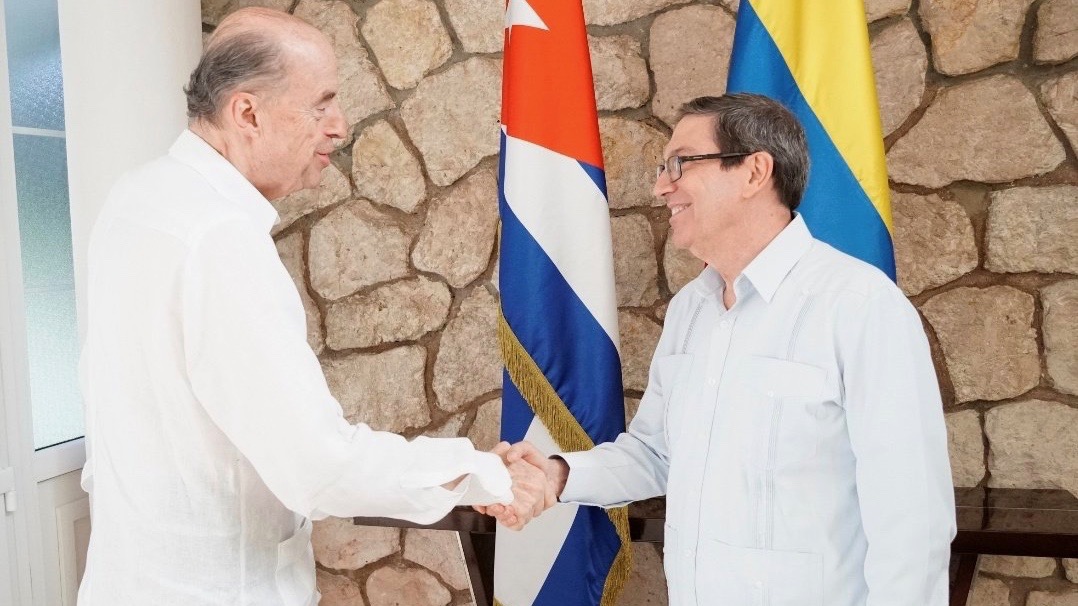 Colombian Foreign Minister Álvaro Leyva Durán announced that the Colombian government aspires to resume the dialogues with the ELN in Cuba and called it the land of peace. He also rejected Cuba’s classification by the United States as a state sponsor of terrorism, and called for its removal from that list.

A delegation of the Colombian government, headed by Foreign Minister Álvaro Leyva Durán, visited Cuba on Thursday, August 11, and was received by Cuban Foreign Minister Bruno Rodríguez in the capital Havana. The purpose of the visit was to establish contact with the leadership of the National Liberation Army (ELN), the largest leftist guerrilla group active in Colombia, in order to advance towards peace negotiations.

Following a meeting between the Colombian government’s delegation, the ELN leaders, and the Cuban government’s representatives at the El Laguito Protocol Hall, Colombian Foreign Minister Leyva announced that the government will resume peace talks with the ELN in Havana. Leyva also confirmed that Cuba and Norway would be guarantors of the peace dialogues, which were interrupted in 2018 by the former conservative president Iván Duque.

“We aspire to resume the dialogues with the ELN in this land of peace in order to start the path proposed by President Gustavo Petro to achieve total peace,” said Leyva.

He also highlighted that “for more than 40 years, Cuba has welcomed in its territory, uninterruptedly, delegates from Colombian governments who have tried to solve the armed conflict in the country.” He recalled that the peace agreements between the then Colombian government of President Juan Manuel Santos and the demobilized Revolutionary Armed Forces of Colombia (FARC) were signed in Havana in November 2016, which were exemplary for the entire world.

In this regard, on behalf of the Petro government, Levya rejected the classification of Cuba by the United States as a state sponsor of terrorism, and called for its removal from that list because “it disregards the island country’s commitment to the peace in Colombia and the world.”

Leyva also expressed Colombia’s support and solidarity with Cuba in the face of the damage caused by the fire that broke out at an oil storage facility in the city of Matanzas last week.

For his part, Cuban Foreign Minister Rodríguez on behalf of the Cuban government reiterated the country’s willingness to support the peace process.

“We see the negotiations with the ELN as an opportunity to move toward peace. We will be at the service of what both parties request,” said Rodríguez.

He also said that the Cuban government would continue to support and contribute, together with Norway, to the implementation of the peace agreement signed with the FARC.

With regard to the hostility of the US toward Cuba and the interruption of the peace process by Duque, Rodríguez said that “the US used as a pretext the presence in Cuba of an ELN peace delegation, which we welcomed at the request of the then president Santos, the ELN and other guarantors, and that his successor, President Duque, politically manipulated it, ignoring state acts signed under International Law.”

He said that Cuba had been “a victim of terrorism, including State terrorism, which is why Cuba is a country that promotes peace. Over the years, it has contributed in a modest and selfless way to the search for and achievement of much-loved and necessary peace for sister nation Colombia.”

Rodríguez also highlighted that the visit of the Colombian delegation, just four days after the inauguration of President Petro, was significant and deepened relations between the governments and people of the two nations.

The first talks with the ELN began in 2017 during the Santos administration in Quito, Ecuador, and a year later were transferred to Havana, Cuba. Following his inauguration in August 2018, Duque suspended the process.

On August 8, in the first press conference to local media after being sworn in as president, Petro confirmed the resumption of negotiations with the ELN, as promised during his election campaign.

According to reports, the delegation from the Petro government was chaired by Foreign Minister Leyva, accompanied by High Commissioner for Peace Danilo Rueda, and the president of the Peace Commission of the Senate, Iván Cepeda. They were accompanied by the representatives of the Episcopal Conference of Colombia, the United Nations and Norway.