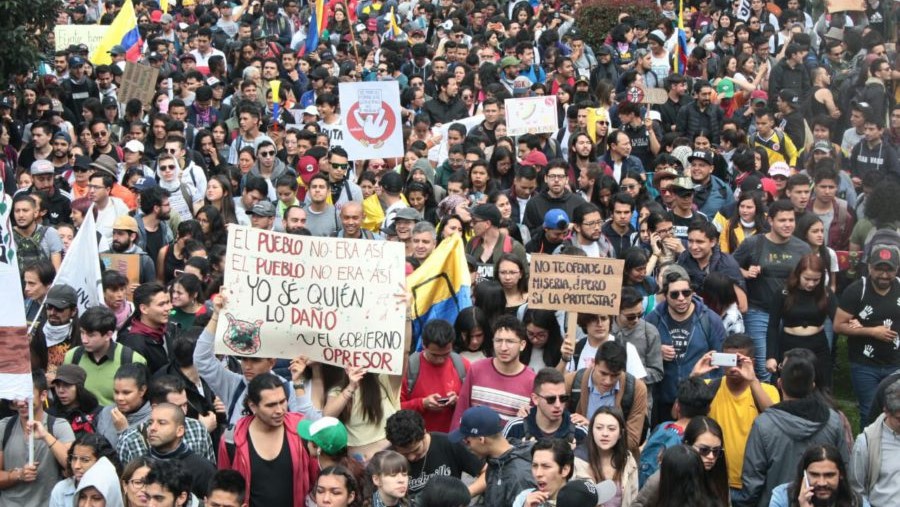 Above Photo: Thousands of Colombians participating in a strike on December 4 against the rise in assassinations of social leaders and the neoliberal economic measures. (Photo: Colombia Informa)

The Colombian National Strike Committee (CNP) has called for a series of fresh protests over the next couple of months after the far-right government of Ivan Duque failed to reach any sort of agreement with them.

The popular uprising against the Duque government began in November last year, with people expressing their opposition to the rising number of assassinations of social leaders in the country and the imposition of neoliberal economic measures by the government.

In the meeting that was held between the government and the committee, according to Telesur, the Colombian executive claimed that it cannot grant several of the strike committee’s requests “as they are beyond its mandate.” The executive refused to discuss issues involving fundamental matters of the state, such as the national defense policy and security.

Subsequently, the CNP has decided to hold its next protest march on February 21. In an official statement issued on Wednesday, the committee said, “The CNP since its beginning, and to defend the strike and mobilizations, has stood for the defense of life and peace. In this context, we have defended the Havana peace agreements and have demanded their implementation and realization.”

The Havana peace agreement was signed between the leftist armed group, Revolutionary Armed Forces of Colombia (FARC) and the National Government led by Juan Manuel Santos in 2016 in Havana, Cuba. However since coming to power, Duque’s government has systematically sought to undermine it.

The Colombian Federation of Education Workers (Fecode) also gave a call for a national strike on February 20 and 21 against state sponsored violence and for defending the right to life.

While issuing the strike call, Fecode president Nelson Alarcon said that in the past 30 years, over 1,100 teachers have been killed in Colombia. In 2019 alone, 14 unionized teachers were killed.

Fecode technician Alejandra Garzon stated that these are not isolated cases and that “the intention was to persecute the teachers because of their union, because of their pedagogical, political, social and community role.”

Alarcon called on Colombians to stand in solidarity with the striking teachers “against the assassination, threats, and attacks against our social and union leaders and the Colombian teachers.”

Meanwhile, the disturbing trend of assassination of social leaders in Colombia is continuing. On Wednesday, February 12, the Villa Fatima’s Community Action Board prosecutor Luis Alberto Parra and his son Jader Alberto Parra were found dead. This was two days after Parra’s wife reported that the two had been kidnapped by a group of armed men who had violently entered their house.

Since the beginning of this year, 44 Colombian social leaders have been killed without the culprits being identified or found. Seven guerrilla fighters have also been killed in this period.

The National Strike Committee is made up of diverse social movements, Indigenous, Afro-descendant and peasant organizations, trade unions, student organizations and other collectives.

The committee is also demanding the immediate dissolution of the Mobile Anti-Disturbance Squadron (ESMAD), the special police unit responsible for the death of dozens of protesters since its formation in 1999; the implementation of effective measures to halt the genocide of social leaders, human rights defenders and ex-combatants; a serious committment by the government to implement the Havana peace agreements; and the re-initiation of peace talks with the National Liberation Army (ELN).