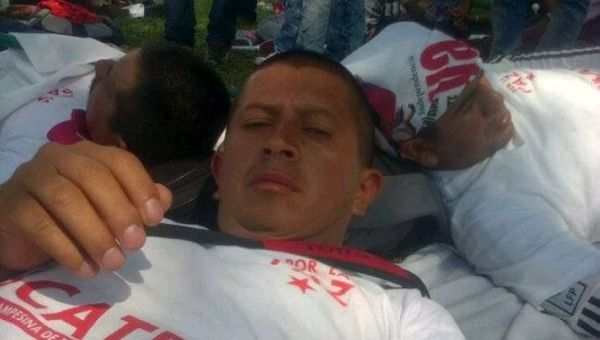 Above Photo: Alvaro Gomez Garzon, one of the over 480 social leaders killed in Colombia since the peace agreement was signed. | Photo: Twitter / @CristianRDelgad

In the context of continuous murders against social leaders throughout Colombia, the Research Institute for Development and Peace (Indepaz) has urged Colombia for a “plan for non-stigmatization and to recognize the importance of leaders, who are the base of democracy.” According to teleSUR’s own count, in 2018  183 leaders have been killed.

Since the peace agreement between the Colombian state and the former Revolutionary Armed Forces of Colombia (FARC) was signed in 2016, 487 Colombians have been murdered due to their links to organizing. Indepaz reported that 69 leaders have been murdered since President Ivan Duque took power on Aug. 7, 2018.

Only two days ago, this Sunday, environmentalist Hector Fabio Almario was murdered by several men who approached him in a motorcycle in the department of Meta. Almario worked in restitution processes for Campesinos moving away from crops of illicit use, a core element of the 2016 peace agreement.

The National Coordinator for Coca, Poppy, and Marijuana Growers (COCCAM) announced the murder Monday. “Yesterday the murdered our comrade and regional leader Hector Fabio Almario, president of the communal action board of Getsamani in Macarena-Meta. They inform us there are two unidentified bodies. #SubstitutionWithGuarantees @ProsecutorCol @UNHumanRights.”

Leonardo Gonzalez, a researcher and human rights advocate for Indepaz, responded in outrage. “How long will this massacre last? Today the news that in Macarena, Meta Hector Fabio Almario, president of the communal action board of Getsamani and outstanding environmental leader, was murdered.”

Last week, social leaders from the Magdaleno Medio valley launched the ‘Somos como tu’ (We’re Like You) campaign, a strategy to combat the strong stigmatization and persecution they suffer.

According to Human rights groups, lack of investigative efforts and the unwillingness of the Colombian state to recognize the existence of paramilitary groups explain the inability add to the impunity with which social leaders are killed in Colombia.