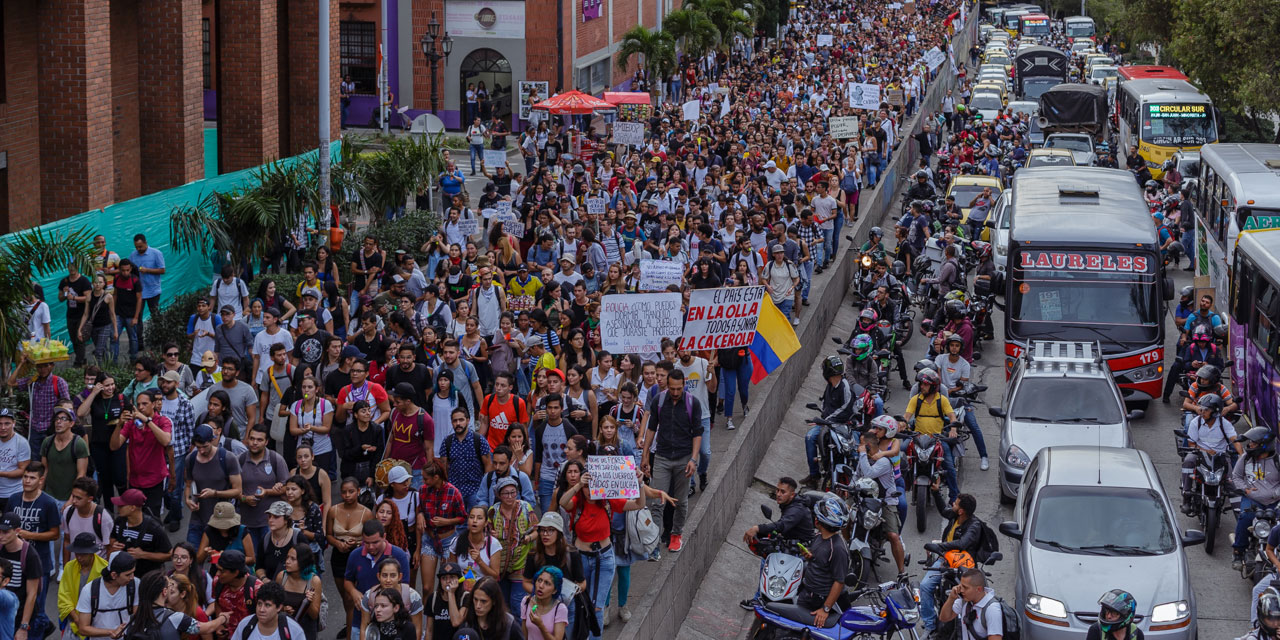 The beginning of the end of Ivan Duque.

A year after Colombia’s biggest anti-government protests in four decades, President Ivan Duque has gone from being an unpopular fraud to being accused of terrorism.

Duque and his Defense Minister Carlos Holmes Trujillo may not know it yet, but the protests marked the beginning what doesn’t only seem to be the end of them, but also of their far-right party, the Democratic Center.

The National Strike of November 21 last year also made it clear that the country’s youth will define the 2022 elections.

The Prelude to the Strike

The president and the strike organizers both deserve credit for the success of the strike. Had it not been for Duque’s mindboggling misrule, the protest organizers could never have counted on such broad public support.

The president lost public approval within four months after taking office in August 2018 by proposing a corporate tax discount that was not just rejected by economists, but by the general public.

Before the end of 2018, Duque’s approval rating had sunk from 50% to 25%, according to the average of three pollsters.

The demobilization of former guerrilla group FARC was met with skepticism in 2017, but by 2019 had slowly been slowly gaining popular support unlike the government’s efforts to undermine it.

In July of 2019, the president was expelled from one of the peace marches that had been growing bigger since earlier that year.

In October, their far-right party received a devastating beating in local elections, labor unions and indigenous organizations joined the students and peace activists and called for a national strike.

Instead of trying to appease the growing resistance against his government, Duque went into siege mode and activated anti-insurgency protocols.

The government’s panic led to hilarious situations like Duque claiming that his Venezuelan counterpart, Nicolas Maduro, was behind the protests that were endorsed by Miss Colombia, a national icon.

By then, the president had become the national laughing stock and was effectively fueling support for the protests that drew between half a million and 900,000 protesters throughout Colombia.

The so-called National Strike Committee has only planned one national strike day, but a terror campaign by the National Police in Cali on the 21st and Bogota on the 22nd backlashed and fueled even fiercer protests.

The police assassination of an unarmed protester in Bogota on November 23 escalated tensions to the point that the security forces were forced to retreat and Duque’s government coalition was about to blow.

The president had tried everything between stigmatization and terrorism. Everything failed.

Three days after the beginning of the protests, Duque himself had become a threat to his own government and announced a “National Dialogue.”

The Aftermath of the Strike

By December, the president’s approval rating had dropped to 20% between three pollsters while the vast majority of Colombians supported the protests.

By January 2020, the consequences of the Democratic Center’s election defeat became evident as critics of the president and his allegedly criminal political patron took office in all the country’s largest cities.

Fortunately for the president, the outbreak of the coronavirus pandemic spurred the National Strike Committee to suspend the resumption of another strike day on January 21 and Molano suspended talks.

Pollster Yanhaas, whose approval ratings were the most damning for Duque, stopped polling after the notoriously corrupt National Electoral Council opened an investigation in February.

Unfortunately for Duque, the president also found himself investigated on election fraud charges and media revealed evidence of Duque’s ties to a drug trafficking organization in March.

The mass death of Colombians due to the pandemic provided a welcome distraction for the president until the prosecution, the Inspector General and the Comptroller General discovered widespread fraud with coronavirus emergency funds.

When the National Police again embarked on another terror campaign and even a massacre in Bogota to quell spontaneous protests over a brutal police killing in September, a new national strike was called.

A year after Colombia’s biggest anti-government protests in decades, the president has gone from being unpopular to being implicated in terrorism and is facing the possibility of a referendum that seeks to remove him from office.

How Duque’s far-right party believes to prevent an electoral massacre in the 2022 elections without engaging in organized crime while being investigated is a mystery.