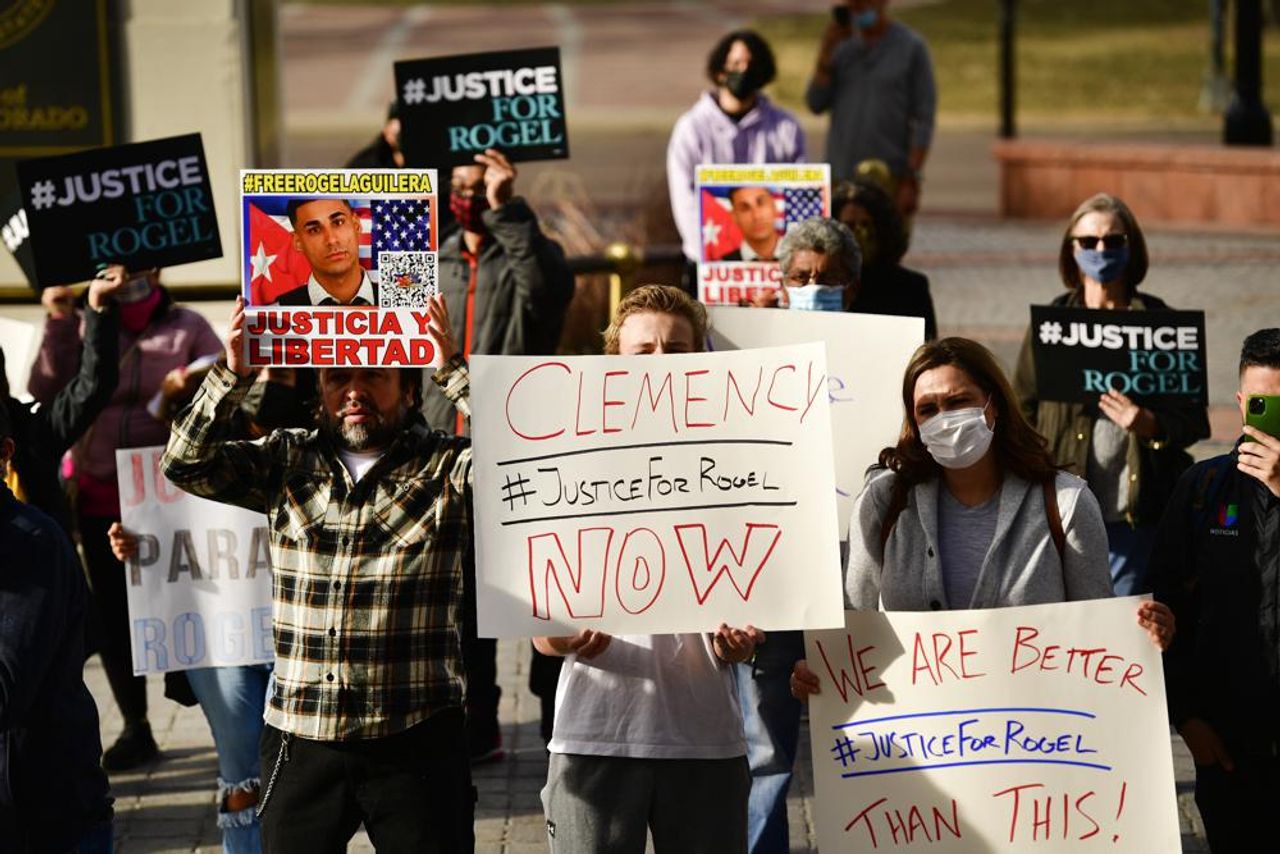 Above Photo: People hold signs in support of truck driver Rogel Aguilera-Mederos during a rally on the west steps of the state capitol Wednesday, Dec. 22, 2021 in Denver. Relatives, lawmakers and other supporters of a trucker sentenced to 110 years in prison after an explosive brake-failure accident that left four people dead rallied in Denver to plead for clemency. Helen H. Richardson / The Denver Post / AP.

While Workers Continue To Call For His Freedom.

Just over two weeks after the cruel 110-year prison sentencing of 26-year-old truck driver Rogel Aguilera-Mederos for a 2019 crash that killed four people and injured others, Colorado Governor Jared Polis announced Thursday that he was removing 100 years from Aguilera-Mederos’s sentence and reducing his sentence to 10 years.

Aguilera-Mederos, who was 23 years old at the time of the accident, was transporting lumber on Denver’s I-70 freeway when the brakes on his big rig truck failed on a downhill grade where he tried to hug the shoulder. His truck then slammed into stopped traffic that created an explosion and pileup.

Governor Polis and the state’s political establishment were forced to respond to mass economic and political pressure by a powerful movement of truck drivers, who mobilized widespread support for Aguilera-Mederos within the working class. Since the December 13 sentencing, drivers refused by the thousands to enter the state of Colorado and deliver goods and circulated the issue widely on social media.

Though little reported in the media, the powerful boycott shook the state’s economy to its core. It was also supported by a mass online petition, which has been signed by over 5 million people, calling for commutation as time served or for the granting of clemency for Aguilera-Mederos.

Additionally, the state was forced to act after the prosecutor for the case, Kayla Wildeman, came under fire for celebrating the excessive sentencing with a trophy in the form of a semi-truck brake shoe given to her by Chief Deputy District Attorney Trevor Moritzky, which Wildeman gloated about on social media. The disgusting celebration stood as a testament to the brutality of the entire criminal justice system.

Meanwhile support for Aguilera-Mederos has continued to pour in across the globe, and videos associated with the hashtag #NoTrucksToColorado have been viewed 14.9 million times. Drivers called for continued unity in action with one noting, “Truckers stand together and stand strong, we are a force to be reckoned with. The mainstream media will not give its undivided attention because they know we could bring the government to its knees if we just stand together for a cause.”

That is exactly what the drivers did.

Supporters continue to stress that the 10-year sentence still implies he is guilty of a crime, with one noting, “Those officials are still acting as if Rogel is not innocent.” And another noted, “It should be zero, and the company needs to be investigated.”

The fact that the crash was caused due to improperly functioning brakes ultimately points to the negligence of the trucking company which Aguilera-Mederos was driving for, Castellano 03 Trucking LLC, who has never been held liable for the 2019 crash. Denver’s ABC 7 reported that there were 19 vehicle inspections that resulted in 30 violations at the trucking company over the two years prior to the crash.

Many workers have also noted that such a sentence is on par with what a person receives for committing vehicular manslaughter while driving under the influence of alcohol or an illegal substance.

Aguilera-Mederos’s emotional sentencing as he begged for forgiveness and was handed the minimum of 110 years under a Colorado law by a reluctant judge, was met with widespread outrage over the injustice as well as calls for legal reforms against punitive mandatory minimum sentencing. “I was working hard for a better future for my family,” Aguilera-Mederos cried. “I was working, and I lost my brake. Truck drivers know this hard moment when you lose your brake. There’s nothing you can do. … I am begging for forgiveness. … I have never thought about hurting anybody in my entire life…”

The prosecution argued that Aguilera-Mederos was at fault because he failed to take a runaway truck ramp when he was trying to engage his emergency brake, but many drivers have come to his defense on social media, noting that the passes through these mountainous regions are difficult even for senior drivers.

Many have also called into question if Castellano 03 Trucking had provided him with the training to handle an emergency situation or if Aguilera-Mederos, who required translation services for his trial, was proficient enough in English to read the signs that marked the path to the runaway truck ramp. If true, the trucking company should be held liable to ensure drivers are well versed enough to read safety signage.

As the WSWS noted, “The plight of Aguilera-Mederos, a Cuban immigrant who was 23 at the time of the accident, has hit a deep nerve throughout the population. The majority of the working population sees in Aguilera-Mederos their coworker, their neighbor, and themselves. Despite the brutality inflicted upon immigrants daily by the US government, the vast majority of the working class wish to defend immigrants and the working poor who face immense difficulties and are often deprived of justice in the judicial system.”