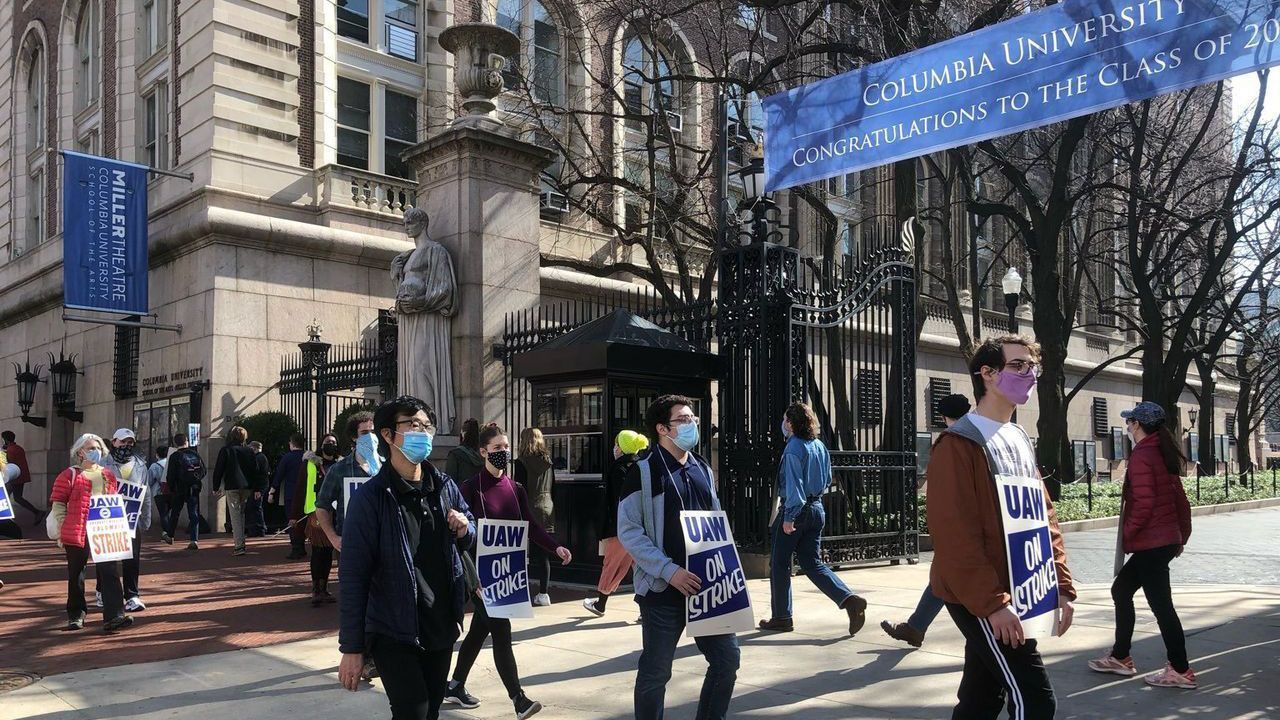 Last week saw a sharp escalation of the strike by 3,000 student workers at Columbia University in New York City, which continues in the face of strikebreaking threats by the administration. In an effort to shut down the walkout before finals, the university warned striking student workers that it might replace them in the Spring semester if they remained on strike beyond Friday, December 10.

Columbia workers rejected this attempt at economic blackmail and held out on the picket line. A poll conducted by the Student Workers of Columbia union (SWC) bargaining committee found that 87 percent of union members and nearly 77 percent of supporters of the strike wished for the strike to continue. Of those who wanted to extend the strike, 98 percent indicated that they wished to do so in direct response to the threats by the administration.

In response to Columbia’s threats to not rehire the workers, the union filed charges with the National Labor Relations Board (NLRB). The union is arguing that the strike is an unfair labor practices strike rather than an economic one. In the former type of strike, it is illegal for employers to retaliate by replacing workers.

The SWC parent union, the United Auto Workers (UAW), continues to limit strike pay to a poverty-level $275 a week, despite sitting on a massive strike fund of nearly $800 million, hoping the economic impact on striking workers will force them to accept a deal.

The escalation of the strike brought with it the intervention of the Democratic Party. On Wednesday, Democratic Congressional Representative from New York Jerry Nadler wrote a letter to Columbia University which congratulated the union and made appeals to “good faith” negotiations between the bargaining unit and the administration. Nadler’s letter was signed by several Democratic US Congressional Representatives from New York, including Democratic Socialists of America (DSA) members Jamal Bowman and Alexandria Ocasio-Cortez.

New York State Senator Robert Jackson also appeared at the picket line Wednesday to declare his support for striking student workers. The intervention by these Democrats reflects an understanding of the politically explosive situation in which the strike is unfolding. The strike, the largest in the country at present, is part of an international strike wave that emerged this fall and just as another deadly wave of the pandemic erupts.

Meanwhile, the mediation process is continuing. In mid-November, the SWC leadership agreed to bring third-party state mediator Kevin Flanigan into discussions with the university. Since then, talks have given way to concession after concession, with Flanigan continually threatening to rescind his participation should students be unwilling to budge on certain key demands.

One such demand dropped by the SWC was the provision that students working under 10-hours per week be covered by the university’s health insurance plan, amounting to several millions of dollars saved by the university. The initial demand of a $26 per hour wage was reduced to $24. Current wage increases being discussed amount to a paltry 3 percent yearly over the course of what could be a 5-year agreement.

To put this in perspective, inflation rose to 6.8 percent last month, increasing at a rate not seen since the 1980s. Food prices have surged by 6 percent, while the cost of used automobiles has jumped by 31 percent. Accounting for this inflation, the SWC and the university are now essentially negotiating over how large a pay cut student workers will receive.

Columbia acknowledged in a letter Friday that the strike has caused a major disruption at the school. In many cases it is not possible to award students a grade outside of pass or fail for their classes. In other cases, students will simply receive a temporary mark of “Credit Pending,” with coursework continuing beyond the semester.

Faced with their failure to browbeat student workers into ending their strike, the deans of Columbia’s four undergraduate schools are currently working on further contingency plans in the event the strike extends throughout finals and the grading period.

The Columbia University administration consists of the staunchest representatives of American capitalism. Its president, Lee Bollinger, makes over $1 million annually, while the university board is composed of leading officials from the corporate, military, and state apparatuses.

Students opposing low wages and living standards not only confront their employers but the entire financial system. In order to win their demands, strikers at Columbia must expand their action to other universities and industries across the city, country, and the world. The primary obstacle to such a mobilization of graduate student workers, however, has been the strike leadership itself, the UAW, as well as the AFL-CIO bureaucracy more broadly.

Whether organizing student workers in prestigious American universities or factory workers in manufacturing plants across the Midwest, the American labor apparatus is thoroughly hostile to any action which threatens profit interests that make its privileged position possible.

In 2021, the union oversaw the betrayal of struggles by 3,000 employees at Volvo Trucks in Dublin, Virginia, 10,000 John Deere workers across the country, and more than 3,500 workers at Dana automotive as they sought to win back decades of concessions. In each of these cases, the union bureaucracy resorted to lies, manipulation, and threats to bully workers into accepting contracts that similarly failed to meet even a basic increase in real wages. Workers formed rank-and-file committees to coordinate and develop their opposition to sellout contracts independently of the union.

Struggling students at Columbia must turn away from the corrupt trade union bureaucracy and instead turn toward the organization of an independent rank-and-file committee. The International Workers Alliance of Rank-and-File Committees (IWA-RFC) is a network of workers’ organizations that are completely independent of the trade unions and seek to unite workers in all industries internationally against attacks on jobs, wages, and living standards. Rank-and-file committees are united in the view that there is no shared, “common interest” between the profits of big businesses and the working class. The World Socialist Web Site will provide full assistance to Columbia strikers interested in forming such a committee. Contact us today.