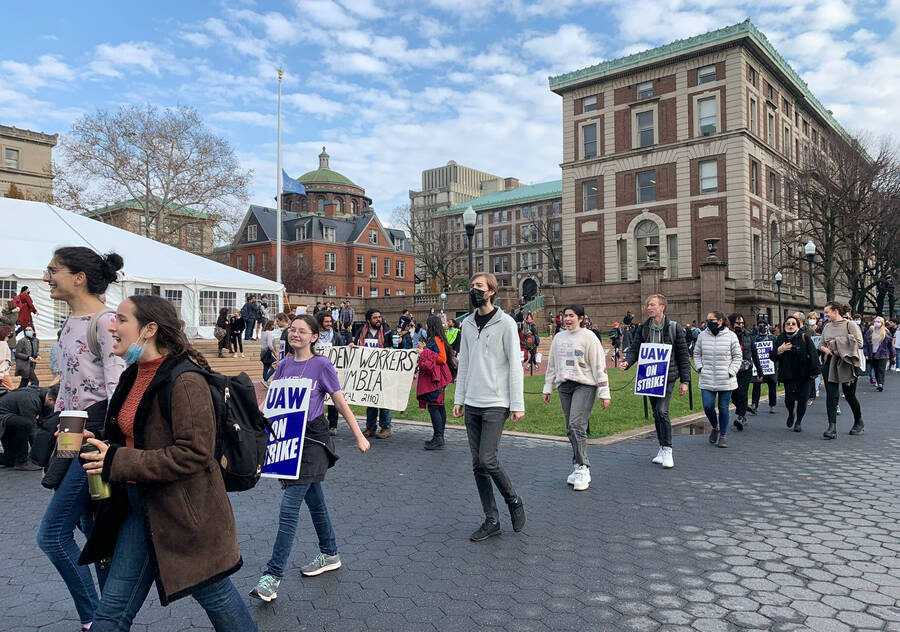 A Dispute Over Whether The University Can Permanently Replace Striking Student Workers Is Coming To A Head This Week.

New York City – Thousands of striking Columbia University graduate student workers are vowing to “shut down” the campus Wednesday with a major picket line aimed at highlighting the university’s threat to fire those who are still on strike by December 10. In a year marked by labor strikes, one of the largest and most contentious is happening at one of the most elite bastions of American higher education.

The 3,000 members of the Student Workers of Columbia, members of UAW Local 2110, have been on strike since early November, seeking a livable wage, improved health and dental benefits, and stronger protections from sexual harassment and discrimination. The union and the school have been in mediation for weeks now, and the ongoing contract negotiations stretch back long before that — a tentative agreement was reached in April, but rejected by union members in May.

Now, the brinkmanship has heightened. Late last week, Columbia Vice President of Human Resources Dan Driscoll emailed all of the student workers telling them that only strikers who returned to work by December 10 would be assured of work assignments for the spring term. (The email also said that “striking student officers who return to work after December 10, 2021 will be appointed/ assigned to suitable positions if available.”) To the union, this was a clear threat to permanently replace striking workers — and an illegal one.

The dispute over whether the university can legally hire permanent replacements for the strikers centers on competing visions of what type of strike is happening. The union says that it is out on an unfair labor practice (ULP) strike, in which case it would be illegal to permanently replace strikers. The university, meanwhile, holds that the workers are out on an economic strike, in which case replacing them would be legal.

“We are on a ULP strike. We’ve filed several ULPs,” says Johannah King-Slutzky, a union member involved in negotiations. In fact, she says, the charges the union has filed mean that they are, in essence, on both a ULP and an economic strike at once.

The university disagrees, writing on their website: “We are in the midst of a first contract strike, which is legally akin to an economic strike. The union contends that it is an ‘unfair labor practice’ strike, because it has filed two unfair labor practice charges, which we believe lack merit.” It is perhaps appropriate, in a grim way, that the outcome of this strike in academia may come down to an academic dispute over the definition of various labor law terms.

For the striking student workers, however, the consequences are very real. King-Slutzky points out that if the university does not hire the strikers for the spring term, the damage to their careers will be done, even if the union were to later win a favorable ruling from the National Labor Relations Board. “In academia that’s especially problematic, because this is a job in which we’re only here for a select amount of time,” she says. She also fears that foreign student workers who are on strike would be forced to leave the country and return home — despite the university’s assurances to the contrary — simply because they are barred from working anywhere else. “You have to look at how this will actually affect people without financial resources,” she says.

It is unclear exactly how fast the NLRB could rule on a dispute if Columbia does, in fact, permanently replace the strikers. New NLRB general counsel Jennifer Abruzzo released a memo in August emphasizing the need to rule quickly on such cases in order to mitigate possible harm to workers, but it is impossible to know how the timeline would play out in the context of scheduling for an academic semester. One practical matter working in the union’s favor: It may not be easy to find enough scabs who are qualified to jump in and teach such a wide array of specialized classes on such short notice.

The underlying reason for the strike, according to King-Slutzky, is the university’s lack of meaningful movement at the bargaining table. The student workers want a wage that is livable in New York City, and the school “did not even come close to meeting that mark” in its latest proposals, she says. Mediation continues this week, but with the term ending soon and finals looming, the student workers are not the only ones under pressure. The union hopes to enlist students and parents, angry at the prospect of missing so much class time as the strike drags on, to apply pressure to the school. With a tuition of more than $60,000 per year, Columbia certainly feels compelled to show parents it is delivering something of value, even in the midst of a labor dispute.

As the end of the semester approaches and negotiations morph into a high stakes game of chicken, the union remains confident that it will not blink first. “I don’t think a lot of people are going to be persuaded by this threat [to permanently replace the strikers],” King-Slutzky says. “But the risk alone is frightening.”