Above Photo: Local supporters rally for the Black Pride 4 on the eve of their sentencing, part of a national day of action. (Credit: Prince Shakur)

The Black Pride 4 — Wriply Bennet, Ashton Braxton, Deandre Miles-Hercules, and Kendall Denton — and six other activists blocked the path of the parade for seven minutes last June “to protest the acquittal of Jeronimo Yanez, the Minnesota police officer who killed Philando Castile in 2016, as well as to shed light on the lack of safe spaces for black and brown people in the LGBTQIA+ community,” according to their press release.

Constance Gadell-Newton, the attorney who represents Bennet, said that’s not the result she hoped for. “Although there was no jail time imposed immediately, probation is very burdensome,” she told In Justice Today after the sentencing. “There is always the potential of future jail time that could come out of that, so I was very disappointed.”

The day before the sentencing, a crowd of over 100 people gathered for the “Columbus Is Guilty” rally and march at Columbus City Hall. The action, which was organized by Black Queer and Intersectional Columbus, was meant “to show solidarity with the #BlackPride4 and continue to shame CPD [the Columbus police department] and Stonewall [the group that organizes the annual pride parade] for their blatant disregard for Black lives.” 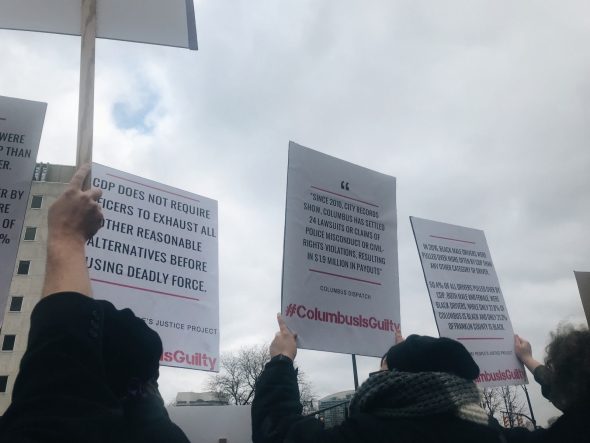 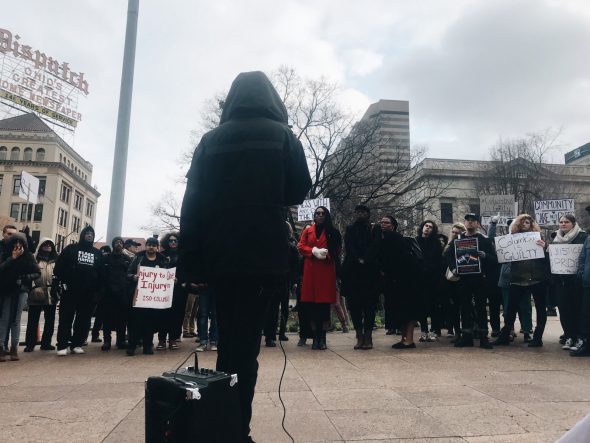 “We’re dealing with an increasingly hostile [Trump] administration. We’re seeing what that looks like for us here on the ground,” said Aaryn Lang, movement building and campaign manager for national LGBT organization GetEQUAL, who helped organize the national day of solidarity. “They’re trying to make an example out of [the] Black Pride 4 and I hope you all are paying attention.”

After being arrested at the June parade, the protesters — all of whom are people of color and two of whom identify as transgender — faced a range of charges including disorderly conduct and resisting arrest, and were held for several hours before being booked by Franklin County. Bennet said she was misgendered by Columbus police officers, placed in a men’s facility, and kept in solitary confinement during her day in jail. Miles-Hercules’s bail was initially set at $100,000 as they, who has not yet been indicted, could face more serious charges, including aggravated robbery, for allegedly attempting to take an officer’s weapon.

After bail was posted for all four protesters with the help of online fundraisers, the eight-month journey to trial began. On February 12, three of the four arrestees — Bennet, Braxton, and Denton — were found guilty of six out of eight charges by a mostly white jury after a five-day trial.

Meanwhile, community organizers have led efforts to support the the protesters, hosting marches and petitions drops and disrupting a community conversation set up by Stonewall Columbus about the arrests to call out the organization for not fulfilling its promise to support the Black Pride 4.

Lori Gum, former program director for Stonewall Columbus, resigned just days after the protest, citing the organization’s lack of effort to help the arrested protesters. Gum joined Stonewall Columbus in 2011 and created the “InsideOUT” program to help incarcerated people start their own LGBTQ support groups. She told In Justice Today that the connection between mass incarceration and the LGBTQ was something that Stonewall Columbus “didn’t even know about.”

Stonewall Columbus did not respond to requests for comment for this story.

“I watched to see how the community and Stonewall handled this, and it was handled horribly,” Gum noted, “So it makes me afraid truly of where this city is going with … racial relations, but particularly people of color and [their] relations with CPD.”

“Two white women cackling – one of them spit on me.” This is what happened when a black trans activist was arrested at an Ohio Pride parade. pic.twitter.com/qsGL9nt8tF

Mike Brickner, senior policy director of ACLU of Ohio, said this isn’t the first time people of color in Ohio were treated unfairly by police officers for expressing dissent. In 2015, his organization filed a lawsuit against the city of Cleveland over protests stemming from a different police brutality case.

“Oftentimes, they [people of color] encounter more obstacles when trying to protest in public spaces, when organizing. We have to have a recognition from the very beginning that racial justice and free speech have a clear intersection here.”

Folks in Brooklyn NYC rallying in solidarity with the #BlackPride4 right now. Saying the names of trans folks who have died followed by #TransLivesMatter. #FreeTheBlackPride4 pic.twitter.com/YLPmhAHoRQ

The trial against the Black Pride 4 comes amid criticisms of the Columbus Division of Police for using excessive force, particularly against people of color. Between January 2013 and December 2017, the Columbus police killed 28 people, 21 of whom were Black, and over two dozen lawsuits are currently filed against the department, many claiming civil rights violations.

Recent high-profiles deaths of Black residents at the hands of the police include Tyre King and Henry Green. King, a 13-year-old, was killed by a Columbus police officer while he reportedly had a BB gun and was running away. Green, 23, was shot seven times by two plainclothes Columbus police officers and then handcuffed.

Officer Zachary Rosen, who was involved in Green’s death, reportedly had a history of aggressive behavior and was fired in 2017 after video surfaced of him stomping on the head of a handcuffed man. Earlier this month, Rosen was reinstated to the police department, a decision that prompted community members to post flyers warning of Rosen’s “suspicious behavior” as an officer. Additionally, video of Columbus police officers tasering a pregnant woman in a jail cell prompted a rebuke by the United Nations special rapporteur on torture, who called such incidents “grave abuse.”

The office of Police Chief Kim Jacobs did not respond to requests for comment on the Black Pride 4 by press time. But previous interviews with Jacobs shed light on her leadership style. Jacobs spoke about working for the department’s complaint line, for instance, saying it taught her that most people who called in to file complaints “think [an officer’s actions] might be wrong, and they need clarification.” When asked about community distrust of the police, Chief Jacobs recommended that residents should simply comply with officer commands.

“When you fight us, first of all, you’re committing a crime, and if it turns into an assault, you’re committing a felony,” she told Columbus Alive in 2016, “It’s much easier to just go along with the program and then use the justice system to resolve issues that you have.”

But Dkeama Alexis, co-founder of BQIC, says “going along” with the police hasn’t worked for them and other activists. “Organizing for the #BlackPride4 showed me that you can grind nonstop for months trying to get justice,” Alexis said, “but that the criminal injustice system is so much of a ruthless machine, that you can still lose.”

Prior to the parade, Stonewall Columbus was on “high alert” following the Pulse nightclub shooting in Orlando, Florida and an anti-gay post on Facebook by a Columbus City School District employee who said he wished the 2017 parade would turn out like the “Boston Marathon.” As a result, roughly $25,000 was spent on special duty officers, private security, and undercover officers for the pride event. Deputy Chief Michael Woods noted just two days before the June 17 pride parade that the extra officers would be on the lookout for “strange behavior.”

After the arrests of the Black Pride 4, community members called on Columbus City Attorney Zach Klein to drop the charges against the four activists, since prosecutors have full discretion to pursue or drop such charges.

But Deputy Chief Prosecutor Joseph Gibson told In Justice Today his office had public safety in mind, particularly after the Pulse nightclub shooting. “This wasn’t an ideological prosecution,” he said. “It was a prosecution where laws were broken and police filed the charges and we prosecuted them without regard to the message.”

In the wake of Tuesday’s sentencing, one of the Black Pride 4, Kendall Denton, was clear about the need for continued community support.“We got one more [who hasn’t faced trial],” Denton said. “We have to make sure that the support that came out for us, comes out for Deandre as well.”