Columbus And The Legacy Of Genocide

Above Photo and below: From CreativeResistance.org. Mother Earth: Tree of Life.

This article was originally published on October 10, 2015.

Note: Our weekly newsletter examines the ‘US Way of War’ from Columbus to Kunduz and asks What is War Culture Good For? Part of war culture is celebrating people like Columbus. It needs to end. One disagreement with this article, it focuses on President Bush as an example of Columbus-like wars, in fact, the ‘US Way of War’ is built on the Columbus method of killing civilians of all ages, denying them food and medicine (or worse spreading disease), essentially all out war. It has existed throughout US history and it is something the nation must face in order to end it. KZ 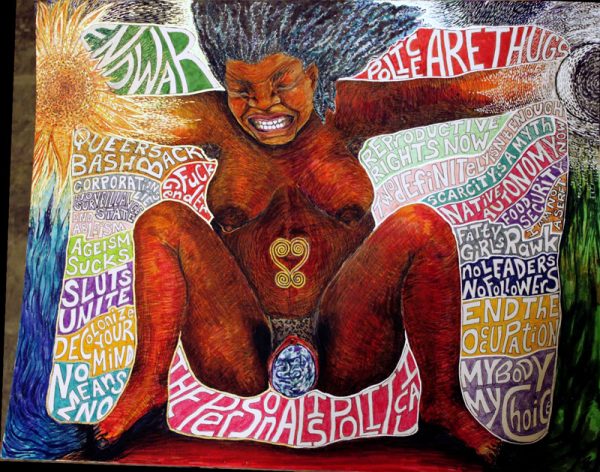 October 12th is Columbus Day, a day which is increasingly coming under criticism for celebrating a genocidal pirate, murderer, rapist, and enslaver who is credited with the “discovery” of the Western Hemisphere.

Most people today dismiss the notion that Columbus “discovered” a land that was already packed with 100 million people and 6,000 years of thriving civilizations (the earliest urban center with communal architecture is at Porvenir, Peru, dating back to 4930 B.C., according to Haas et al, 2004).

The world that Europeans “encountered” (read: “invaded”) was not that of a barren wilderness, sparsely populated by nomadic tribes; but a continent filled with wealthy, urban civilizations and complex, sedentary farming cultures. The Western Hemisphere of 1492 was a land of cities, writing, mathematics, astronomy, calendars, and engineering (listen to the Charles Mann interview for more information).

Unknown to most people is the enormity of Columbus’ genocidal actions, as well as its deadly legacy lasting into modern times. Genocide expert David Stannard has asserted that, beginning in 1492 with Columbus,  Europeans collectively killed between 70 million to 100 million Indigenous People (within 80 years). In his book American Holocaust, Stannard calls this “the largest ongoing holocaust in the history of humanity.” The consequences of this Indigenous Holocaust were world-changing: 95% of Indigenous People were killed by European actions, 100% of Indigenous lands were stolen, and European-descent people became the most prosperous people on the planet.

Spain was the perfect place for pirate and slave-trader Christopher Columbus to go as he looked for financial backing for further naval exploitations. In 1492, Spain was an environment hot with the fervor of Holy Wars against Muslims and the expulsions of Jews out of Spain.

The genocidal actions of Columbus and other Europeans who followed in his footsteps (e.g. Cortes, DeSoto, Pizarro, et al) can be classified into two general categories:

Cultural genocide: the deliberate destruction of books, buildings, and other cultural assets for the purpose of undermining cultural identity, development, and self-determination.

It was the Catholic Church which established a “Genocide By Law” tradition through the issuing of Papal Bulls (Christian Declarations), granting European-Christians the rights to invade, enslave, and plunder the lands of non-Christians.

This tradition of Church-sanctioned crime led to the Doctrine of Discovery, which stated that Europeans have the right to invade, steal, rape, enslave, and colonize worldwide people and lands in the name of Jesus Christ and “salvation”. This doctrine was perhaps nowhere more blatant than in the Spanish-colonial tradition of reading aloud document called The Requirement, just before invading Indigenous lands. An excerpt from The Requirement is as follows:

“But if you do not do this, and maliciously make delay in it, I certify to you that, with the help of God, we shall powerfully enter into your country, and shall make war against you in all ways and manners that we can, and shall subject you to the yoke and obedience of the Church and of their highnesses; we shall take you, and your wives, and your children, and shall make slaves of them, and as such shall sell and dispose of them as their highnesses may command; and we shall take away your goods, and shall do you all the mischief and damage that we can, as to vassals who do not obey, and refuse to receive their lord, and resist and contradict him: and we protest that the deaths and losses which shall accrue from this are your fault, and not that of their highnesses, or ours, nor of these cavaliers who come with us “.source: https://en.wikipedia.org/…

Other legal methods of codifying destruction and subordination were:The 1577 Law of Book Burning – this Spanish law demanded the burning of all Indigenous books.

Encomienda system (slavery) – this slave system granted entire Indigenous communities over to Spaniards who could work them to death, rape them, and otherwise act with impunity.

Reservation/Reserves – mainly practiced in “The United States” and Canada, this practice herded Indigenous People – like animals — onto barren, unwanted lands.

Much of this may sound familiar in our age of “The Bush Doctrine”, whereby American foreign policy is based on “pre-emptive war” (invasion) in the name of  “Democracy” and ‘Freedom”. Just as the American government is a direct descendant of European Colonial governments, so too is modern American foreign policy a direct descendant of European-Colonial “Indian Policy”.

Modern Legacy of Genocide Since 1492

Columbus Day is more than just a holiday celebrating a man who merely “mistreated the natives”. “Mistreatment”, “depopulation”, and other euphemisms for genocide, torture, rape, and enslavement do an injustice to the horror story that is The Columbus Genocide Legacy. Columbus Day honors the architect of 521 years of continuous genocidal actions against Indigenous People.

To criticize Columbus Day merely on the notion that he did not “discover” an already-inhabited hemisphere is inadequate. The real significance of Columbus Day lies in the fact he established the Indigenous Holocaust Formula, leading to the extermination of 70 million to 100 Million Indigenous People and the theft of Indigenous lands.

This genocide paved the way for Europeans to acquire lands for “free”. The enormous wealth of the Western Hemisphere transformed Europe into a wealthy continent, and provided white settlers with “opportunities” which they would not have otherwise found back inside Europe.

Today, “Corporate Conquistadors” continue to plunder the world on behalf of “The West” (European-descent people), plundering natural resources from those who need them the most, and imposing poverty-producing conditions on struggling economies.

The cultural genocide continues today as well. A current proposal is underway to construct a “Museum of the American Latino” which plans to glorify Spaniards and their colonial past, while subsuming Indigenous-descent people under the categories of Hispanic/Latino, as a way of erasing their identity and voices.

In the words of Noam Chomsky, “The conquest continues”.

The Journals of Columbus

Destruction of the Indies

Kill The Indian, Save The Man

American Indian Contributions to the World

1491: New Revelations on the Americas

Pagans In The Promised Land: Decoding The Doctrine of Discovery