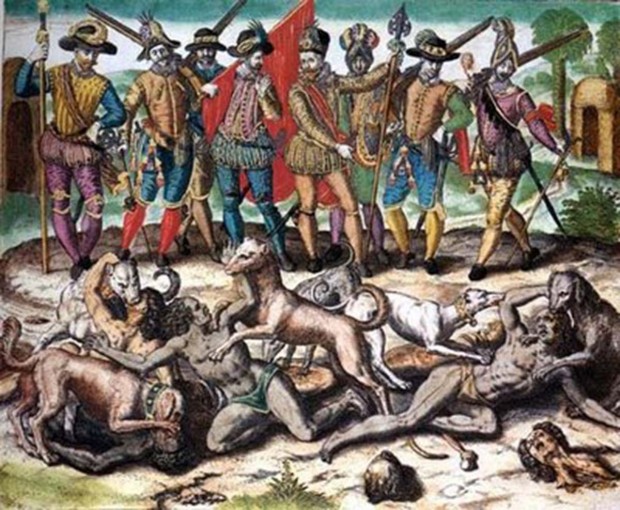 Above: Columbus and the Spanish conquistidors fed live Indigenous peoples to their dogs.

The US Should Not Be Celebrating the Legacy of Columbus: Slave Trade, Sex Trade, Ethnic Cleansing, Genocide, Mass Slaughter, Rape, War Crimes, Mutilation and Carnage

1. He cut off the hands of roughly 10,000 Natives in Haiti and the Dominican Republic. Columbus mandated every indigenous Taino over the age of 14 provide him with a “hawk’s bell” of gold every three months. Those who failed to meet orders were “punished by having their hands cut off” and were “left to bleed to death,” Columbus’s son Fernando reported.

dogs … were turned loose and immediately tore the Indians apart,” wrote Spanish historian and Catholic priest Bartolome de las Casas, who witnessed much of the carnage.

4. Columbus and his crew hunted Natives for sport and used their bodies for dog food. If their dogs grew hungry, “Arawak babies were killed for dog food,” Bartolome de las Casas reported.

5. Columbus spearheaded the transatlantic slave trade. When he essentially massacred a whole race in Haiti and the Dominican Republic, he began enlisting Natives from other islands. He would also ship these people to Europe as slaves. When so many of these people died on the journey, the Spanish turned to Africa for slaves. Columbus’ son carried out the first Africa-to-Caribbean slave trade in 1505.

6. Columbus encouraged his men to rape Native women as young as 9 or 10.

In one particular documented example, Columbus shipmate Miguel Cuneo took a teenage “Caribbean girl as a gift from Columbus” when they embarked back to Spain. She “resisted with all her strength” his attempts to have sex with her, so he “thrashed her mercilessly and raped her.”

7. Columbus ordered his men “to cut off the legs of children who ran from them (in order) to test the sharpness of their blades,” according to Bartolome de las Casas. The invaders also reportedly “roasted” children “on spits,” and  “hack(ed) the … children into pieces.”

References: Phillymag.com,Washington Post,University of North Carolina, American holocaust: Columbus and the conquest of the New World,Columbus: debunking of a legend

RELATED:Myths and Atrocities About Columbus