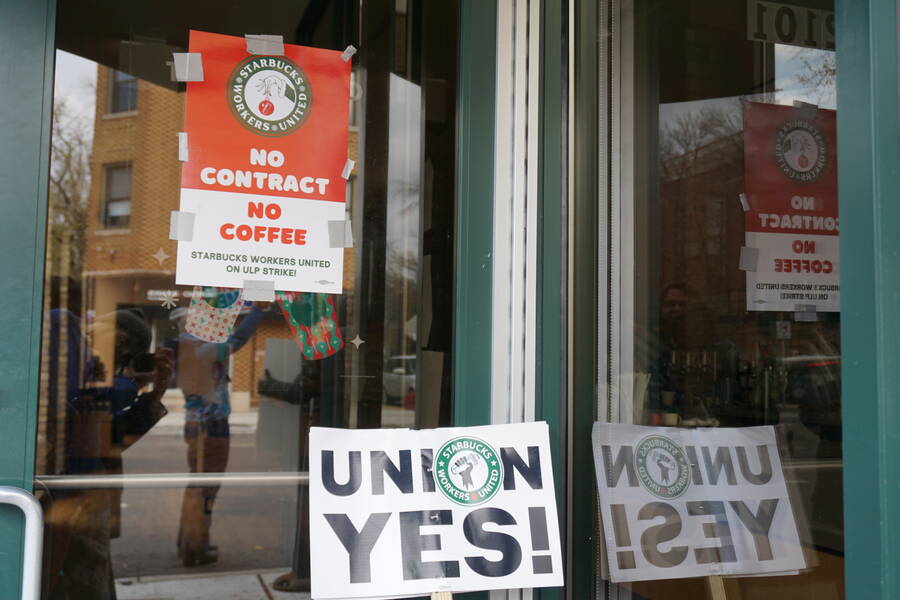 “Come To The Table, Cowards.”

We spoke to strikers in Boston, New York, Chicago, and Pittsburgh about their fight to bring the multi-billion dollar company to the bargaining table.

On Thursday morning, thousands of Starbucks workers across the country rose at the crack of dawn — some braving bitter cold — to set up picket lines outside their stores. Over 100 Starbucks locations participated in what workers were calling the “Red Cup Rebellion” — a nationwide walkout planned by Starbucks Workers United (SBWU), the union that represents nearly 7,000 Starbucks workers across the United States. Workers who spoke to In These Times said they hoped the day of action would finally convince Starbucks to negotiate in good faith instead of doubling down on retaliation, intimidation and union busting.

The strike was strategically timed. Starbucks’ annual Red Cup Day is a late fall tradition where customers can get certain beverages in reusable, limited-edition holiday cups. The marketing muscle that goes into Red Cup Day and the popularity of the cups makes it one of the company’s busiest and most lucrative days in a year. “We would probably make between $8,000 and $9,000 just at this store [on Red Cup Day]. So they’re losing a lot of money from all these stores being shut down,” said Nicole Deming, who has worked at the Starbucks store in Chicago’s Bucktown since January. “It’s really a great way of saying we hold the power and your profits come from us.”

Red Cup Rebellion shuts down a day that workers normally find “tedious and stressful,” according to Aaron Cirillo, a barista who has worked for Starbucks for a year and a half and is now at a new Starbucks location that is attached to an Amazon Go market near New York’s Times Square. “We all hate Red Cup Day,” echoed Kylah Clay, a barista at New England’s first-ever unionized Starbucks store in Boston’s Allston neighborhood. “Customers are coming in nonstop and we are always understaffed,” Clay told In These Times. Reed Essex, a barista at the Bucktown location, said workers did not receive overtime pay on Red Cup Day despite the extra work expected of them. Starbucks’ press department did not respond to a request for comment by press time.

Poor working conditions on Red Cup Day only magnify many of the issues that Starbucks workers face throughout the year. Hal Battjes, a barista who works alongside Cirillo at the Times Square location, said that many of their colleagues have visible burn scars from working in a cramped and dangerous hot foods section — work they are expected to do without additional pay. Battjes and Cirillo told In These Times that in addition to their regular jobs, workers are also expected to do “laborious” and “time-consuming” inventory and stocking work for Amazon, also without additional pay. Battjes’s time working at Starbucks has left them with health problems such as carpal tunnel, but Starbucks insurance takes so much out of their paycheck that they can no longer afford to see a doctor.

Underlying these individual workplace grievances is anger that Starbucks has refused to bargain in good faith with unionized workers. SBWU successfully unionized its first store in Buffalo, N.Y. in December 2021. Since then, more than 6,500 workers at over 250 stores have joined SBWU. For months, Starbucks has dragged its feet when it came to negotiating a contract with these workers. As of August, the company had initiated contract negotiations with only three of its more than 200 unionized stores. In October, the company agreed to negotiate with additional workers at locations in New York, Michigan, Illinois, Kentucky and California, but negotiations collapsed when Starbucks representatives walked out of five separate bargaining sessions on October 24.

Workers at other Starbucks locations have had similarly disappointing bargaining experiences. At Deming’s store in Chicago, workers came to a scheduled bargaining session on October 26 and waited for over six hours, but no one from Starbucks management showed up. The company failed to reschedule, leaving workers wondering if the meeting will happen next spring or not at all. At a Starbucks location in Pittsburgh, shift supervisor Jake Welsh said that after a round of introductions, Starbucks management left a bargaining session to “caucus” and never returned. The company has supplemented its bad faith bargaining efforts with a systematic anti-union campaign, with tactics including withholding raises from unionized workers, dismissing pro-union employees, cutting workers’ hours, and disciplining union organizers for petty offenses. With this nationwide strike, workers are hoping to pressure Starbucks into negotiating in good faith instead of engaging in often-illegal union busting.

Red Cup Day is often chaotic, and this year was no different; one photo of a Starbucks counter filled with abandoned orders — made so late customers gave up and left — quickly spread on social media. The strike has only magnified the disruption. At the Times Square location, practically no one came in to work, Battjes said, “because we were all striking and nobody wanted to come to our store and work for such a low wage.” The store remained closed for two to three hours on Thursday morning, but Starbucks management eventually managed to scrape together enough district and store managers from the surrounding area to open the store in time for the 8 a.m. rush. “It felt really good to finally see our district managers pulling some weight,” Battjes said. “Some of those store managers are … making a damn latte for probably the first time in their life. It feels good to know that they had to do the stuff we do every single day.”

To prevent the company from strike-breaking, SBWU kept the plan for the action under wraps for months. Welsh, who is a member of SBWU’s National Bargaining Committee, emphasized how hard it was to keep the news of the planned action from reaching management before the morning of November 17. Plans for the strike had been mentioned in mass communications involving thousands of workers, he said, adding: “All it takes is one person who accidentally says something to a manager.” Organizers were careful when discussing strike plans. Clay said she first started talking to fellow workers about the action in May, but preparations only began in earnest two months ago. The union has a National Contract Action Team composed of workers from multiple stores who are in charge of planning direct actions to pressure Starbucks to negotiate a contract. This team helped compile social media materials and prepare individual stores participating in Thursday’s strike.

Workers told In These Times that pressuring Starbucks through disruption was only one of the goals of the strike. “One of the best parts about going on strike is getting to talk to your customers and finally be frank about your working conditions,” said Clay, adding that the Red Cup Rebellion was a strategic success for exactly that reason. “By having one on one conversations on the busiest day of the year, we can make more of a dent, and help show [customers] what our fight is all about.” Customers’ response to the strike, organizers agreed, has largely been positive. “The customers … are incredibly understanding,” Battjes told In These Times. “They see the hard work that we do, and they recognize that we really don’t get paid enough.” Like community members who offered warm wishes and pizza, the Democratic Socialists of America in Chicago and New York also showed strikers some love by coming out to the picket lines and amplifying the action on social media.

On the picket lines, workers held signs and shared laughs, hugs, and snacks. “I’ve been here since 5:45 a.m.,” Battjes said at the Times Square picket. “I feel like it’s the coldest day of the entire week. My voice is just about to give out. But so many people have come to support us. It’s been great to see.”

That fight won’t be over soon though, said Essex. “I’ll continue to say it [to Starbucks]: ‘Come to the table, cowards.’”