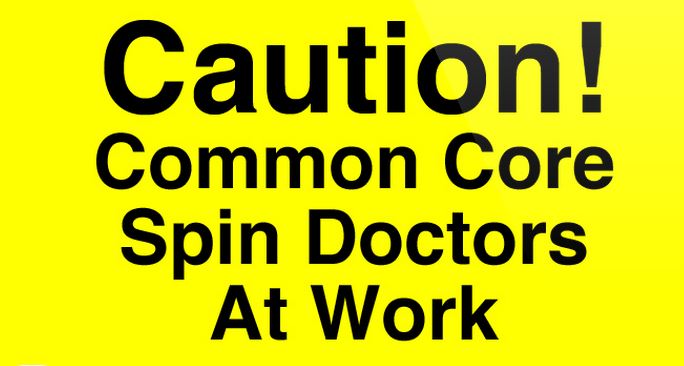 This week we have seen a renewed attempt to rehabilitate the beleaguered Common Core standards, just as the scores arrive in many states, largely meeting projections that they would yield increased failure rates and a wider “achievement gap.” These results are the most basic problem that the Common Core has. These standards were designed to deliver massive failure, and the tests are delivering as promised. But rather than question these results, some advocates are trying to shift the focus onto a brighter view.

The headline from Think Progress is beyond belief. “People Like Common Core Better Once They Know What It Is.” But when you read the article, you discover that support for Common Core is actually continuing to drop. One would think that teachers are in a position to know far more than the general public about the Common Core, but Quinlan notes that:

Teacher support of Common Core has slipped from 76 percent in 2013 to 40 percent this year, according to the Education Next and Harvard Kennedy School poll.

How does this jibe with the headline stating that people like Common Core better the more they know about it? I would think teachers know more about the Common Core than anyone.

The public should be forgiven for the mistaken belief that the US Department of Education created the Common Core. After all, “career and college-ready standards” (largely interpreted to mean Common Core) were required by the DoEd for Race to the Top funds and for NCLB waivers that states needed to continue receiving federal funds. Law prevented the Department of Education from creating the Common Core, but Arne Duncan and Bill Gates created a workaround. Gates provided the funding, directed to nonprofit organizations, the National Governor’s Association (NGA) and Chief Council of State School Officers (CCSSO). If you think this is some sort of conspiracy theory, you can read Gates’ own explanation here. (And if you want the nitty gritty history, there is no better source than Mercedes Schneider’s new book, The Common Core Dilemma.)

The statement that “teachers were involved in the creation of Common Core” is like saying that the seamstress who hems your trousers was involved in making your suit. In reality, the Common Core was originally drafted behind closed doors by a small group of people that included only one teacher. The following year some teachers were involved in an editing and feedback process, but the original draft included virtually no teacher input. I know, because I was watching when the press release came from the NGA and CCSSO. At the time these folks seemed almost proud of the fact that the work was being done in secret. The press release stated:

“The Work Group’s deliberations will be confidential throughout the process.”

The San Francisco Chronicle stated at the time that this secrecy was:

… a wise decision. A truly open process would result in the experts being lobbied by countless interest groups, and – given the still-controversial nature of national standards – it could torpedo the plan altogether.

You know, those pesky interest groups, like teachers, students and parents.

The poll also showed that 72 percent of voters thought test-taking took more time than it actually does. Only 1.6 percent or less of a student’s instructional time was spent on tests on average, according to a Center for American Progress report.

The public thinks that test-taking takes more time because the tests have come to dominate every aspect of school life. Because of the high stakes attached to Common Core tests, schools live or die, and teacher evaluations – even their jobs – depend on the results. There are district tests, benchmark tests, and practice tests. So while the Common Core tests themselves take a relatively small percentage of the whole school year, this is not a good indicator of their impact. Once again the public is not fooled.

While there is such frantic soft peddling going on, it is useful to go back a few years and see what the Common Core sponsors and architects were saying before they knew the public was listening. There is an old saying that you cannot un-ring a bell, and these statements continue to reverberate in the public consciousness.

Identifying Common Standards is just the starting point. We’ll only know if this effort has succeeded, when the curriculum and the tests are aligned to these standards.

And the man termed the “architect” of the Common Core,  David Coleman, said in 2011:

There is no amount of hand-waving, there’s no amount of saying, “They  teach to the standards, not the test; we don’t do that here.” Whatever. The truth is…teachers do. Tests exert an enormous effect on instructional practice,  direct and indirect, and it’s hence our obligation to make tests that are worthy of  that kind of attention.

So when you hear someone tell you that the Common Core is “just standards,” you know they are engaging in doubletalk. And it is this sort of doubletalk that has wrecked the credibility of everyone willing to carry water for the Common Core.

… the Common Core name has become increasingly less popular over the past few years. Another poll released Tuesday by Education Next and the Program on Education Policy and Government at the Harvard Kennedy School, shows that support for “Common Core” itself is continuing to fall, with 49 percent seeing it favorably this year compared to 53 percent last year and 65 percent in 2013.

According to an interview with The Advocate, editor in chief of Education Next Paul Peterson said opinions on the standards are likely “stabilizing,” since support fell more dramatically last year.

If your bank account dropped by 12% last year and another 4% this year, would you feel as if your situation was “stabilizing”? And just so we are clear on sources here, Education Next is a publication which lists as its prominent supporters the Hoover Institution and the Thomas B Fordham Institute. It exists to promote corporate reform.Some bastion of “progressive” thought. The credibility of organizations like the Center for American Progress and Think Progress suffer when they publish this sort of propaganda.

The very real problem that this propaganda is attempting to distract us from is that we are seeing a huge drop in student test scores as a result of the new, “more rigorous” tests.

It’s the same story for higher grades. Fifty-nine percent of eighth graders passed the AIMS math test vs. 33% on AZMerit.

But the spin doctors went to work in this area as well. The New York Post headline reads “NYC students score slightly higher on state tests for second year.“ The article soft-pedals the results, by comparing this year’s scores to last year’s debacle::

The city’s black and Hispanic students made slight gains in 2015, but the achievement gap faced by those kids worsened as they failed to keep up with citywide improvements.

Only 4.4 percent of all English language learners and 5.7 percent of students with disabilities were proficient in English Language Arts, and their math proficiency gains were respectively 0.6 percent and 1 percent. Economically disadvantaged students’ proficiency rates were not part of the released results

Here in California, where about one sixth of the nation’s students attend school, we have been told that we must wait for September to get the test results. Never mind that these tests were promised to be better because they would deliver results more quickly. Given that California has a large proportion of English learners, it is likely that our scores will be very poor. This may be why the Gates Foundation spent more than a million dollars here last month to sponsor a teacher day devoted to Common Core implementation.

Professor Gregory Cizek makes an interesting point in this report:

The previous generations of tests made more modest claims about things that we could easily validate. It was just about measuring the curriculum, something those tests more or less did pretty well. We didn’t make the claim that how a student did on those tests would predict the likelihood of them being ready for college or a career.

This assumption about the Common Core tests is now being built into all sorts of gates that actually affect student entrance to college and the careers that Common Core supposedly prepares them for. We have a new Pearson-owned GED test that has drastically reduced the number of students who can open that door. Having finished with being the “architect” of the Common Core, David Coleman has moved on toredesigning the SAT test to align with his design. And in a rather circular fashion, colleges and universities are now being pressured to use these test results as the very definition of “college readiness.”

Another report came in this week from the United Kingdom, which has followed a similar path to reform, emphasizing college education as the way to build the middle class. The Guardian tells us that:

Britain’s failure to create sufficient high-skilled jobs for its rising proportion of graduates means the money invested in education is being squandered, while young people are left crippled by student debts, warns a new report.

The mismatch between the number of university leavers and the jobs appropriate to their skills has left the UK with more than half of its graduates in non-graduate jobs, one of the highest rates in Europe, according to research commissioned by the Chartered Institute of Personnel and Development (CIPD). (full report here)

Editorials in the New York Times and Washington Post reveal deep concern on the part of the elite that the movement to opt out of Common Core tests could cripple the accountability machinery that has done so much to advance the corporate reform process. This response by parent activists Leonie Haimson and Jeanette Deutermann explains why opting out has become necessary.

Common Core tests take the flaws of No Child Left Behind and magnify them, and the test scores project forward a thoroughly false image of a student’s ability. I am sorry that people who know better (or ought to) think that we can “work together” to make this system work. Any system that uses these standards and tests as its engine will take our students and schools into a deep ditch.