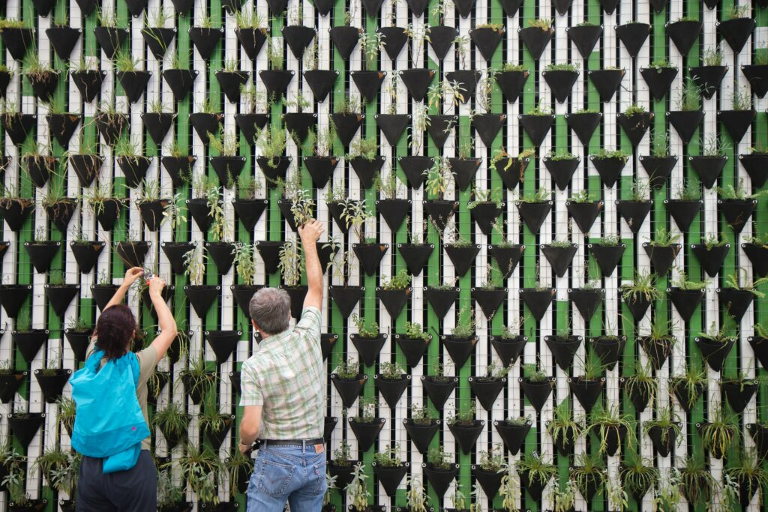 Commoning Our Way Through The Climate Crisis

In early 2020, the Covid-19 pandemic forced a retreat into our homes in a grand finale of our atomization and separation from nature — a separation that was exacerbated by enclosures. Yet physically distanced (and with the fragility of the economic system exposed) we remembered our interdependence. Many of us rediscovered ways of self-organizing and returned to the culture of commoning that has been overlooked as a vital way to address many issues, like climate change.

Across countries, collective responses to the climate crisis have flourished at local levels, particularly where there were existing networks of support and democratic enterprise. Community energy organizations sent thousands of pounds to support neighborhood responders before governments had figured out how to reach people. New groups sprung up without waiting for direction, policy, or funding. They started from what they had around them. Old bedsheets became face coverings, pubs became food distribution hubs, gossips became vital network weavers helping pool resources and identify needs. These organizations were porous with the populations they served; elderly residents volunteering on the phone lines also made use of the services.

Flexing this collective but atrophied muscle has felt like a very new way of working. John Vervaeke describes how it is this that once saved humanity before. A near-cataclysmic moment in the Upper Paleolithic period gave birth to modern humans. This was an environmental degradation of such a scale that humanity was reduced to scraping survival in huddled pockets. Our re-emergence from that period was enabled by a flourishing of new social practices of collaboration: trading rituals of trust with strangers, initiation rituals of loyalty to the group. It took a near-extinction level event for humanity to upgrade in the Paleolithic. Our response to Covid-19 could see us adapt to meet the challenge of climate change without the cataclysm.

As lockdown is lifted, the analysis of failures gives way to the focus on rebuilding our society and finding a way to deal with the climate crisis. We supposedly must decide between dependence on massive centralized state intervention, such as the Green New Deal, or the runaway techno-utopian beliefs of the private sector. But, if we know where to look, we can see that a new world is already emerging and it is not led by market or state, or by Left or Right political traditions. It is fractal, messy, adaptive, and exciting – it is ‘commoning’. As the Nobel prize-winning scholar of the commons, Elinor Ostrom said, commoning rejects the blueprint model or ‘test and scale-up’, and instead enables empowering, self-organized approaches designed within the specifics of the local context. While the old fossil assets are retired, we need to common the green assets to ensure the transition is just and demanded by, not foisted on, people.

“Historically the commons referred not just to the physical land but to the people who inhabited and used it. The word meant ‘together-as-one’, and bound together by obligation.” –Heather Menzies, Reclaiming the Commons for the Common Good

Commoning is the process of creating or bringing resources into collective ownership and management. It is also the social practices, the rituals, rules, and labors of people working together as one to manage them. The Enclosures in Britain, where common land was fenced off into private ownership, had been happening informally for many centuries but was applied with legal force with the Scottish Clearances and an Act of Parliament in the 18th Century.

As Elinor Ostrom proved, the tragedy of the commons isn’t that a commons is always exploited, but quite the opposite: an open-access resource will be exploited unless it is managed as a commons. We see the same misunderstanding of the climate commons. The climate is clearly a global common good, a foundational good critical to our survival. However, the climate has become a crisis because it is treated as the ultimate global open-access resource: why will the UK reduce our emissions if China won’t.

The logic dictates it must be managed at an international level to prevent exploitation, which is why we see the majority of climate efforts focused on the UN and the Paris Agreement. If we understand commons as Ostrom teaches us, not as a resource management strategy, but as relational to the ecosystem and to each other, then this would require the adoption of a global relational culture, with mechanisms for dialogue and conflict resolution. People are participants in, not managers of, a commons. Currently, we lack this global culture, but perhaps this might emerge outside of the existing structures as nationalism and an international failure to grapple with a present and immediate danger, though it feels very distant.

The climate is not a resource that can be managed collectively or otherwise which is why a proxy – carbon accounting – has been created by governments and big business. This carbon accounting view of climate change is helpful in interpreting the science, to guide the parameters, but it is problematic when identifying the solutions, diverting precious time and innovation in the wrong direction, towards carbon trading and carbon offsetting.

As American author Charles Eisenstein points out, even granting that carbon accounting can secure the requisite decrease in carbon emissions, it does not guarantee a system of stewardship that remains within ecological boundaries, let alone addresses inequality. It gambles on the hope that carbon management will steer resource management in the right direction. It’s the tail wagging the dog. Carbon accounting is to ecosystems as GDP is to economic well-being. We have been focused on the symptom – climate change – and not the cause, which are the ways we interact with natural resources.

When we common we do not need to create abstractions or proxies for the relationships and resources that are real in their multiplicity to us; we live with the consequences and feedback loops of the ecosystem and others. Abstraction is the first step in the destructive linear pipeline that leads through extraction, production, use, and disposal. Carbon accounting could be seen as an attempt to enclose the climate as it strips values and relationships from the climate and packages it up as a  tradable commodity. If carbon accounting starts with what we need to reduce or eliminate from the global climate, commoning starts with what we have and where we are.

Commoning creates shorter supply chains that reduce climate impacts as well as increase resilience and other social benefits. Community Supported Agriculture, for example, ensures that food consumption is based on local produce, increasing the viability of organic farming for farmers and affordability for consumers.

Climate campaigning often assumes that action on climate can only be addressed meaningfully through national and international policy-level interventions. It must be government-led, and so the government is the pole that attracts action. Individuals are rallied to ask for change from a distant, overarching center. As governments and companies seem to rebuff the demands for meaningful change, this risks instilling learned helplessness. These campaigns tap into the desire for agency, only to strip it.

Commoning, on the other hand, builds agency as it creates a mandate. Commoning signals commitment to desired solutions: it comes at a cost (which it more than rewards). The result, even in the absence of national policy change, is a new relationship of participation in a shared asset. Such is the impact of participation, that commoning generates more commoning and this could build political mandate and expertise in the relationships of commoning.

The next act should be not to help legacy institutions to continue, but to help the people and ecosystems enclosed within them to bring forth new, common ones.

As we watch a new era of nationalism that can’t even coordinate in the face of a present and immediate danger, strong global governance on climate change seems a distant hope, one we cannot give up on but also not solely rely on. On the other hand, local responses have proven effective at buying time for lumbering governments and multinationals to adapt*.*

Hospice The Old Economy, Common The New One

The transition to a low carbon economy necessitates ‘hospicing’ fossil fuel assets (managing the impacts of their closure and keeping much of it in the ground), while also creating new assets (in renewable energy and heating, forests, regenerative agriculture for our food and water). The mainstay of climate policy and campaigns focus on shifting the carbon load rather than focusing on who owns, controls, and benefits from these assets. Refocusing on commoning these new assets, we have the potential to accelerate the transition, as the broader benefits will encourage more people to be receptive. This is not pie in the sky. Nearly half of Germany’s renewable energy is citizen-owned.

Commoning renewable energy assets ensures the social and financial benefits accrue locally to people, creating virtuous circles of resilience. Commoning, though, does not deny national governments a role. Government has a critical enabling or disabling role, but it is in service to the local commons management rather than the current narrative which assumes ‘community’ only steps in to fill the absence of public delivery.

Applying a commons approach to addressing climate puts the focus on enabling the emerging new economy. In a forthcoming report with IPPR for Local Trust, we map the ways this new economy is already happening. Community-managed indigenous forests are already proven to sequester more carbon than government-managed forests. Community-owned wind turbines gather the kind of local support through the planning process that is difficult for commercial companies. Community land trusts are building Passiv housing and platform co-operatives are being set up to manage community car clubs.

Policy and funding should prioritize these common ownership models because of the multiple social and economic benefits alongside climate outcomes. Many European cities are experimenting with urban commoning – where the government is in service to a collaborative social ecosystem designed, run, and owned by the citizens.

Climate citizen assemblies that have proliferated as a way to open up the decision making to a process of deliberation amongst ‘common people’ could be seen to be fostering a commons culture. Ostrom described the importance of mechanisms for citizen dialogue and conflict resolution as a critical element of commoning.

As we embark upon this great transition that is already taking place, all efforts need to be focused on retiring the dying fossil fuel assets, what Vinay Gupta calls the ‘heroin of the economy’, while commoning the renewable and healthier assets being created in their stead. This will be the surest way to ensure a fair and just transition, one that addresses the deep-rooted inequality from a fossil fuel system built on colonial exploitation not just of the planet but its people. First, as David Bollier says, we have to identify as commoners.