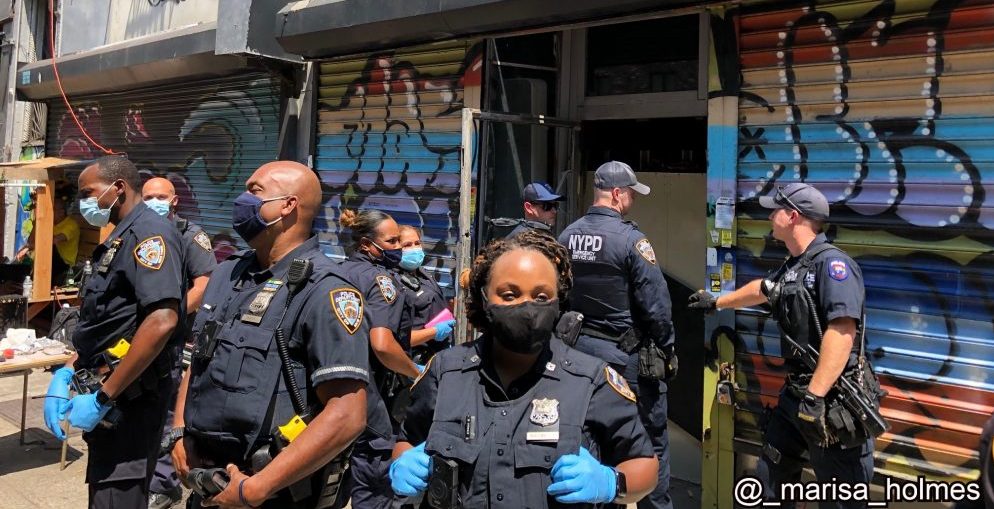 We are The Gym, an organizing network focused on mutual aid and community support along the Myrtle-Broadway corridor of Bushwick on the occupied Lenape land known as Brooklyn, New York. On Saturday, July 24, the NYPD violently attacked our neighbors, friends, and comrades at the behest of the landlord, Richard Pogostin.

We began using the sidewalk space in front of The Gym storefront at 1083 Broadway in August 2020, when Pogostin’s corporation, Dodworth Development of New Rochelle, originally harassed us and removed the mutual aid and organizing efforts in the space. Last week, after nearly a year of daily operations on the sidewalk, The Gym reclaimed the storefront, which had been kept vacant and neglected. On Wednesday, July 21, the building’s superintendent called the police, who quickly escalated by entering with tasers drawn and arresting one comrade.

On Saturday, the super again sent the NYPD to our doorstep. That morning, six people put their bodies on the line to defend The Gym. We put out calls in our networks and on social media in the morning; by the afternoon, dozens of community members had gathered to do the same. The NYPD responded to this show of solidarity with a horrific crackdown that put one comrade in the hospital, 14 in jail, and injured many others. The footage is so brutal that elected officials are now calling for an investigation into the violence. The NYPD entered the storefront with weapons drawn at six unarmed people linking arms — all in the name of private property.

The arrests in front of 1083 Broadway ⁦⁦@t_h_e_g_y_m_⁩ were brutal. Here, SRG moved in and tackled this guy to the pavement before attacking other protesters. ⁦@ReElectNydia⁩ ⁦⁦@SandyforCouncil⁩. pic.twitter.com/ottX551aiS

We dedicate ourselves to caring for the community because the city does not. Using a vacant space for mutual aid harms no one, but it does threaten the power of the state and capital that wants to keep us starving, precarious, and isolated. Real power resides in solidarity. The continued police presence in front of The Gym tells us that they are afraid of this power. They are there to surveil, intimidate, and rack up overtime pay guarding an empty storefront while countless people go hungry and unhoused. They are spending thousands to protect what they can’t afford to give away: a moral victory for the people.

We are deeply grateful to the community for their solidarity and love. We look forward to seeking a better world with you, and breaking the chains that bind us to an unjust system. We will be holding a press conference at 1083 Broadway, Brooklyn, at noon tomorrow, Wednesday, July 28, to announce our demands and next steps.