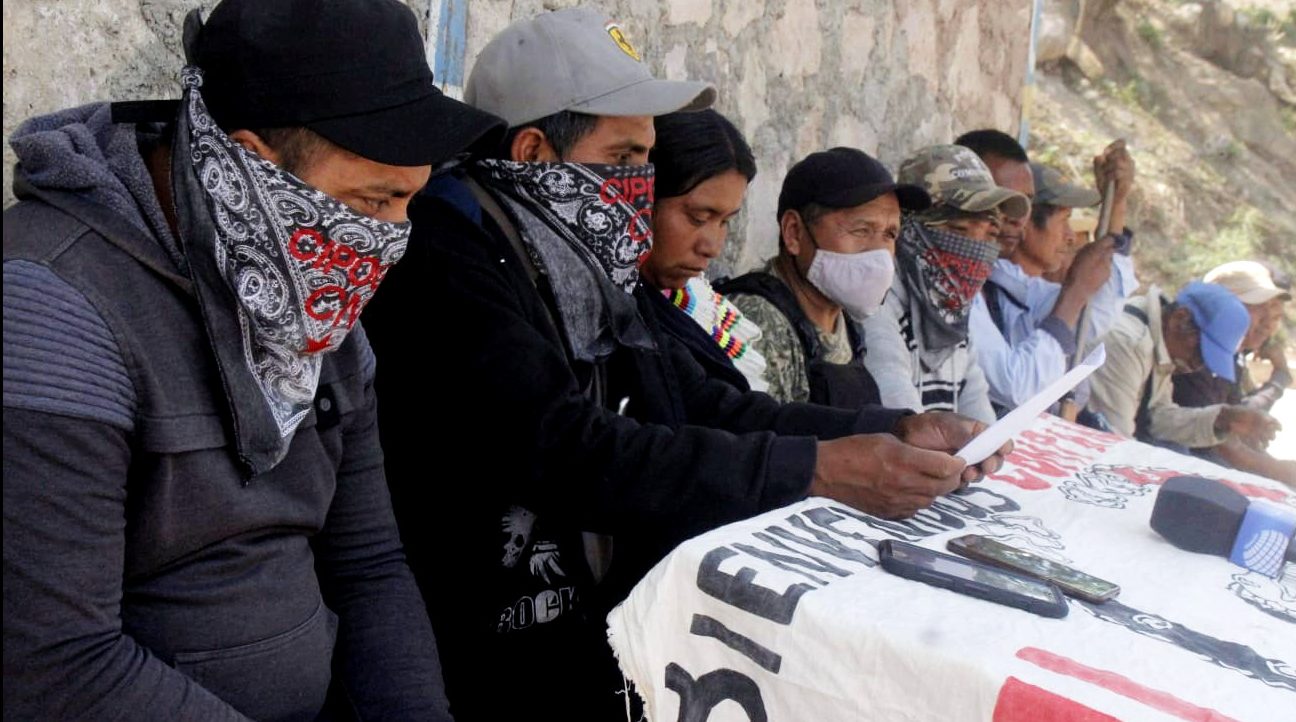 Refuse To Allow Elections In Their Territories.

On May 28, 2021, Indigenous communities belonging to the Popular Indigenous Council of Guerrero-Emiliano Zapata, and to the Regional Coordinator of Community Authorities-Community Police-Founding Pueblos, set up road blockades in the Montaña Baja region of Guerrero, a southern state in so-called Mexico, announcing they will prohibit the June 6 mid-term elections from taking place in their communities.

The mobilizations by the 24 communities belonging to CIPOG-EZ and CRAC-PC-PF are a response to the ongoing attacks carried out by the organized crime group, Los Ardillos, who are active in the region. While CIPOG-EZ has continually denounced the disappearances, kidnappings, assassinations, and unbearable climate of violence in their communities since 2015, the state has ignored the situation, effectively facilitating the attacks. During that time, dozens of members of the CIPOG-EZ have been murdered or disappeared by Los Ardillos.

The state’s tolerance of organized crime groups operating with impunity in the region demonstrates how narco-paramilitary violence is integral to the strategy of the state in its mission to disrupt and destroy independent and autonomous community organization. It proves once again that state violence and organized crime violence in Mexico cannot be easily separated from one another. In fact, they often overlap to the degree that, as in Guerrero, members of the same family run for political office while others run narco-paramilitary groups.

Within this context of intentional state neglect and narco-paramilitary besiegement, communities in the region have continued developing their own organizational capacities and institutions from within, via the Popular Indigenous Council of Guerrero-Emiliano Zapata and the Regional Coordinator of Community Authorities-Community Police-Founding Pueblos. The latter organization in particular is focused on coordinating armed community self-defense forces to address the climate of insecurity in the region, recognizing no one will protect the communities but themselves.

Below we reproduce a translated communique from CIPOG-EZ and CRAC-PC-PF released on the day the blockades went up.

To the Grandmothers and Grandfathers

To the Men and Women

To the Honest Media

We want to begin by saying to the media who visit us today that we know the risks embodied in telling the truth. More so, when that truth is hidden between mountains guarded by narco-paramilitaries who have no respect for human life. We thank you for having the courage to show up here. We are even more grateful when through your words you make visible what happens here. When with honesty and humanity you tell of the brutal violence that our 24 communities are living through, under siege, and being assassinated by the criminal group, Los Ardillos. We are grateful that you explain how the three levels of government have refused to listen or pay attention to us. We are grateful that you tell what we are living through here, not just as another post, but as an action that will contribute to the life of our communities. Again, thanks for coming.

Today, May 28, we once again mobilize our communities, because while we have sought out different ways of making ourselves visible and our words listened to, the governments do not care. They continue to despise and discriminate against us. On May 16, in Mexico City, we presented the report: “Crimes Against Humanity and Grave Violations of Human Rights Against the Indigenous Peoples of CIPOG-EZ, CNI-CIG in Guerrero.”

We went to Mexico City on behalf of the 24 communities of the Montaña Baja of Guerrero, as members of the organization, the Popular Indigenous Council of Guerrero-Emiliano Zapata (CIPOG-EZ), which is part of the National Indigenous Congress and the Indigenous Governing Council. We also participate in the Regional Coordinator of Community Authorities-Community Police-Founding Pueblos (CRAC-PF-PF) with the intention of searching out alternative forms of justice and security in our communities. We went to present this report which was elaborated by the Civil Observation Mission of the Sixth. This Civil Observation Mission was made up of compañeros and compañeras who came from Mexico City to our communities to do the work that the bad government refuses to do: document, investigate, listen, and not speak for us.

We went to Mexico City to relate what we are living through in our communities, that our compañeras and compañeros are being killed.

We went to say what you already know, and that the bad government, from Andrés Manuel López Obrador, and all of the others, regardless of their party, are not interested in hearing. The state and municipal governments are not interested either. On the contrary, we know that the three levels of government are in collusion with those who are shooting, torturing, disappearing, kidnapping, displacing, and assassinating us.

The report documents very clearly that we are not only being killed by bullets. We are being killed by what the capitalists, governments, and military forces know how to do so well, by circling us, suffocating us with terror, with checkpoints and blockades. They prevent us from moving. They are hunting us like prisoners, denying us the right to work, education, healthcare, justice, free movement, and mobility. Blood, poverty, and fear runs through our communities.

They still don’t listen to us, nor do they see us. Boys and girls have to carry pistols for the government to finally pay attention. We have explored all other routes to not die, to live, all of us, those who inhabit the 24 communities. You know that we don’t enjoy having to confront organized crime groups.

The report says to the bad government:

However, we know well that they won’t listen to us. Instead we presented the report to our sister Marichuy, and with that, to the people of below in Mexico.

We know that our compañera Marichuy will take our words wherever she goes and wherever her voice resounds and shouts:

Never more a Mexico without us!

After receiving the report, our sister Marichuy, spokeswoman for the Indigenous Governing Council, said that she would bring it to the rest of the National Indigenous Congress, so that they will know about the problems our communities are suffering. As nobody listens, we have to search below, amongst the communities, amongst the different Indigenous peoples. Together we have to weave resistance, and support one another.

Nobody listens to those of us who are Indigenous. We are being killed because they want to take our lands and the natural resources that our lands hold. Yet, we have defended, and we are ready and willing to continue defending, the land, the trees, our language, culture, water, our freedom to move through the territory, our Indigenous being.

We also believe that our vindication of the Zapatista struggle, and the attempt to continue their path, puts everything against us, making our existence almost impossible. Yet, we know nothing is impossible. Our brothers and sisters of the EZLN have told and shown us this, throwing a mountain into the sea, on which today they navigate toward Europe.

Our efforts will always be on the pathway of life, of construction, of the honest word. The bad government responds to us with lies, with contempt, and with crumbs. They tell us that things will change if we vote for this or that political party, yet we know that is pure lies. That is why, if the contempt continues from the bad government, we will not permit the electoral process to take place in our territories. Besides, we know well that the elections are a farse and that those of the political class aren’t the bosses, but that the true boss is capitalism.

In addition to this action, we will continue mobilizing ourselves through community organization and solidarity with those who struggle for a better world. For example, the compañeros and compañeras of the Teacher’s Training School of Mactumactzá, in the state of Chiapas. For wanting to be trained in the noble work of teaching, they were brutally repressed and today are victims of that thing called the justice system. A system, that in truth, is utilized by the bad governments to quiet the voices of those who demand justice. We demand freedom for the detained of May 18.

This is our simple word, which is and will be reflected in practice.

Long live the People who Struggle for life!