Communities Of Color Hurt The Most By Postal Service Attack

The Postal Service is Under Attack.

Our Research Shows Who This Hurts Most.

With just weeks until the 2020 election, the USPS is racing to prepare for a historic surge in mail-in voting. Our recent analysis of USPS records, which we received via Freedom of Information Act (FOIA) requests, suggests that the number of mail-delivery complaints has risen since March, especially in communities of color.

For nearly 250 years, the United States Postal Service (USPS) has been a cherished giant of public life. Its reach is immense: In 2019, postal workers traveled 1.34 billion miles to deliver nearly 143 billion pieces of mail around the globe. Its employees number more than 630,000, and it handles 48 percent of the world’s mail. Its size has not tarnished its image: 9 in 10 people in the United States approve of the Postal Service, making it the most popular government agency.

But this year, the USPS faces new challenges. The pandemic has depressed its revenue. Cost-cutting measures by the Postmaster General have strained its work. And millions of voters have already mailed ballots.

How is the USPS faring under this pressure? How did we get here? And how can we ensure that all mail, including ballots, are delivered on time in the coming weeks?

The USPS weathers attacks during a pandemic

On April 9, 2020, then-Postmaster General Megan Brennan warned Congress that the USPS—hemorrhaging revenue because of the COVID-19 pandemic—would “run out of cash” by the end of September without financial support.

Less than a month later, businessman Louis DeJoy took the helm of the USPS. Almost immediately, he began instituting far-reaching changes. He cracked down on worker overtime and late mail deliveries, forcing postal workers to leave mail behind, and he ordered the decommissioning and even dismantling of mail-sorting machines—more than 700 this year alone. Complaints of missing and delayed mail have poured in from across the country. Although pushback from at least 20 states and the public, as well as rulings from four federal courts, led DeJoy to suspend these changes in August, the damage that has already been done could be felt for months or years afterward.

The USPS was under strain even before this summer’s slew of cost-cutting changes. Since a 2006 law imposed new burdens, the USPS has remained in debt despite finishing each year with revenue surpluses for most of the last decade. This strain, coupled with the surge in mail-in voting, has already affected elections: During the 2020 primaries, at least 9,000 absentee ballots were never sent to voters who requested them in Wisconsin, and many that were sent never reached voters.

These challenges could prove especially consequential for the upcoming election. Millions of people will cast ballots this November, and—with more than 215,000 people dead from COVID-19 in the US and health officials urging the public to practice social distancing—many will choose to vote by mail. With at least 75 percent of US voters eligible to vote by mail this year, experts expect between 80 million and 100 million ballots to be mailed, an unprecedented number.

With the help of FOIA, we crunched the numbers

To assess how the USPS has fared this year, the Union of Concerned Scientists (UCS) asked the USPS for its 2020 data on mail delay complaints from customers. This request was possible because of the Freedom of Information Act (FOIA), a law that allows any member of the public—you, me, your grandpa, your grocer—to ask for government records. We worked with helpful FOIA officers at the USPS to obtain more than 2 million lines of data. Then our resident data expert, Casey Kalman, analyzed these data alongside Census Bureau demographic data from across the United States.

We found that the number of mail-delivery complaints has risen since the start of the pandemic. This could be because mail volume has plummeted, financially ravaging the already cash-strapped Service; it could be because thousands of USPS workers have fallen ill. Or we could be missing other information. We haven’t yet received total mail delivery, so we don’t yet know whether the percentage of mail that’s delayed increased. We will update this analysis as we receive more data.

What we know for sure, though, is that complaints of delayed mail were more prevalent among communities of color: 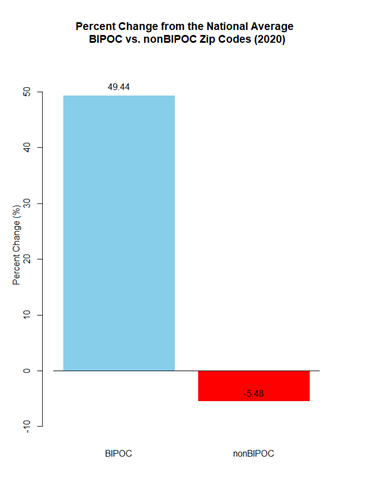 The average number of mail complaints per 1,000 people is nearly 50 percent higher in communities of color (zip codes whose population is more than 45 percent Black, Indigenous, or other people of color) than the national average. These disparities may have existed before the pandemic and the USPS’s recent changes, but they could still shape how, whether, and which mail-in ballots are counted come November.

Other teams are investigating USPS mail, too. The New York Times used a mail-tracking service to calculate the percentage of mail delivered on time in several US cities, while we relied on raw numbers of delayed-mail complaints nationwide. Both analyses found that mail delays increased over the summer. The Times also found that delays spiked in July, when Postmaster General DeJoy instituted operational changes to the USPS.

These analyses paint a troubling picture.

Members of these underserved communities already face enormous barriers to voting: they have been disenfranchised through gerrymandering, purged from voter rolls, blocked from early voting, and saddled with restrictive ID laws. Younger, Black, and Latino voters also have their mail-in ballots rejected at higher rates. A disempowered USPS could further entrench these disparities, which research has shown can harm public health.

The public relies on the USPS. We must support it.

Last week, I sent my grandmother a letter for her birthday; next week, I will mail my 2020 election ballot from home. For both, I rely on the US Postal Service.

The USPS has provided jobs and a lifeline to government services for millions of people regardless of race or income, including for rural communities and those who receive necessities like medicine through the mail. It is also a popular public good, earning approval from the vast majority of people in the United States. This year and in future years, the USPS must be well funded, well resourced, and championed by our elected officials as it works to uphold the democratic process—for all of us, equally.