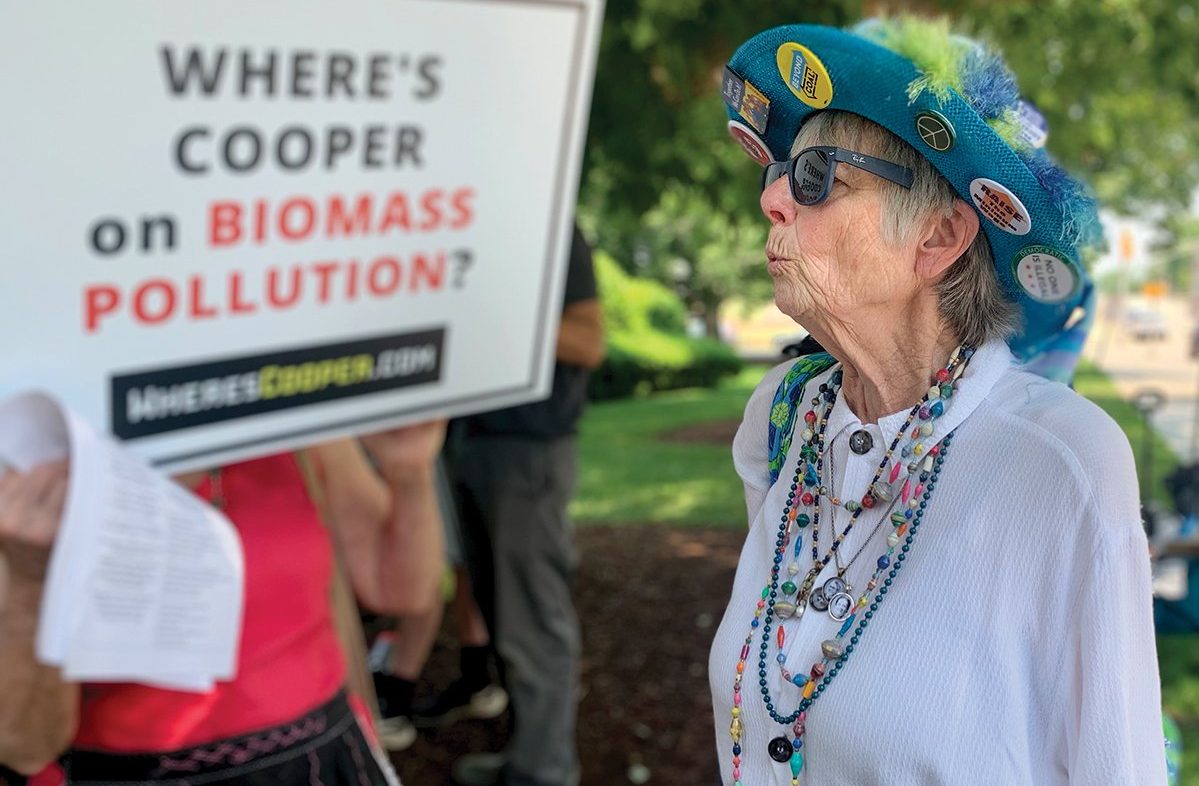 Communities Of Color Want Wood Pellet Byproducts Out Of Their Neighborhoods

Above Photo: The Raging Grannies gathered at Halifax Mall to protest, singing songs like “Where is Cooper?”. Ellie Heffernan.

And out of their lungs.

Belinda Joyner describes her home of Northampton County as a dumping ground for undesirable uses—hog farms, landfills. Northampton was also slated to host the Atlantic Coast Pipeline’s compressor station before the project was canceled.

When Joyner stood at a podium in the North Carolina legislative building on Wednesday, she was most concerned about wood pellet facilities.

“We have other states that have taken into consideration the cumulative impact, the health impact, on these communities and they’re saying no to these companies that are coming,” Joyner said. “You know what? North Carolina has become a cesspool, because everything that everyone else doesn’t want, we don’t have the laws to protect us.”

Joyner was one of many speakers at a press conference and rally to draw attention to what they say is Governor Roy Cooper’s inattention to deforestation and pollution by the wood pellet industry. North Carolina residents, community leaders, and activists gathered to discuss how the state’s poorest communities are impacted by wood pellet companies such as Enviva Biomass. Speakers addressed their criticisms of environmental policies issued by Gov. Cooper and state government agencies.

The wood pellet industry, which is the third major contributor to rising carbon emissions in the state, is responsible for 60,000 acres of wood loss annually, according to rally organizers. In just seven years, Enviva Biomass logged enough acres to release 28 million tons of carbon dioxide.

North Carolina is the biggest producer of wood pellets in the United States, and the industry receives $7.1 million in subsidies annually, said Emily Zucchino, the director of community engagement at the environmental advocacy nonprofit Dogwood Alliance. The United States sold 7.2 billion kilograms of  wood pellets with a value of $981 million last year, according to U.S. Census Bureau trade data. A bulk of these exports are burned for fuel in European power stations.

“Yet the counties with these industries remain the poorest,” said Zucchino. “This use of taxpayer dollars does not advance the state or support long-term jobs at rural communities.”

Northampton—like Hertford, Sampson, and Richmond counties, where the state’s four wood pellet facilities are located—is a Tier 1 county, a designation given to the state’s 40 most economically distressed counties. Within these counties, the facilities are located in census tracts predominantly inhabited by racial minorities. A fifth facility has been proposed in Robeson County. The rally organizer’s petition states people of color account for between half and almost 90 percent of the residents in these five counties.

Demonstrators criticized the large numbers of North Carolina’s trees that are cut down and sold in the form of biomass pellets to other countries for fuel, worsening climate change. Pellet facilities also directly harm local communities by releasing carbon dioxide and air pollutants like PM 2.5, which are associated with respiratory disease, heart disease, and cancer. Deforestation can also worsen floods, a major concern for counties like Robeson that were decimated by Hurricanes Matthew and Florence.

The Rev. Richie Harding, another community member from Northampton County, said the state’s politicians who have expressed solidarity with the Black Lives Matter movement must also care about the racial disparities surrounding pollution.

“If Black lives matter, why is my community the desired location for a facility that would not only shorten my life, but the lives of my children?” Harding questioned. “Why is it OK to have the dust cover the holes, the cars, the children’s toys for monetary gain because it’s a neighborhood of people of color?”

Sarah Muskin, a graduate student in the Gillings School of Global Public Health at UNC-Chapel Hill, said she and her classmates contacted Joyner to research Enviva Pellets’ environmental and public health impact in Northampton County.

Demonstrators are also concerned about potential pollutants from the proposed but not yet operational Robeson County pellet facility. Active Energy Renewable Power, a subsidiary of the UK-based company Active Energy Group, received $500,000 in grants from the North Carolina Department of Commerce to run the plant before the N.C. Department of Environmental Quality (DEQ) approved its permit. A lawsuit was filed by the Southern Environmental Law Center, stating AERP has violated state laws and the federal Clean Water Act by illegally discharging wastewater into the Lumbee River without a wastewater permit.

Rally organizers are now demanding the N.C. commerce department and all other state agencies halt subsidies, grants, and incentives that are not part of the N.C. DEQ Clean Energy Plan and Gov. Cooper’s Executive Order 80 on climate change. They also asked DEQ to deny all future permits for such projects, review the impacts of intensive forest harvesting for wood pellets, and complete an impact report by November of this year.

The rally followed a conference hosted by Rep. Garland E. Pierce, (D-Scotland, Hoke) who represented affected residents prior to a legislative redistricting. Approximately 60 people called on Gov. Cooper to cut ties with the wood pellet industry. Representatives from impacted counties, nonprofit organizations, and even the Raging Grannies gathered at Halifax Mall to sing songs like “Just Say no to BIOMASS” and “Where is Cooper?” After the rally, participants delivered a petition with their demands.

Anita Cunningham, the program director for the Robeson County Cooperative for Sustainable Development and member of the Robeson County NAACP, said she came to the rally to spread awareness about the environmental harm communities were facing.

“I’m not against business at all,” Cunningham told the INDY. “But I think that some processes can be put in place to make it less harmful for the environmental justice communities that they’re harming.”