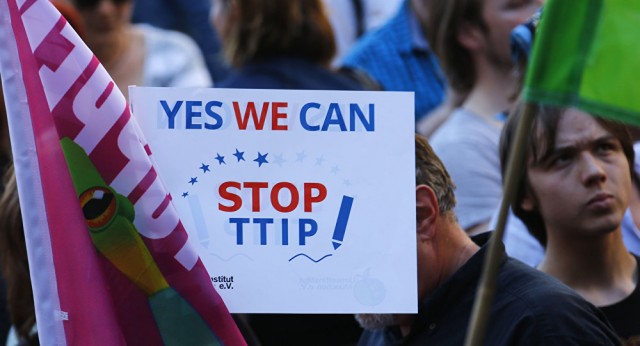 Note: You can join communities that are rejecting these rigged corporate ‘trade’ deals that are being negotiated in secret and will undermine our ability to pass laws that protect public health and safety and the planet by organizing to create a TPP/TTIP-Free Zone. Details below.

As negotiations of the TransPacific Partnership (TPP) inch toward completion, resistance to it and the other rigged corporate international treaties, the TransAtlantic Trade and Investment Partnership (TTIP) and Trade-in-Services Agreement (TiSA), is escalating.

A powerful form of resistance is underway in communities across the United States and the European Union – people are passing resolutions opposing these ‘trade agreements,’ which are actually international treaties that should not be allowed to fast track through Congress, to create TPP and TTIP-free zones.

In the European Union, activists are working to pass 10,000 such resolutions. In collaboration with the public service union, Unison, Global Justice Now, is providing helpful materials. Global Justice Now reports:

“It’s not just the UK. In Austria, Germany, France and Belgium there are significant numbers of TTIP Free Zones being declared by local authorities. When EU and US negotiators in Brussels leave their meetings they immediately walk out into the Brussels municipality which is itself a TTIP Free Zone.

There are 39 ‘no TTIP’ councils in Spain and a good covering in Northern Italy. This is a Europe-wide movement of local resistance to the corporate power grab that TTIP represents.”

During the fight to stop Congress from passing Fast Track legislation that will be used to rush these agreements through Congress, cities from Seattle, WA to Madison, WI to New York, NY passed resolutions against Fast Track. Labor played a big part in making these successful. Now, new resolutions are underway in more cities with the goal of 100.

On October 8, a resolution will be voted upon in Miami, FL, potentially making it a TPP/TTIP-Free Zone before the next round of TTIP negotiations there. Click here for details.

Organizing a TPP/TTIP-Free Zone is a great way to raise awareness of the ways that these secret rigged corporate deals will directly impact our communities. From the prohibition of “Buy America” practices to the new powers for corporations to sue over public health and safety laws that interfere with their profits to the outsourcing of jobs, lowering of wages, reduction of food safety and raising the costs of health care, the TPP and TTIP place corporate profits over protection of people and the planet.

Here is more information on how to create a TPP/TTIP-Free Zone from the Alliance for Democracy:

“If you, our un-elected representatives, create this corporate-driven monstrosity and then go to Congress for a rubber stamp, WE WILL NOT OBEY.”

Which cities have gone TPP/TTIP/TiSA Free?

This map shows which US cities and counties have passed TPP Free Zone ordinances or resolutions against Fast Track, TPP or other pending trade pacts like the Transatlantic Trade and Investment Partnership (TTIP) and the Trade in Services Agreement (TiSA).

It is time to make our municipalities “TPP Free Zones,” following in the footsteps of the successful resistance to an earlier trade agreement, the Multilateral Agreement on Investment, which was defeated in 1998 thanks to a global grassroots campaign.

Click here to download a .pdf of our TPP Free Zone pamphlet. Print it on legal-size paper, or read the text online here.

Educate for action: Our Fall 2012 issue of Justice Rising focused on international resistance to corporate global trade agreements, including the TPP. To read it online, click here. If you’d like to a copy, contact us at afd …at… thealliancefordemocracy … org or call 781-894-1179.There’s more information, videos and resources on our TPP page.Questions? Ideas? Resources? We’d like to hear from you. Contact the Alliance for Democracy office at afd (at) thealliancefordemocracy (dot) org, or 781-894-1179.