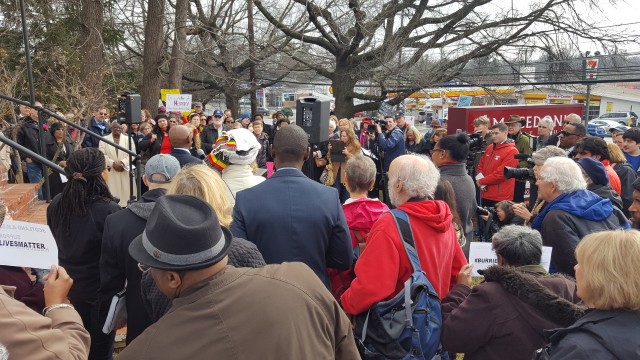 Communities Vow To Stop Equity One From Building On Cemetery 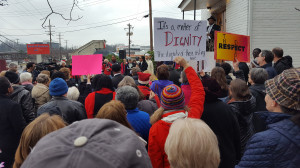 Bethesda, MD – The members of Macedonia Baptist Church (MBC,) established in 1920, one of the oldest African churches in Montgomery County is engaged in a fight with financial powerhouse Equity One in its pursuit to plunder an African cemetery associated with the church and its members.  The current membership of MBC is composed, in part, of descendants of the original African community on River Road.

The MBC community, located in the center of one of the wealthiest communities in the US was once a thriving community of descendants of liberated enslaved Africans in the mid-1860s.  The homes of the River Road African community were stolen by developers and the graves desecrated. After the tombstones were discarded, Montgomery County allowed a builder to pave over the graves and build an HOC apartment building and a parking lot.  It was hoped that this crime against humanity would never be discovered.

This historic community is under attack by the developer Equity One who would like to continue desecration of the Bethesda African community by building a garage on top of the paved driveway; a sacred African burial ground that contains possibly hundreds of our ancestors. Equity One is traded on the New York Stock Exchange. The company is worth approximately $3.1 billion.

Members of Macedonia Baptist Church are not intimidated by the David and Goliath fight. As Rev Segun Adebayo, Interim Pastor of MBC proclaims: “We are aware of the challenges that we face and we are not fearful. As a community of faith, we know who won the fight between David and Goliath.  Despite opposition from MBC, Montgomery County Parks and Planning Commission plans to move forward with an Equity 1 sketch plan approval hearing on February 23.  At every turn in this process, community concerns have been met with disregard and disrespect.”

Reverend Adebayo and hundreds of people from local churches and communities gathered at Macedonia Baptist Church today for a rally and march. Speakers included Rev. Nancy Ladd, a Senior Minister of the River Road Unitarian Universalist Congregation, which is working in solidarity with MBC. She said,  “The desecration of this historic cemetery is yet another phase of the on-going destruction of the African American River Road community and the continuation of the march of white supremacy.  It illuminates, once again our society’s blatant disregard for Black life, even Black life in the grave.” 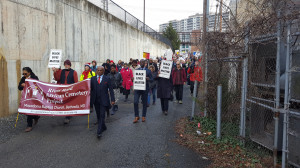 Other speakers included Mayor Jeffrey Slavin of Somerset, a neighboring town, youth from Macedonia Baptist Church, and Mr. Harvey Matthews, a Trustee at the MBC used to play hide and seek in the African cemetery as a child.Mr. Matthews said, “Our family members were disrespected in life and are now desecrated in death.” Whole Foods in Bethesda on River Road stands where his home once stood. Luci Murphy led the group in songs and chants.

Mr. Matthews led the march away from the church after the rally. They took over the streets and chanted and drummed their way to the site of the cemetery, where they held a solemn ceremony. Local anthropologist Dr. Rachel Watkins spoke about an African burial ground that was discovered in New York City, a block from City Hall, during excavation in the 1990’s. The names of the dead who were buried there were read and libations were offered. Participants held flowers and sang. It is believed that between 150 and 500 people are buried there. 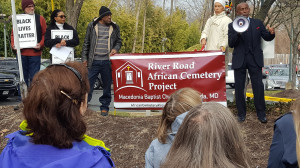 Then the crowd marched to the site of the local Whole Foods and stood in the shade of giant Sycamore trees that Mr. Matthews planted with his parents. He described their large farm that had chickens, pigs, cows and horses. If the farm had not been taken from his family, it would have brought considerable wealth to them. Organizers of the protest were told that if they stepped onto Whole Foods’ land, they would be arrested for trespassing, but Mr. Matthews ignored that and invited people to step onto his front yard. Police remained at a distance and did not interfere.

Video from the ceremony: