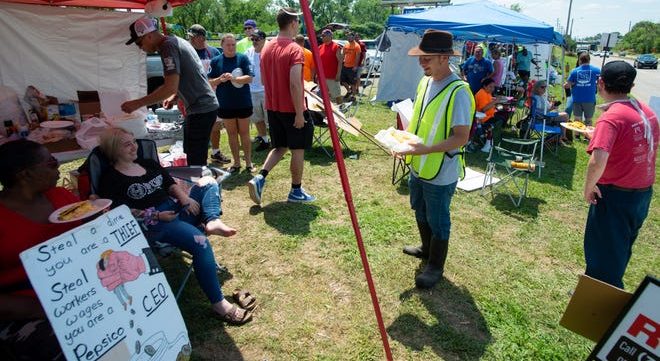 Community support is rolling in for Frito-Lay workers on strike in Topeka.

Going into the second day of the first strike outside Topeka’s Frito-Lay plant in nearly 50 years, a local relief fund had been set up to cover some union members’ utility bills, as area businesses showed support for those on the front line.

Members of Local 218 of the Bakery, Confectionery, Tobacco Workers & Grain Millers Union went on strike Monday after about 400 members voted down over the weekend a recent contract offer from Frito-Lay. The strike will last for an indefinite amount of time, and workers participating in the boycott are going without pay until it concludes.

Given some union members may struggle financially during that time, a local relief fund organized by 785 Magazine aims to raise enough money to cover each union member’s water bill for the month of July.

“The importance of solidarity and collective bargaining is paramount, and we understand the financial hardship many will endure while fighting for fair labor rights,” read a description of the fundraising campaign available on the magazine’s website. “(785) asks you to join us in helping pay one utility bill for each Local 218 member.”

“(785) will work directly with Local 218 Union President and Business Manager to ensure proper and equal distribution of funds,” the magazine’s website stated.

The fundraiser may be found online at seveneightfive.com/local-218-utility-relief-fund.

Other Businesses Stand In Solidarity With Frito-Lay Workers

Other local business, from bars to construction contractors, have also shown their support for union workers on strike.

Brass Rail Tavern, the oldest bar in Topeka, said on its Facebook page Sunday that it would stop selling Frito-Lay products.

“To show our love to our brothers and sisters of Frito Lay we will not be serving Frito Lay products, including Pepsi, until they have came to an agreement,” the bar posted.

Workers picketing outside Topeka’s Frito-Lay plant Tuesday said community members have stopped by to donate food and water, and Victoria’s Bar, at 5011 S.W. Topeka Blvd., dropped off dozens of tacos for strikers shortly after noon that day.

Derek Johnson, a union member who has worked at Frito-Lay for about two-and-a-half years, said it is great to see community members and other area unions coming together in solidarity because a strike is stressful thing, he said.

“You never know how long this is going to go on,” he said. “We have the ability to go find another job while we’re doing this, but even that can be tricky because you’re trying to support the strike line and still provide for your family. … Everyone out here is showing their character and who they are because we’re standing up for what we believe in.”

Paul Klemme, chief shop steward and a member of Local 218’s contract negotiating committee, said there aren’t any union-sanctioned relief funds at this time. For Local 218 to create a relief fund, he said, members would have to take a proposal to the elected board that represents the chapter.

“We’re going to be meeting this month and talking about it,” Klemme said. “I can’t say one way or another whether we’re going to set something up.”

Union members continue to tout dismal working conditions, including forced overtime fueled by a staffing shortage, as primary reasons for the Frito-Lay strike.

“It sucks standing next to these guys sometimes when they tell me, ‘Hey I haven’t seen my daughter all week,’ or ‘My wife is screaming at me over the phone when I don’t come home when I’m supposed to,'” said Jurrel Andrew, a union member who has worked at the local plant for more than four years. “It’s demoralizing.”

Frito-Lay has said previously that it complies with all rules and regulations. Its parent company, PepsiCo, said in a statement this week that it doesn’t anticipate further negotiations with the union for the foreseeable future.