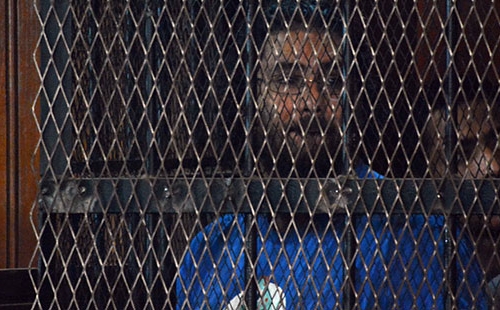 From Cairo: Everyone’s Right To Protest

In Egypt, we are at a crucial juncture. We know that if we — or anyone — gives up their right to protest, we are giving up the right to shape our world.

The following statement was just released by Comrades from Cairo

To Those At Whose Side We Struggle,

We write to you again at the bloody dawn of a new presidency: our fourth in as many years. General Abdel Fattah El Sisi, who oversaw the brutal overthrow of Mohamed Morsi and his Muslim Brotherhood, now sits on Egypt’s Iron Throne. Mubarak’s resurgent police state is more ferocious than ever. The media, controlled by a handful of millionaires, is terrorizing the populace into sacrificing their most basic rights to the double-faced deity of Security and Stability. And the young revolutionaries who dared to challenge the status quo and who, for a moment in 2011, glimpsed the possibility of something new, are being rounded up and jailed one by one.

Having hijacked the popular protests of June 30, 2013 against the Muslim Brotherhood to ride back into power, the military establishment is now using every means at its disposal to silence all forms of dissent and annihilate the hard-won political space of the past three years. Violence and intimidation have always been the principal tools of the police force, but in Sisi’s Egypt the judiciary has been given a new leading role in the suppression of freedoms. Their tool is the Protest Law, which in its seven months of life has been used to round up, detain and sentence thousands of participants in peaceful protests — and to target specific and influential activists within them.

The most noted example today is Alaa Abd El Fattah. On November 26, 2013, around two hundred protesters gathered outside Egypt’s Parliamentary Upper House were attacked by police with water canons, batons, plainclothes thugs, and tear gas. Fifty people were arrested, and once the women, journalists and lawyers — who were all beaten — were released, twenty-four men were left in jail. The following night, the police violently arrested Alaa from his home. Now, Alaa and the twenty-four have been sentenced to fifteen years in prison.

In Alexandria, Mahienour el-Massry, one of the coastal city’s most tireless human rights lawyers, sits in prison on a two-year sentence for holding a protest outside a courthouse where the policemen who murdered Khaled Said were standing trial. Back in Cairo, the founders of the April 6th Youth Movement, one of the most organized young political groups in the country, are serving three year sentences in maximum security. And there are many, many more. Since July 3, 2013, over 36.000 have been arrested for political participation. More than eighty have died in custody.

So now we face the police’s bullets, the prosecution’s corruption and the courtroom’s cages. But there can only be one way forward. We will not hand our rights over to a tyrant and his security state. We will not let our comrades waste their youth in Mubarak’s prison cells. We will not be silenced.

And so on Saturday we march to the Presidential Palace. And around the world friends and comrades have stepped forward in solidarity. Protests have been announced for Athens, Berlin, Derry, London, Paris, New York and Stockholm, with more still to join. Though we know it will be a long time before we reach the dizzying heights of 2011 again, moments of unity and of international struggle are as important as ever. The right to protest is not just under attack in Egypt but is being repressed and criminalized across the globe. And from Gezi Park to Nabi Saleh to US campuses to Marikana, people are fighting for it.

It is impossible to engage on all fronts, on all injustices, simultaneously. And often tragedy is required for focus. In Egypt we are at a crucial juncture. The protest law must be brought down. The imprisoned must be freed. The government must know that it cannot act with impunity. Small actions multiplied, amplify. When the world watched Tahrir Square in February 2011, it swelled the pressure building on Mubarak. When the revolution squared up to the Army (SCAF) later that year, the Generals’ delegitimization was hastened by the international public’s aversion to them. The effects of solidarity are unquantifiable, unknowable. But we do know that if we, or anyone, gives up their right to protest we are giving up the right to shape our own world.