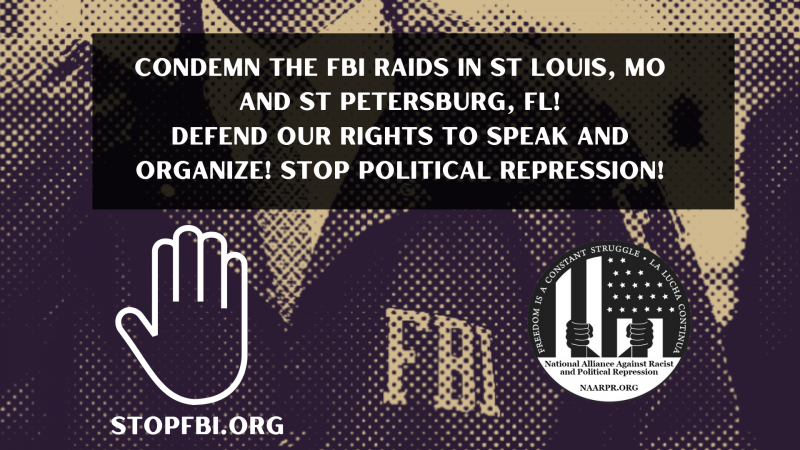 Defend our rights to speak and organize!

On the morning of Friday, July 29th, the FBI conducted raids at multiple locations, including the Uhuru House in St. Petersburg, Florida, the private residence of Omali Yeshitela in St. Louis, Missouri, as well as the Uhuru Solidarity Center, also in St. Louis. The FBI employed flashbang grenades and handcuffed Yeshitela and his wife while the house was raided. The FBI says that the raids are connected to the federal indictment of a Russian man, Aleksandr Ionov, alleging that he has been working to spread “Russian propaganda” in the United States.

The Committee to Stop FBI Repression and the National Alliance Against Racist and Pollical Repression unequivocally condemn these raids. We oppose all efforts by the U.S. government to target activists in any progressive movement in this country. We call for an end to investigations, political harassment, and threats against activists and our movements.

The DOJ is alleging that those raided collaborated with a “Russian asset” to spread “Russian propaganda.” At a time when the US is engaged in an imperialist proxy war with Russia in the Ukraine, these raids have all the makings of a witch hunt. All progressive people should oppose any attempt by the FBI and police to attack people’s movements and organizations. We must always be vigilant about defending our democratic rights to organize and speak out against injustice – including communicating with activists in other countries and building international solidarity. It should also be said this repression come in the context of upsurge of struggle in the Black community.

The National Alliance Against Racist and Political Repression and the Committee to Stop FBI Repression are committed to pushing back against this repression and we stand in solidarity with those under attack.

We know from experience how importance resistance to repression is. On September 24, 2010 the FBI raided seven homes of anti-war activists and the office of the Twin Cities Anti-War committee. Twenty-three activists were subpoenaed to a Chicago-based grand jury that claimed to be investigating “material support for terrorism.” As time went on, the FBI continued their attack on anti-war and international solidarity activists by targeting important veterans of the movement who worked with the Anti-war 23, including Chicano activist Carlos Montes in Los Angeles and Palestinian organizer Rasmea Odeh in Chicago. A national defense campaign defeated most of these attacks.

All those active in the movements for peace and justice should use this moment as a reminder to never speak with agents of the federal government prying into your activism or the activism of others. “I have nothing to say, please speak with my lawyer,” are all that need to be said. If you are being taken into custody, all you are required by law to do is confirm your name and tell them that you would like to speak with your lawyer. If federal or local agents show up at your home or organizing office, do not let them in without a warrant, and if they have a warrant, inspect the details of the warrant closely – if any detail is incorrect, such as the spelling of a name or address, point out the error and do not permit entry onto the premises.

Don’t talk to the FBI!