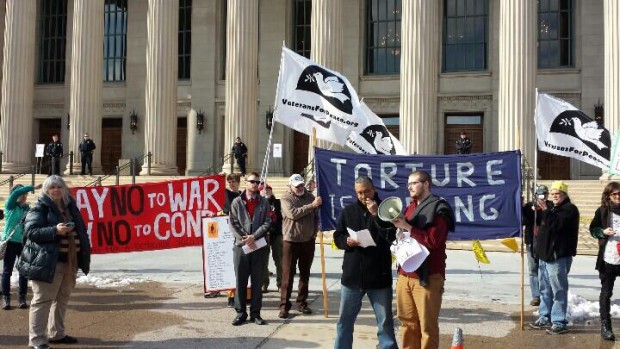 Above: Condolezza Rice protested a University of Minnesota by Scott Wasserman

Coleen Rowley writes about Rice’s speech at the University of Minnesota:

The University apparently has a short and incomplete memory of Rice’s role as national security advisor and Secretary of State in the Administration of President George W. Bush. Nowhere in the U’s glowing description of Rice and her contributions can one find a hint of what Ms. Rice actually did while in power. There’s no mention at all of:

* Her lying about her own failures (and of others in the Bush White House) that enabled the 9/11 attacks to occur that killed nearly 3,000 people. Rice was warned urgently, even before the famous presidential briefing in August 2001, that an attack was imminent. Yet she did nothing, making little to no effort even to share information to thwart the attack, offering the excuse that she wasn’t informed of the exact date and time. Afterward, she repeatedly lied, saying that “no one could have predicted…” She amended her testimony to the 9/11 Commission to say, “I could not have predicted” instead of “no one could have predicted.” But that, too, was a lie. Rice, along with the President and his aides, had even moved to a naval vessel upon prior warnings that terrorists were planning to fly a plane into the Genoa G-8 conference they had previously attended. In fact there were so many warnings coming in during the spring and summer of 2001 that it was said by the 9/11 Commission that “the system was blinking red” and that U.S. intelligence directors had their “hair on fire.”

* Taking her cue from what George Bush once termed “catapulting the propaganda,” not even a year after 9-11, Rice began giving fear-mongering speeches that falsely alluded to Iraqi President Saddam Hussein’s alleged possession of and intent to use nuclear bombs. Rice knew there was no evidence for her “mushroom cloud” speeches but numerous firsthand accounts and memoirs, along with the “Downing Street Memo,” provide evidence that she, along with other key Administration figures, signed onto “fixing the intelligence around the policy” of their previously agreed-upon goal: Launching war on Iraq.

Arran Edmonstone writes about the three videos below:

Condoleezza Rice was invited to speak at University of Minnesota’s Distinguished Carlson Lecture Series on April 17, 2014. The University of Minnesota conveniently failed to acknowledge her role in the war crimes surrounding the World Trade Center attacks on September 11, 2001 and the war in Iraq and the War on (of) Terror.

The lecture was met with a protest by faculty members and students. This is the first part of my film of the event, before the march began.

a spokesperson from Students for Justice in Palestine at UMN

representative from Veterans for Peace, Chapter 27

Below is the second video in the series featuring the protest against the Condoleezza Rice lecture at the University of Minnesota on April 17, 2014 featuring marching, along with passionate and heartfelt chants laced with strong disdain of war crimes committed in the name of war profiteering.

Below is the third and last video in the series featuring the protest against University of Minnesota’s Condoleezza Rice lecture on April 17, 2014.

The rally after the march took place outside the exit of the Northrup Building where Condi spoke and featured yet more passionate and heartfelt chanting, more public speaking and fans of Condoleezza Rice happily leaving the building.

The speakers in this video include: