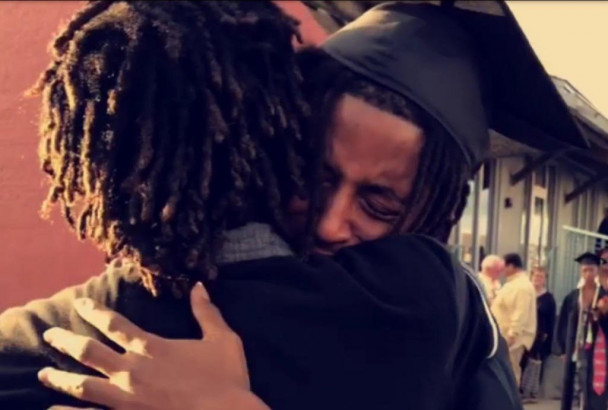 Above Photo: Ashana Bigard. Two students embrace outside a New Orleans Center for the Creative Arts graduation ceremony that many protested because of the high numbers of fellow students being expelled for minor, arbitrary infractions, and not allowed to graduate.

Many New Orleanians celebrated at the removal of confederate monuments around the city in recent weeks. But on the same day that Robert E. Lee’s bronzed image came down from Lee Circle, two black boys (like hundreds of boys throughout the city and state of Louisiana) were not allowed to graduate for arbitrary, punitive, and potentially illegal reasons.

The monuments may be gone, but structural racism continues to create barriers for students of color in New Orleans schools.

Take the cases of Rahsaan Ison and Rashaad Brown, both enrolled at the New Orleans Center for the Creative Arts. They had requested a tutor in Spanish, and one was provided to them under state and federal law protecting students with disabilities. But the tutor turned out to be so unprofessional that their school claimed he had cheated on a test by answering questions for them, and refused to accept any of their work, making it impossible for them to achieve their graduation requirements.

I acted as a student advocate for the boys, and I asked for an accommodation on the 504 plan so they could graduate with the rest of the class. Both Ison and Brown worked hard and had completed more than 621 assignments, and, according to computer records, they had passing grades. On the day of the graduation ceremony at 9:00am, they were told by their principal that they had another 1700 assignments to do that he had yet to “unlock.”

I son, who suffers with panic attacks, couldn’t breathe when he heard the news.

“Why?” he asked. “What kind of ugly set up is this? How can we do assignments if you didn’t even unlock them? Every hoop you gave us to jump through, we jumped and jumped and now you’re telling me I still can’t graduate with my class. Why?”

And if that is not enough to get your blood boiling, Ison was even featured in Teen Vogue, after NOCCA expelled him in his ninth grade year because he had crossed train tracks (which he didn’t know was forbidden) in order to save time and not be late for school. The story focused on the high numbers of students being expelled from schools for minor infractions.

On the same day Ison and Brown got the bad news, one of the principals at the Crescent City Leadership Academy marched in support of keeping the confederate monuments in place in New Orleans. He waved a confederate flag, and flashed white supremacist regalia, for which he subsequently lost his job. Social media went blew up: what was going on in the school and how could this man be a principal?

Take a closer look at discipline practices in schools such as NOCCA and schools all over the city of New Orleans you will see racism in action. Teachers, administrators, and staff who are looked up to as professionals and experts are white. The curriculum is imposed by white experts on black children, without input from black families or community members.

The best test of a good school is whether it employs developmentally appropriate discipline and parent engagement on every level, including in real decision-making. Are children with mental health and trauma issues being arrested? Are they being counseled by a certified counselor? Or are they simply being counseled out to any other school, or to the streets?

In New Orleans alone, a 2011 Justice Department investigation found that 98.6 percent of all children arrested by the New Orleans Police Department for “serious offenses” were black. The report concluded that the level at which black kids are arrested “cannot plausibly be attributed entirely to the underlying rates at which these youth commit crimes, and unquestionably warrants a searching review and a meaningful response from the Department.”

It has been said that white supremacy is not only alive and well, but he’s been running marathons through Louisiana’s education system and criminal justice system for many many years now.

In New Orleans, we have 26,000 young people between the ages of sixteen and twenty-four who are neither working nor in school. We have a 46 percent unemployment rate among black men in the city of New Orleans (and that doesn’t include the “chronically unemployed” who are no longer included in that 46 percent).

When Stalin’s statues came down in Russia, it was because the people had toppled the system—not just a statue. It was the dawn of a new era. We certainly cannot say the same thing about the system of racist oppression Lee’s statue represented.

One the same day of Lee’s statue came down, I watched as young people left their own graduation ceremonies in order to protest with classmates against racism. I watched them hold each other and cry over the injustice against which they struggle daily. Despite the disapproval of some of their families, they stood across the street from their own graduation celebration with fists in the air chanting, “no justice, no peace!”

Seeing the truth is hard, doing something about it is even harder. We can’t ask young people to walk out of their own graduations but not be willing to show up to support them. Our children are losing their lives by not being allowed access to a quality education. We’ve been fighting for a long time. Please join us.