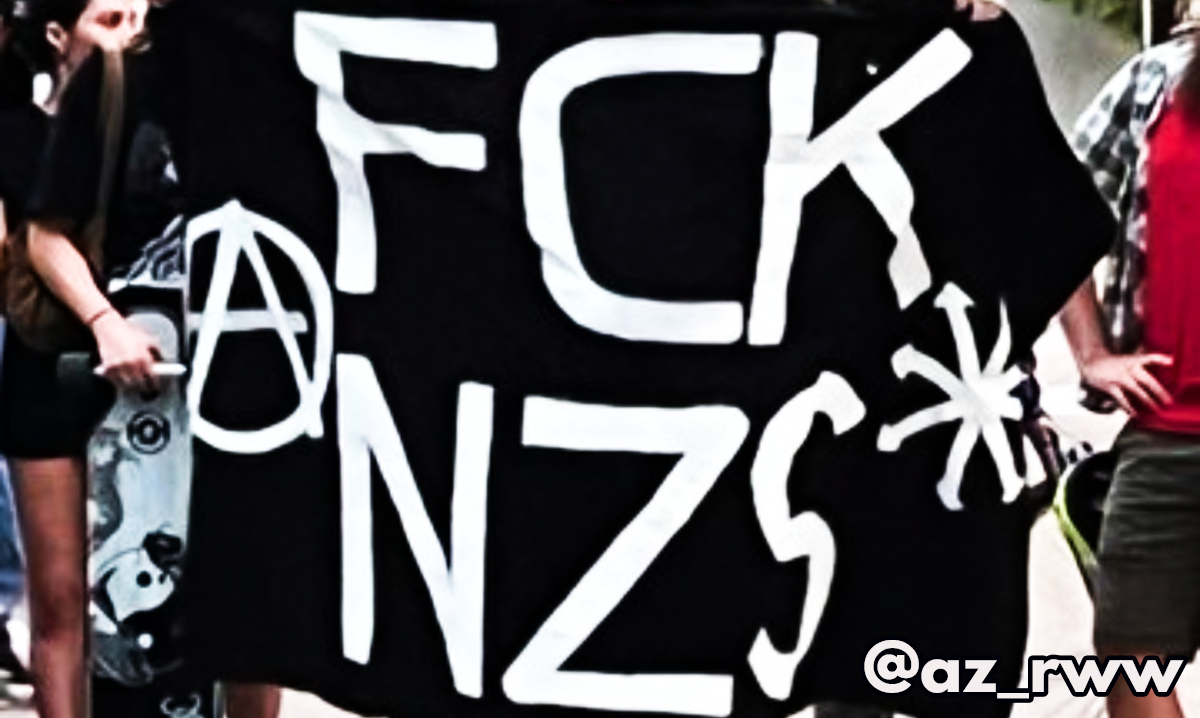 Confronting White Nationalism And the Limits Of The Campus Left

Report from anarchists in so-called Tempe, Arizona about organizing a counter-demonstration against white nationalist Jared Taylor on the Arizona State University campus.

Tempe, Arizona – Beneath the veneer of liberal civility at Arizona State University (ASU), located in Tempe, lies a long history of the campus welcoming white supremacists and fascists, excused by a hand-wave towards public university inclusivity. Such was the case when the Phoenix Anarchist Federation and the wider community received word that the College Republicans United (CRU), the even more grotesque sibling of the ASU College Republicans, had invited Jared Taylor to speak on campus. Taylor, a noted white supremacist who has gained notoriety as the brains behind the American Renaissance conference, which helped popularize fascist ideas to a broader and often younger audience, is not the first virulent fascist to be hosted by the CRU. In 2019, Baked Alaska, a scheduled speaker at the 2017 Unite the Right rally in Charlottesville, was a guest, followed by white nationalist and Groyper leader, Vincent James.

Created by Richard Thomas as a far-Right alternative to the College Republicans club, CRU has a history of promoting explicitly anti-Semitic, racist, and otherwise fascistic ideas, individuals and movements within their club , and they exist to spread this disgusting ideology within ASU’s student body. We decided we could not allow Taylor to speak without clear opposition, when we learned from one of our members who happens to be a student at ASU that this event was occurring.

In hopes of nipping the event in the bud, we moved to organize a phone zap, targeted at ASU president Michael Crow and the venue originally hosting the event. Despite the student body and broader community taking to the phones and emails en-masse, ASU’s response was predictable. Regardless of the threat it posed towards marginalized students and the widespread opposition to its continuation, the event would not be cancelled. Michael Crow himself stated via email, “Jared Taylor is one of many people today who exploit public forums of all types to engage in intentionally destructive and divisive rhetoric solely for the [sic] self-serving and attention getting purposes,” but that ASU was not able to refuse him a platform, due to restrictions placed upon them by state laws regulating the actions of public universities.

We find this justification to be flimsy, at best. ASU has refused speakers, despite concerns around so-called free speech, for several reasons, including the example of Mik Jordahl, who was banned from speaking due to his support of the anti-apartheid BDS movement and his refusal to sign a form stating he would not advocate for a boycott against Israel. It is clear to us that ASU picks and chooses who, exactly, receives the benefit of free speech on campus. They may find white supremacists somewhat distasteful to their liberal sensibilities, but they are acceptable guests, unlike those opposing ongoing genocide, even non-violently.

With ASU’s refusal to listen to marginalized students and community members, it became clear that we could not rely on the so-called authorities to hold to their stated principles and that we would need to fight in our own defense against the fascist ideologues. We began spreading the word of the counter rally and reaching out to a broad selection of ASU student groups, in the hopes of building a broad opposition against the fascists. While several of these organizations responded positively and many members of the student and local communities affirmed their willingness to directly oppose the event, a disappointingly paternalistic sentiment was shared by several of the political organizations, particularly of the Marxist bent. They shared a fear of direct confrontation and a sentiment that showing support for fighting fascism would invite danger against marginalized students, a frankly embarrassing position in the modern context. People are perfectly capable of making their own assessment of personal risk and there is a plethora of both modern and historical examples to show that mere passive opposition to fascist ideologues is not enough to slow the spread of these ideas, let alone destroy them entirely. With this in mind, it is worth pointing out that the rally was overwhelmingly attended by non-white and queer individuals, who took it upon themselves to step forward in their own defense, without needing permission from any political vanguard.

The rally was scheduled to take place thirty minutes before the beginning of the speaking event, at ASU’s Neeb Hall, an auditorium with a capacity of more than four hundred, where the event had been moved. Perhaps the CRU was hoping that all the eyes on their event would correspond with a large turnout. If this was their hope, it was in vain, as it seemed very few were brave enough to even come out, with only an estimated twenty to thirty attendees, compared to more than a hundred protestors at its peak.

The attendees were escorted by police and ASU security into the hall more than thirty minutes before the event, while more security established barricades around the entry, with a line of wannabe brownshirts standing guard. The rally commenced with a series of chants and speeches, a mixed bag of liberal and militant. To the attendee who called out that 2020 and Black Lives Matter was a “warning for fascists” and that the time for idle songs and chants was over, we wish the rest of the event had carried that energy, as despite a few moments of heightened tension most of the event remained docile. There was one moment, as a few attendees stormed the fascist line, full of angry zeal, that it seemed the rubber band would snap, but as quickly as the spark was struck, it was smothered by the swooping arrival of the peace police, who we suspect to have been undercover cops. The lines were again separated, and the rally continued on as before.

It was not long afterwards, however, that the speaking event was brought to an early end, for unknown reasons. Perhaps Taylor grew embarrassed by his low turnout, but regardless, the attendees left the hall in groups, with the first group attempting to slip out a side exit unnoticed. They were unsuccessful and were quickly spotted and chased by a group of heckling rally-goers. The other groups were escorted out by police and ASU security through neighboring buildings, followed most of the way by protestors. Jared Taylor himself was given a personal security retinue of eight cops, who held his hand all the way back to a waiting vehicle.

Our takeaway was thus: the broad support by the student population and local communities, despite the passivity of most of the political parties, shows that the people of Tempe and of Phoenix as a whole are fed up with the fascist menace. They are ready to fight back against the white supremacists who threaten them and their loved ones, but despite this, a certain docility chokes the activist milieu in Phoenix. Any hint of militancy is quickly co-opted, derided, or snuffed out. Calls for real action are struck down with liberal pragmatism or paternalizing concern, and we are left to watch as fascists organize without true militant opposition.