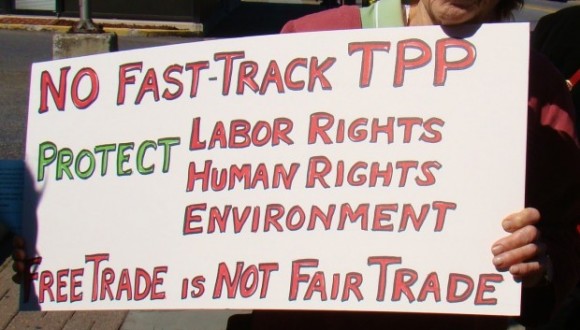 The Trans-Pacific Partnership (TPP) talks are stalling while the White House assures its trading partners that this secret trade agreement won’t be amended when it comes back to Congress for ratification after the President signs the deal. That’s why the Executive is scrambling to get its allies in Congress to pass Fast Track. If they succeed, the U.S. Trade Representative can block remaining opportunities for the examination of the TPP’s provisions by lawmakers who could ensure that this secret deal does not contain expansive copyright rules that would lock the U.S. into broken copyright rules that are already in bad need of reform.

The Fast Track bill is likely going to be introduced as early as next week—so it’s time to speak out now. Congress needs to hear from their constituents that we expect them to hold the White House accountable for the TPP’s restrictive digital policies. Unless this opaque, undemocratic process is fixed, and state officials uphold the interests of users rather than trampling our rights, we have no choice but to fight trade deals like the TPP.

You can get in touch with your elected representatives and call on them to oppose Fast Track trade authority for the TPP and other secretive, anti-user trade deals. We have also created a new tool for Twitter users to ask three key congressional leaders to come out against Fast Track. They are Sen. Ron Wyden, Rep. Nancy Pelosi, and Rep. Steny Hoyer. Here’s why we are targeting these three Congress members in particular.

Sen. Wyden is one of the leading defenders of users’ rights and a staunch fighter for the free and open Internet in Congress. For the past several years, he has been one of the most outspoken lawmakers denouncing the secretive TPP negotiations, and has consistently raised concerns about the agreement’s threat to users. As Ranking Member of the Senate Finance Committee, where the Senate bill will be introduced, he has a significant amount of influence over the outcome of Fast Track. We need to call on him to continue to stand with users and fight back against any version of this bill that does not address critical problems in the trade negotiation process.

House Minority Leader, Nancy Pelosi, has proven to be an outspoken defender of the free and open Internet this year, as she was one of the most vocal proponents to defend net neutrality. However, she has unfortunately been wishy-washy on Fast Track and the TPP. She needs to hear from users that the TPP also puts the Internet at risk from oppressive regulations. If she were to come out against Fast Track, that would be a strong signal for other House Democrats to follow her lead.

His voting record for digital rights has been pretty spotty, and so far Rep. Hoyer has been supportive of Fast Track. But as House Minority Whip, his opposition to Fast Track would also be hugely influential for Democrats in the House to come out against it as well.

Let them know that we’re counting on them to defend the Internet from the White House’s secret, anti-user deals. Once you’re done tweeting at them (which you can of course do more than once!), remember to share these actions through your social networks. We can defeat this massive, anti-user trade deal, but we’re going to need all the help we can get.